In a previous post I wrote about the US Bombing Encyclopedia of the World, designed as a global database of potential targets, but for more on a different but related project that I also previewed, a database of US bombs dropped from the closing stages of the First World War to the present, see this video from the US Air Force on its Project Thor [Theater History of Operations Reports]:

For the background to the project, look here.  And for a preview of its possibilities – the intention is apparently for the database to be open access in the near-ish future – here are two extracts from the World War I (1918) database: 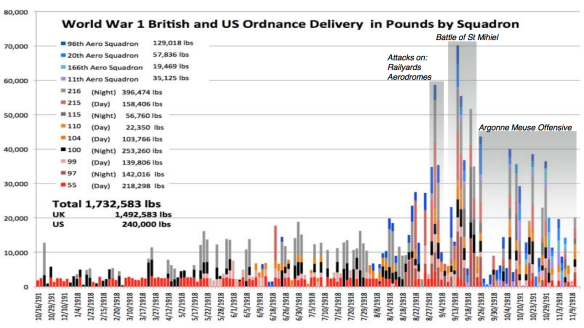 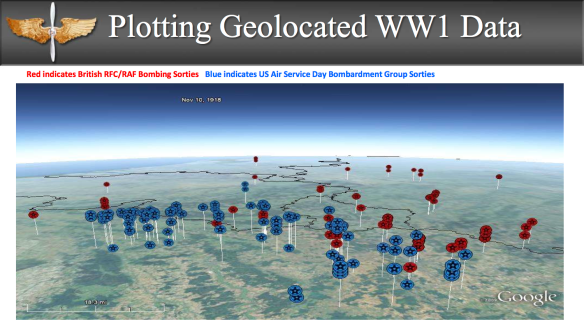 Although my own work focuses on the combined bomber offensive in World War II, the air wars over Indochina and the ‘drone wars’ over Afghanista, Pakistan and beyond, it’s not limited to these air wars, and I’ve been examining other periods and other theatres.  I’ll say more about my interest in World War I (and hence the reason for the extracts above) in a later post, but it was prompted by Orville Wright‘s arguments about the future of air war.  ‘I have never considered bomb-dropping as the most important function of the airplane,’ he told the New York Times in July 1917, ‘and I have no reason to change this opinion now that we have entered the war.’  For him – though he did not altogether discount the importance of striking particular targets, like the Krupp works at Essen – the key role of the aeroplane was reconnaissance (‘scouting’) for ground forces, including artillery:  ‘About all that has been accomplished by either side from bomb dropping has been to kill a few non-combatants, and that will have no bearing on the result of the war.’  (The use of the term ‘bomb-dropping’ rather than bombing was accurate – unlike the practice it described – and while there were air raids on towns and cities, carried out from aircraft and from Zeppelins, most air strikes during the War were tactical). 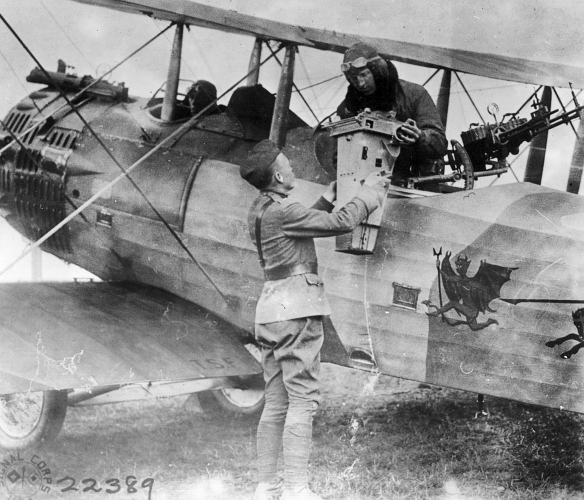 As we’ll see, aircraft were much more valuable for reconnaissance missions – here I’ve been learning much from Terrence Finnegan‘s Shooting the Front: Allied aerial reconnaissance and photographic interpretation (The History Press, 2011; first edition 2007) (reviewed for the CIA [really] here) –but Wright seemed in two minds about it insofar (in his view) it had prolonged the war:

“Did you ever stop to think that there is a very definite reason why the present war in Europe has dragged along nearly three years with neither side gaining much advantage over the other?  The reason, as I figure it out, is the airplanes.  In consequence of the scouting work done by the flying machines, each side knows exactly what the opposing forces are doing.

“There is little chance for one army to take another by surprise.  Napoleon won his wars by massing his troops at unexpected places.  The airplane has made that impossible.  It has equalized information.  Each side has such complete knowledge of the other’s movements that both sides are obliged to crawl into trenches and fight by means of slow, tedious routine rather than by quick, spectacular dashes.” 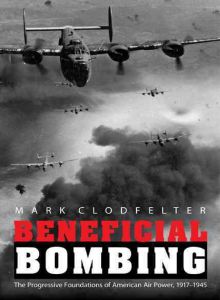 Ironically, it was precisely the subsequent rise of strategic bombing (what Mark Clodfelter calls ‘beneficial bombing’) that was hailed by its advocates as a way of bringing war to a speedy end and avoiding the carnage of the trenches.  Here is Clodfelter’s quick summary of a complex and convoluted argument (from Beneficial Bombing: the Progressive foundations of American air power, 1917-1945, University of Nebraska Press, 2010; see also his essay in Joint Forces Quarterly 49 (2008) 24-31 here):

‘The devastation and ugly realism of World War I ended the progressive era for most Americans…  Yet for Army Air Service officers like Edgar Gorrell and William “Billy” Mitchell, the carnage and waste that they witnessed on the Western Front sparked the beginning of a progressive effort that was unique – an attempt to reform war by relying on its own destructive technology as the instrument of change.  They were convinced that the airplane – used as a bombing platform – offered the means to make wars much less lethal than conflicts waged by armies or navies….

‘Aircraft would destroy the vital centers [of the enemy] by precision bombing – sophisticated technology would guarantee that bombs hit only the intended targets, and few lives would be lost in the process.  The finite destruction would end wars quickly … and thus bombing would actually serve as a beneficial instrument of war.’

My own project is, in part, designed to give the lie to these arguments and their successors.  And perhaps it will even be possible to enlist Project Thor to silence these dread thunderbolts (and Hellfire missiles).

4 thoughts on “Project Thor and the history of bombing”