An important post from Craig Jones about the capacity of the creative arts to respond to and even dislocate military violence that chimes beautifully with my previous post about War/Photography, and leads me into a notice of a research seminar at King’s College London (K2.29, Strand) at 6 p.m. on 5 February 2013:

‘i have come to everyday armageddon’: Spectacular and Slow Ruin in Gaza
Anna Bernard

The Israeli military’s 22-day attack on Gaza in the winter of 2008-9 provoked international condemnation to a degree that the region’s daily deprivation since 2007 under Israeli and Egyptian blockade had not. After the assault, images of the ruins of Gaza – its collapsed buildings, its disabled and impoverished residents – circulated widely. Beyond recording the immediate destruction caused by the attacks, however, these representations also sought to convey a different kind of ruin: the ‘slow violence’ (Nixon 2011) of Gaza’s humanitarian crisis. Anna Bernard will explore some of the visual and narrative attempts since 2009 to draw attention to the full scale of Gaza’s devastation, including photography by Kai Wiedenhöfer and poetry by Suheir Hammad. [The title is taken from Suheir Hammad’s poem GAZA, and the video shows Wiedenhöfer’s exhibition at the Musée d’Art Moderne in Paris in 2010].

Anna Bernard works on literary and cultural representations of Israel/Palestine in international contexts. She is the author of Rhetorics of Belonging: Nation, Narration and Israel/Palestine, forthcoming from Liverpool University Press.

While the Gaza Strip is often associated with images of ruins and destruction as a result of the continuous Israeli bombardment, the rubble of destroyed buildings has also become closely associated with the national cause. In 2009, a young artist living in Jabalia Camp turned her bombed house into an installation of a tank. Her message was that holding on to living spaces was as powerful as any military machinery. 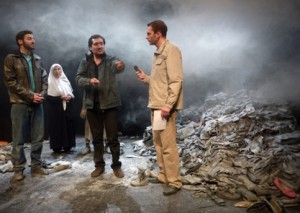 Ahmed Masoud will discuss the representation of ruins in his plays Go to Gaza, Drink the Sea (2009) and Unto the Breach (2012). Working with various set designers, Ahmed chose to represent rubble using different materials. In Go to Gaza, Drink the Sea (left) destruction was represented through a mountain constructed out of thousands of old shoes, while the set of Unto the Breach compiled a collage of ripped clothes, palates, paint pails and other broken and recyclable materials. Both sets represent the hardships, but also the resourcefulness, of ordinary people living under siege. They also reflect the process of making the set and shows with a very limited budget. 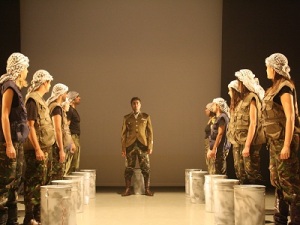 Ahmed Masoud is a Palestinian academic, writer and director. In 2005, he founded the Al Zaytouna Dance and Theatre Company. With Justin Butcher he co-wrote and directed the successful play Go to Gaza, Drink the Sea (2009), staged in London and at the Edinburgh Fringe Festival, and the BBC Radio 4 Play Escape from Gaza (January 2011). Ahmed also won the Muslim Writers Awards (sponsored by Penguin Books) in the unpublished novel category for his book Gaza Days. His latest show Unto the Breach (right) [a dance adaptation of Shakespeare’s Henry V] was performed at the Artsdepot Theatre in November 2012 and received critical acclaim.

All of this has prompted me to start serious work on a project I’ve had buzzing around my head for months now – a performance-work on bombing, past and present, using video, testimony, music, above all drama (and perhaps even dance).  The spur is partly my continuing frustration at conventional academic forms, partly admiration for my good friend Gerry Pratt‘s stunning drama-work Nanay (which has been performed in Vancouver and Berlin), now reinforced by Photog., and above all a desire to work on a collaborative project designed to engage the widest possible public.  Watch this space…