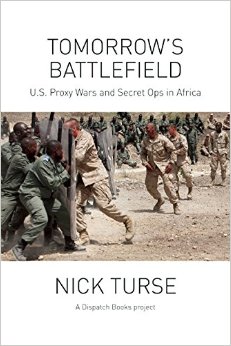 Just back from the AAG in Chicago, where I picked up a pre-publication copy of Nick Turse‘s new book, Tomorrow’s Battlefield: US proxy wars and secret ops in Africa (Haymarket) (and I have to say it was a relief to see Haymarket and Verso after the depressing parade of textbooks that dominated the publishers’ exhibition).

The book gathers together Nick’s reports for TomDispatch on US Africa Command; you can catch his latest here.

You won’t see segments about it on the nightly news or read about it on the front page of America’s newspapers, but the Pentagon is fighting a new shadow war in Africa, helping to destabilize whole countries and preparing the ground for future blowback. Behind closed doors, U.S. officers now claim that “Africa is the battlefield of tomorrow, today.” In Tomorrow’s Battlefield, award-winning journalist and bestselling author Nick Turse exposes the shocking true story of the U.S. military’s spreading secret wars in Africa.

The official publication is scheduled for early June, both paperback and e-edition.

Nick says very little about AFRICOM’s enlistment in the ‘war on Ebola’, which takes me back to the AAG conference where – amongst several other commitments – I revisited my previous posts (here and here).  In particular, I sketched out some of the ways in which a different West Point – the inhabitants of Monravia’s largest informal community – came to resist the militarisation of public health and to develop their own, remarkably effective community response to the epidemic.  More on this soon.