I’m in Toronto, enjoying ‘Through Post-Atomic Eyes‘ enormously: wide-ranging yet focused, creative and critical, and above all wonderfully welcoming.  I’m also relieved – I’ve only been wandering in the nuclear wastelands for a matter of months, and being surrounded by scholars and artists who know so much more about these vexed issues has been truly invigorating.  I’ll post the slides from my presentation shortly – in the meantime, see here and here – but while I was searching for images I re-discovered this cover from The Economist: 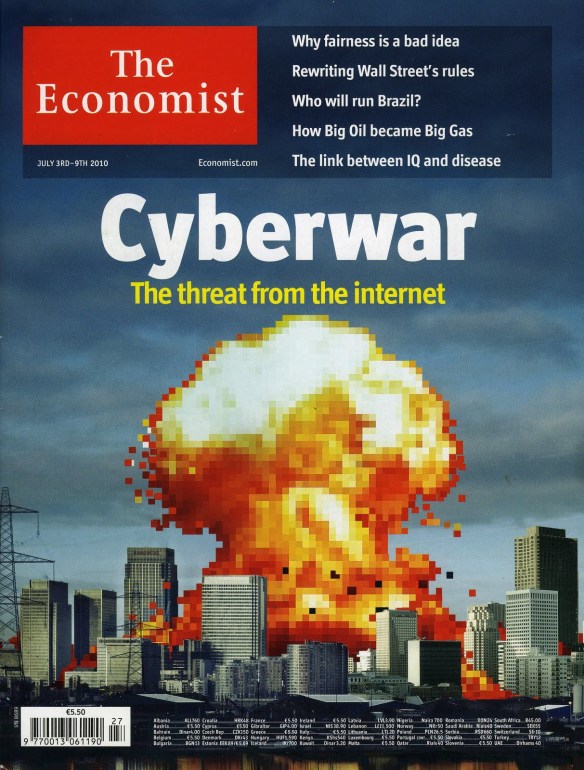 Since my own presentation tried to sort out the entangled geographies of nuclear weapons and drones, I would be the very last person to object to the continuity conjured up by The Economist‘s apocalyptic vision: in fact yesterday both Joseph Masco and James Bridle in two sparkling presentations emphasised the intimacy of  the connections between computing, nuclear testing and the security state.

So it seems appropriate that my  e-flânerie should also have led me to a special issue of CyberOrient, edited by Helga Tawil-Souri, is appropriately online now (and open access), devoted to cyberwarfare:

This special issue of CyberOrient engages with the relationships between “cyber” and “real” battlespaces, the mediatization of war, the need to expand our definition of warzones, and the importance of asking who participates in wars, to what ends, using what kinds of technologies, and for what purposes. Taken together, the five essays demonstrate the expansion and blurring of the spaces of war. As importantly, they highlight that even warfare that is “only” fought in the virtual realm is laced with violent intents and real-life repercussions. Not only can we not separate the cyber from the real so neatly, but we must not overlook that no matter how we wish to classify “new” or cyber wars, it is citizens, along with their ways of life and their cultural records, that continue to be by far the largest losers. 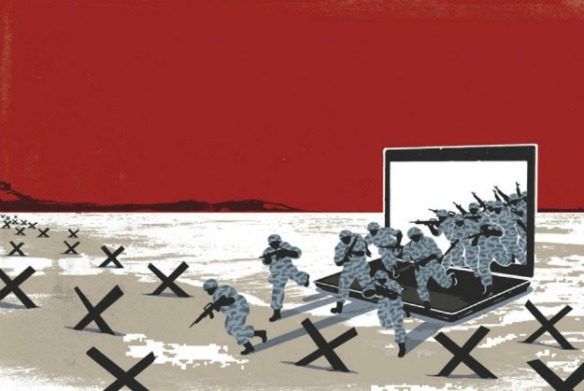 Donatella Della Ratta, Violence and visibility in contemporary Syria: an ethnography of the “expanded places”