As promised, I’ve posted the slides from my presentation on “Little Boys and Blue Skies: drones through post-atomic eyes” under the DOWNLOADS tab.  Given my previous posts (here and here) these ought to be reasonably self-explanatory, but I’ve added a series of images derived from Matt Farish‘s brilliant presentation “Beneath the bombs” at the same conference and these probably need explanation. 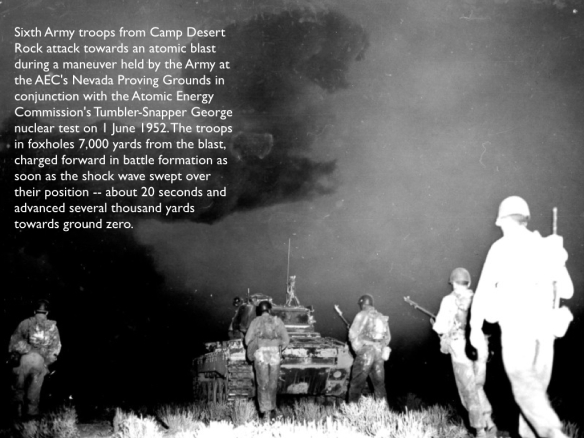 One of the central themes of my presentation was the emphasis placed on American lives by those who planned the attacks on Hiroshima and Nagasaki – which is why the crew of the Enola Gay had to execute such a tight turn to escape the shock waves from the blast – and by American commentators who almost immediately contemplated the possibility of a nuclear attack on the continental United States.

As I showed in the presentation, these same priorities have been extended to today’s use of armed drones by the US Air Force, which repeatedly cites its Predators and Reapers as ‘projecting power without vulnerability’.

All of this will be clear from my slides and posts. 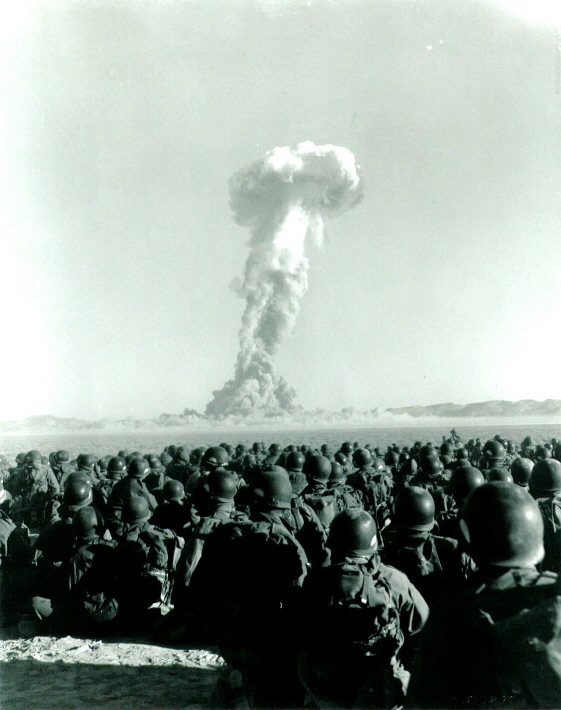 But what I didn’t know was that the US Army and Marine Corps had no such qualms about exposing the bodies of their soldiers and marines to the dangers of atomic tests.  Matt described a series of exercises in Nevada – Desert Rock – held between 1951 and 1957 in which ground troops not only watched the tests from a distance (this I did know: see the image above) but were also ordered forward to secure the blast area.  Here is an official video (watch from 3.00).

This is a silent film, but if you prefer a video with a jaunty, reassuring commentary you can find one from the Internet Archive here.  It’s accompanied by this transcript of an interview between a sergeant and a training officer before a blast:

Question. “How many of your men would volunteer to go up and be in the foxholes?” (one-half mile from ground zero)

Answer. “I guess about half a dozen.”

Question. “It’s quite a loud noise when that bomb goes off … would it do them any harm?”

Question. “How about the radiation? Do you think there is much danger?”

Answer. “Radiation is the least of their worries that the men are thinking about.”

Question. “I think most thought radiation was the greatest danger, didn’t they? Where did they learn differently?”

Answer. “They were, prior to our instructions here. We received a very thorough briefing.”

Part of the purpose of the tests was indeed to show how safe the tests were.  As Dr Richard Meiling, the chair of the Armed Forces Medical Policy Council, explained in a memorandum to the Pentagon on 27 June 1951:

‘Fear of radiation … is almost universal among the uninitiated and unless it is overcome in the military forces it could present a most serious problem if atomic weapons are used…. It has been proven repeatedly that persistent ionizing radiation following air bursts does not occur, hence the fear that it presents a dangerous hazard to personnel is groundless.’

Meiling recommended that ‘positive action be taken at the earliest opportunity to demonstrate this fact in a practical manner’, ideally by deploying a Regimental Combat Team ‘approximately twelve miles from the designated ground zero of an air blast and immediately following the explosion . . . they should move into the burst area in fulfillment of a tactical problem.’

In effect, Meiling wanted to conduct an extended psychological experiment in which the Test Site would become a vast human – as much as physical – laboratory.

According to a report from the Human Resources Research Organization:

By means of attitude measurement methods measuring psychological effects of stress, both applied at critical points during the maneuver, an attempt was made:

1. To evaluate effects of atomic indoctrination on troop participants; and

2. To estimate effects of the detonation together with its accompanying affects on performance.

I walked through an atom-bombed area. I didn’t get burned, I didn’t become radioactive, and I didn’t become sterile. And neither did the 5,000 guys with me. Furthermore, I wasn’t scared—either while taking my walk through the blasted miles, or while watching the world’s most feared weapon being exploded seven miles in front of me.

But, I’ve been asked a hundred times since the Desert Rock maneuvers at Yucca Flats in the Nevada atomic test site, “What was it like?”…

Suddenly it came. A gigantic flash of white light, bright as a photoflash bulb exploding in our eyes—even with our backs turned. The order “Turn” screamed over the public address system and 5,000 soldiers spun and stared. As we turned, it was as though someone had opened the door of a blast furnace as the terrific heat reached us. There, suspended over the desert floor, was the fireball which follows the initial flash of an atomic bomb.

Hung there in the sky, the tremendous ball of flame was too blinding to stare at, and suddenly there was much more to see.

Sucked into that fireball were the tons of debris from the desert floor. Almost at once dust clouds climbed hundreds of yards off the ground for miles in each direction. Then the familiar column of dirty gray smoke formed and started to rise.

Up to this point we had seen, but we had not heard and we had not felt, the explosion.

But then came the shock wave. The ground beneath us started to heave and sway. Not back and forth as you might expect, but sideways. The earthquakelike movement of the ground rocked us on our haunches and, had we been standing, it could have knocked us down.

About that time, our heads were snapped back with the force of the terrible blast as the sound finally crossed those seven miles and reached us. The tremendous crack was a louder one than most of us had ever heard before. And right behind it came another crack—there seemed to be some debate as to whether this was an echo or another chain reaction in the fireball.

From the throats of everyone there came noises. Noises, not words. I listened particularly for the first coherent statement, but, like myself, few people could voice normal exclamations. It was not something normal and words just wouldn’t come out—only unintelligible sounds.

The first words I did hear came from a caustic corporal behind me, who said, almost calmly, “Well, I finally located that damned Ground Zero.”

Our roar of laughter broke the tension, but the spectacle was far from over.

The horror turned to beauty. It isn’t difficult to associate the word beautiful with such a lethal exhibition, because from this point on, the atomic blast became just that—beautiful. A column rose from where the fireball had dimmed, crawled through the brown doughnut above the fireball, and boiled skyward. The dirty gray of the stem was rapidly offset by the purple hues and blues of the column. Then came the mushroom—the trade-mark of an atomic bomb.

Capped in pure white, the seething mushroom emitted browns, blood orange, pastel pinks, each fighting its way to the surface only to be sucked to the bottom and then back into the middle of the mass of white. Within minutes, the top was at 30,000 feet and then the huge cloud broke loose from the stem and drifted in the wind toward Las Vegas. . . .

This explosion had three lethal qualities. They were: blast, heat and radiation. The greatest fear the public has today in connection with the atom bomb probably is radiation. People forget that it caused only 15 per cent of the 140,000 deaths at Hiroshima.

One second after an air burst of an atom bomb, 50 per cent of the radiation is gone. All danger of lingering radiation has disappeared after 90 seconds.

As to the other two qualities, blast caused 60 per cent of the deaths at Hiroshima. Heat and the accompanying fires accounted for the other 25 per cent. . . .

As we moved up the road in the trucks, the effects of the blast became more apparent. About two miles from Ground Zero—and incidentally the bomber dropped his lethal egg in the proverbial bucket, right on the target—it became obvious that a terrible force had been at work.

At one of the closest positions we again left the trucks and walked through the charred area. Despite the devastation, there was no doubt that a successful attack could have been made by friendly troops directly through the blasted area—immediately after the explosion.

You can find much more here (scroll way down).  The purpose of reports like this was clearly to ‘indoctrinate’ a far wider audience than the US military.

All of this raises two questions.  One is about the radical difference between saving the lives of airmen and risking the lives of ground troops; the answer surely lies only partly in the insistence that there was no risk at all – since the Air Force clearly believed otherwise – and so must also lie in a dismal cost-benefit analysis that reckoned the cost (and time) involved in training aircrew against that involved in training ground troops.

Note: If you wonder about the long-term effects of the tests on residents of the area around the Nevada Test Site, see Harvey Wasserman and Norman Solomon, Killing our own: the disaster of America’s experiencewith atomic radiation, which is open access here (see chapter 3: ‘Bringing the bombs home’).

6 thoughts on “Atomic soldiers and the nuclear battlefield”