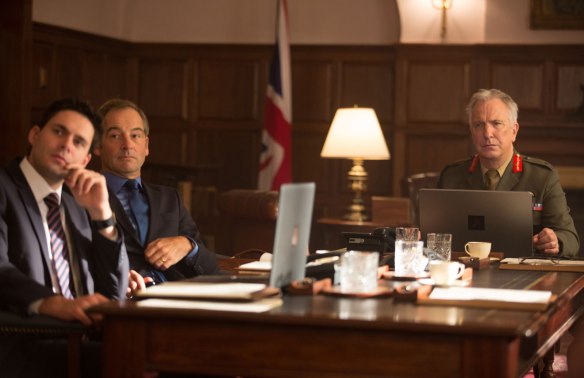 In my commentary on Eye in the Sky I emphasised the dispersed geography of command and responsibility involved, and it turns out that was a key concern of the film’s director Gavin Hood.  In an interview with Dan Gettinger for Bard’s Center for the Study of the Drone, he explains:

‘… we obviously designed the film frankly as a thought experiment; it is based on a very specific set of circumstances … these circumstances are not the circumstances of every drone strike. As you know, it is not the case that in every single drone strike the question of whether to fire or to not fire is referred all the way up the kill chain to the foreign secretary, or the prime minister, or in the case of the United States, the secretary of state, secretary of defense, or indeed the president. Depending on the geographical location of these strikes, different rules apply. If you are striking within an already defined conflict zone with clear rules of engagement, in areas such as Iraq or Afghanistan, then sadly this level of debate does not always happen. It very much depends on who is being targeted and where that target is taking place, as to whether the authorization of the strike is referred high up the kill chain.

In our case, in the case of the film, we wanted to create a scenario in which as much discussion as possible was possible within our film. We didn’t want to make a film where the discussion ended at the local commander level. That is a story that can and should be told—the story of the strikes over the tribal areas of Pakistan, for example, where signature strikes take place and where many civilians have been killed—but what we felt was helpful was to make a film which would allow many different points of view to be represented in order to help the conversation that is already underway, but which the public is not necessarily particularly aware of.’

It was partly for the same reason that Ainsley O’Connell travelled to Holloman Air Force Base in New Mexico for Fast Company: to see what the training program for the crews that operate the Air Force’s remote platforms reveals about today’s management.

Her extended report riffs off Tom Cruise‘s Maverick in Top Gun, and his boast that – like all pilots of conventional strike aircraft – ‘You don’t have time to think up there… If you think, you’re dead.’  In contrast, Ainsley reports:

The new Maverick represents the future of work in a fully global world dominated by complex machines, complex communications, and fluid, remote teams. A body of economic research produced over the last 15 years suggests that organizations are shifting to a model of work characterized by continuous learning and flat teams with complementary skill sets. In this model there is room for autonomy and improvisation, but it takes place in the context of managerial surveillance and shared goals. The military, though still wedded to its lock-step hierarchies, is not immune to the trend. And RPA crews, despite their image as video gamers operating in the dark, are arguably one of the best case studies for how the future of work will affect war and conflict.

She finds that remote crews have to develop not only ‘air awareness’ – since they don’t have the physical sensations of flight or situation available to conventional pilots – but also ‘social awareness’: the ability to collaborate and communicate with military actors across the network.

I discuss the layered bureaucracy – and its imperfect network – in more detail in ‘Reach from the sky‘ and will post the text of those two lectures soon (see also here).

In the meantime, there is an earlier report on the training program at Holloman by Corey Mead for the Atlantic here.