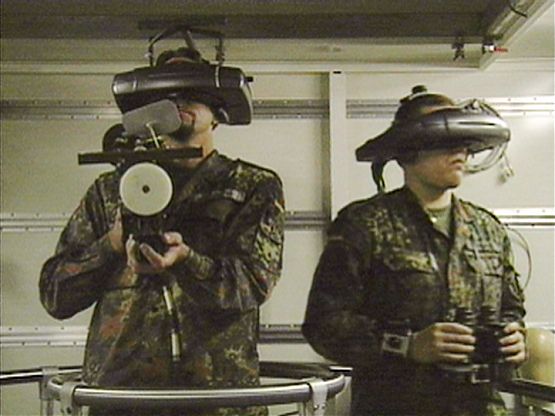 At the Or Gallery, 555 Hamilton Street, Vancouver: Security Theatre, an exhibition featuring works by Karl Burke, Harun Farocki, An-My Lê and the Bureau of Inverse Technology.

Security Theatre revolves around methods of simulation and documentation and their hold on respective truth claims about modern war. Specifically, this exhibition looks at how modern warfare is rationalised, remembered and portrayed across image based media such as electronic games, video and photography. The exhibition examines how these systems manifest and evolve into the 21st century, which sees war increasingly fought by proxy and through remote digital means. While claims of possessing the humanist high ground remain tied to the Western Bloc, they are no longer linked to the policy of deterrence seen in the 20th century, but instead are tied to myths of precision and expedience in a preemptive first strike context. Just as there were efforts in the 20th century to socialise people to the omnipresent threats of nuclearism, so too is there an effort to socialise people to the endless need for conflict underwritten by the ubiquitous threat of terrorist states and actors. This requires the creation of dissociative mental states. While the past mass dissociation of the Cold War addressed the need to prevent nuclear war by preparing for it, today’s dissociation follows the need to prevent terrorism by engaging in it. The technology used and the social conditions required were developed incrementally with the aid of experts in various fields, with the aim of gaining either tacit or explicit endorsement of so-called “security policies” which are largely maintained through obfuscation and manipulation. The artists included use media and techniques that provide an intrinsic sense of objective documentation when making reference to armed conflict and related events, which interpret and manage expectations of modern war.

The exhibition opens on 13 May and runs to 18 June; the gallery is open 1200-1700 Tuesday-Saturday, and admission is free.  More information (including profiles of the artists) here.