Commentators have been worrying away at the likelihood of terrorist groups turning to small commercial drones not only for surveillance – IS have been doing that for some time now (see the image above) – but also for air strikes (see, for a recent example, Robert J Bunker‘s report for the US Army War College here).  The surveillance capabilities of quadcopters have been used to direct attacks by IS ground forces, including vehicles carrying suicide bombs, but the Pentagon now reports that the drones have also been equipped with improvised explosive devices (IEDs).

In response, the Pentagon has asked for $20 million for its Joint Improvised-Threat Defeat Agency to develop counter-measures: to ‘identify, acquire, integrate and conduct testing’ of methods that are able to ‘counter the effects of unmanned aerial systems and the threats they pose to U.S. forces.’

Perhaps they should also look closer to home.  Two men in Connecticut have contested the right of the Federal Aviation Administration to investigate their use of ‘recreational drones’ equipped with a handgun and a flamethrower.  Here’s a video clip:

And other commentators are already looking beyond war zones: systems like these enable groups like IS – and individuals – to carry the fight far beyond the territory they control and into the heart of cities in North America, Europe and elsewhere.

Apologies for the long silence: the last month has been full of horrors, but it’s good to be back and there’s lots to catch up.  First – I’m easing myself back into this! – is a new book by Rosa Brooks, How everything became war and the military became everything, out next month:

The first serious book to examine what happens when the ancient boundary between war and peace is erased. 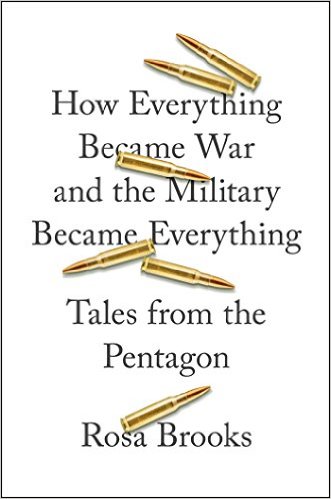 Once, war was a temporary state of affairs—a violent but brief interlude between times of peace. Today, America’s wars are everywhere and forever: our enemies change constantly and rarely wear uniforms, and virtually anything can become a weapon. As war expands, so does the role of the US military. Today, military personnel don’t just “kill people and break stuff.” Instead, they analyze computer code, train Afghan judges, build Ebola isolation wards, eavesdrop on electronic communications, develop soap operas, and patrol for pirates. You name it, the military does it.

Rosa Brooks traces this seismic shift in how America wages war from an unconventional perspective—that of a former top Pentagon official who is the daughter of two anti-war protesters and a human rights activist married to an Army Green Beret. Her experiences lead her to an urgent warning: When the boundaries around war disappear, we risk destroying America’s founding values and the laws and institutions we’ve built—and undermining the international rules and organizations that keep our world from sliding towards chaos. If Russia and China have recently grown bolder in their foreign adventures, it’s no accident; US precedents have paved the way for the increasingly unconstrained use of military power by states around the globe. Meanwhile, we continue to pile new tasks onto the military, making it increasingly ill-prepared for the threats America will face in the years to come.

By turns a memoir, a work of journalism, a scholarly exploration into history, anthropology and law, and a rallying cry, How Everything Became War and the Military Became Everything transforms the familiar into the alien, showing us that the culture we inhabit is reshaping us in ways we may suspect, but don’t really understand. It’s the kind of book that will leave you moved, astonished, and profoundly disturbed, for the world around us is quietly changing beyond recognition—and time is running out to make things right.