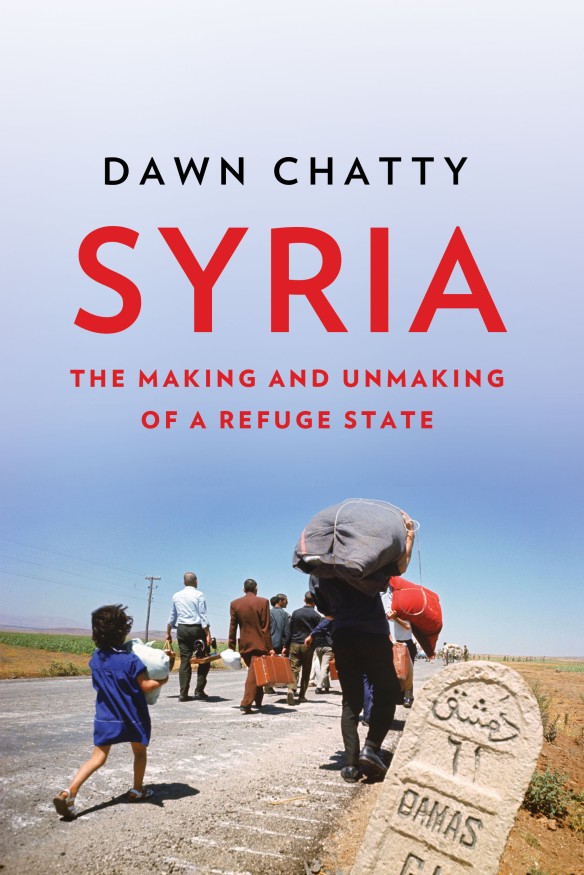 I’ve been working on the (very) long-form version of “Death of the Clinic”, so apologies for the silence: it’s been – and continues to be – utterly absorbing.  But I have managed to get my head sufficiently far above the water to notice this vital new book: Dawn Chatty‘s Syria: the making and unmaking of a refugee state (from Hurst in the UK and Oxford University Press elsewhere), out next month:

The dispossession and forced migration of nearly 50 per cent of Syria’s population has produced the greatest refugee crisis since World War II. This new book places the current displacement within the context of the widespread migrations that have indelibly marked the region throughout the last 150 years. Syria itself has harbored millions from its neighboring lands, and Syrian society has been shaped by these diasporas. Dawn Chatty explores how modern Syria came to be a refuge state, focusing first on the major forced migrations into Syria of Circassians, Armenians, Kurds, Palestinians, and Iraqis. Drawing heavily on individual narratives and stories of integration, adaptation, and compromise, she shows that a local cosmopolitanism came to be seen as intrinsic to Syrian society. She examines the current outflow of people from Syria to neighboring states as individuals and families seek survival with dignity, arguing that though the future remains uncertain, the resilience and strength of Syrian society both displaced internally within Syria and externally across borders bodes well for successful return and reintegration. If there is any hope to be found in the Syrian civil war, it is in this history.

Chapter One: Greater Syria at the end of the Ottoman Empire
Chapter Two: The Circassians and other Caucasian forced migrants reimagining a homeland
Chapter Three: The Armenians and other Christians seek protection and refuge
Chapter Four: The Kurds seeking freedom of religious expression
Chapter Five: Palestinians return to their ‘motherland’
Chapter Six: Sha’laan: a modern cosmopolitan quarter in Damascus
Chapter Seven: Iraqis and second wave Assyrians as temporary guests
Chapter Eight: The unmaking of a State, as Syrians flee the country

Here is Raymond Hinnebusch on the book:

Passionate and erudite, combining the intimacy of the anthropological eye with a broad historical sweep, Dawn Chatty tells the two-century story of Syria as a place of refuge. Beginning with Sultan Abdul Hamid’s creation of the muhajireen quarter of Damascus as a refuge for Muslims from Crete, Chatty further exposes the often-forgotten forced migrations of Muslims from the Balkans, Crimea, and the Caucasus; the story continues with the Armenians, Kurds, then the Palestinians and Iraqis. The last chapter recounts the tragedy of how Syrians have now become refugees from their own country.