May Jeong – whose excellent investigation of the US air strike on the MSF Trauma Centre at Kunduz I’ve commended before – has a new, equally enthralling extended report over at the Intercept on the sole survivor of a US drone strike in Kunar province in eastern Afghanistan on 7 September 2013: ‘Losing Sight‘.

It’s a long, rich read, but there are two issues I want to highlight.

First, May captures the stark, bio-physical horror of an air strike with an economy and force I’ve rarely seen equalled.  As I’ve noted before (see here and here), many critical analyses emphasise the bio-convergences that animate what happens behind the digital screens of the kill-chain and say remarkably little about those that lie on the other side.  It’s all too easy to lose sight of the embodied nature of remote warfare, though in another powerful essay Joseph Pugliese argues that it’s often not possible to speak of the corporeal at all in the face of such catastrophic violence: ‘The moment of lethal violence transmutes flesh into unidentifiable biological substance that is violently compelled geobiomorphologically to assume the topographical contours of the debris field’ ( ‘Death by Metadata: The bioinformationalisation of life and the transliteration of algorithms to flesh’, in Holly Randell-Moon and Ryan Tippet (eds) Security, race, biopower: essays on technology and corporeality (London: Palgrave, 2016) 3-20).

So here is May describing the strike on a pick-up truck in the early evening as it ground its way along a rough road through the Pech Valley; inside the cabin were the driver, three women and four young children, while seven men were crammed into the back along with sacks of flour they had bought to take back to their village.  There were a couple of miles from home, Gambir, when five missiles hit the truck in a 20-minute period.  Minutes later a second truck – which had been racing to catch up with the first – arrived close to the scene.  The driver (Mohibullah) scrambled up a small hill with a local villager: 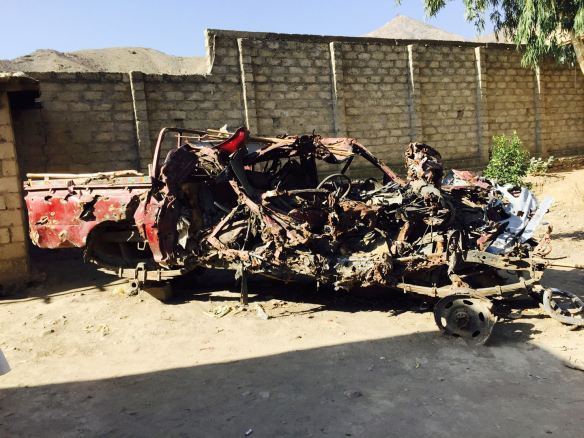 [T]hey saw the husk of the pickup, strafed and lit up in flames. They hurried toward the fire.

When Mohibullah arrived at the blast site, he saw that of the 17 bags of flour he had helped load onto the truck, just two were intact. The rest had splayed open. There was a sick beauty to the scene — white powder over blood-red carnage.  These were men and women Mohibullah had grown up with, but he couldn’t recognize any of them. Their mangled body parts made it difficult to ascertain where one person ended and another began: spilled brains over severed limbs over ground flesh…

At first, it was just Mohibullah, another driver named Hamish Gul, and three villagers from Quroo who came to help. Most people in the area knew to stay away. The ghanghai [drones] often attacked again. Even so, the five of them worked at untangling the dead bodies — among them Aisha’s mother, father, grandmother, and little brother — and stacking them in neat rows atop the bed of Mohibullah’s truck.

Astonishingly, there was one survivor, but she too had been brutalised beyond recognition:

Mohibullah did not recognize the girl — her face had been “scrambled, she didn’t have her nose.” She still had both of her legs, but he wasn’t sure if her torso was connecting them to the rest of her body. It wasn’t until she asked in a frail voice — “Where is my father? Where is my mother?” — that he understood her to be his 4-year-old niece Aisha…

A neighbor named Nasir held Aisha together for the drive back to Gambir. During the 2-mile journey, Aisha did not make a sound. Life seemed to be slipping away from her. Nasir assumed she would be buried. But when they arrived in Gambir, Aisha turned her head and asked for water. Her voice was so full of intent that they decided to rush her to a hospital in Asadabad.

Read those paragraphs again to see what Pugliese means.

Now the second issue starts to come into focus.  They reached Asadabad Provincial Hospital at 10 p.m., but the duty nurse could do little for Aisha:

Her stomach was missing, as were parts of her face and her left arm. He registered her into the hospital database, writing “acute abdominal injuries” next to her name, treated her with basic first aid, and sent her to the nearest hospital in Jalalabad, 57 miles away.

Aisha reached Jalalabad Public Health Hospital shortly after midnight, where her burns were dressed.  But here too there was little the surgeon could do; she had multiple head injuries, had lost one of her hands, and had major internal injuries.  A helicopter was called to take her to Kabul but it couldn’t land; a second helicopter arrived at midnight – 24 hours after she had reached Jalalabad – and ferried her to the French military hospital at Kabul Airport. 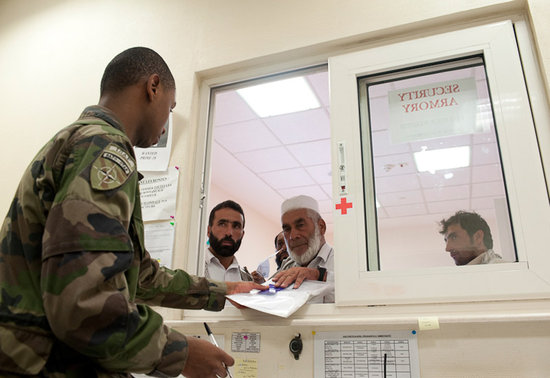 Like other Role 3 hospitals, the facility was tasked with ‘damage-control’, for which it could call on three surgical teams rotation with a general surgeon, (abdominal, chest or vascular surgery) and an orthopedic surgeon as well as an ophthalmologist,  a neurosurgeon and an ENT or maxillofacial surgeon (I’ve taken these details from O. Barbier and others, ‘French surgical experience in the Role 3 Medical Treatment Facility of KaIA (Kabul International Airport…’, Orthopaedics and Traumataology: Surgery & Research 100 (6) (2014) 681-5; see also Christine Joubert and others, ‘Military neurosurgery in operation’, Acta Neurochir 158 (8) (2016) 1453-63).

While Aisha was being treated the hospital was visited by Afghan President Hamid Karzai.  Here is May again:

There, Karzai was confronted with a girl who had lost her sight, her nose, her lower lip, the skin on her forehead, the skin on her torso, her left hand, and nine members of her family, including her grandmother, her uncles, her aunts, her cousin, her mother, her father, and her baby brother.

“I cannot describe what I saw there,” Rangin Spanta, who served as national security adviser under Karzai and accompanied him to the hospital that day, told me from his home in Kabul. We were sitting on a rattan set on his front porch. In telling this story, Spanta covered his face and wept. “Still I have my trauma.” Spanta had lost five family members in the war, but the sight of Aisha, a girl who had been reduced to a “piece of biological construct,” gave him “the feeling that this was a kind of a nightmare.” Spanta, who had seen the guts of suicide bombers splattered across his car window and has visited double, triple, and quadruple amputees, said Aisha was the “most shocking thing I’ve seen in this war.” Karzai asked the attending doctor why her face was covered. “Because there is nothing there” was the answer.

That a high proportion of patients the military hospital were Afghan civilians was by no means unusual for a Role 3 facility, but as I’ve noted before ISAF had strict Rules of Medical Eligibility.  Afghan civilians who were injured during military operations and/or needed ‘life, limb or eyesight saving care’ – both of which applied to Aisha – could be admitted to the international medical system.  But as soon as possible, Afghans were to be treated by Afghans and so, after surgical intervention, they had to be transferred to the local healthcare system. 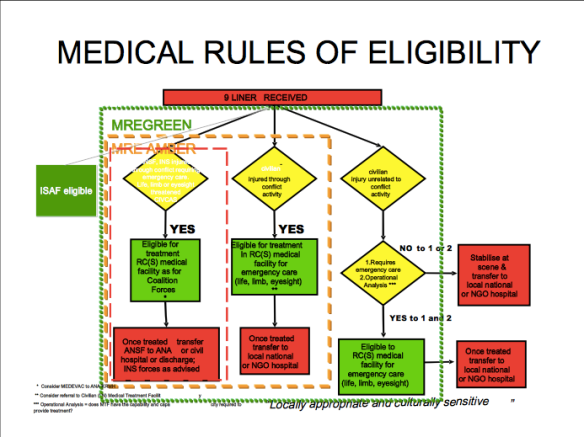 That system was – is – often rudimentary, which is why Aisha was passed from Asadabad to Jalalabad before reaching Kabul.  And returning someone in her post-operative condition to that system was obviously fraught with danger.  Here is Emily Mayhew in A Heavy Reckoning describing the dilemma for doctors at the Role 3 hospital at Camp Bastion in Helmand province:

Some of the most difficult decisions taken by the Deployed Medical Director related to local patients, Afghans civilians, their families and others. Locals made up the majority (probably as much as 80 per cent) of the patients cared for during the lifetime of the hospital. During the war there were no Afghan hospitals with the technology or capability to ventilate patients with severe chest wounds, therefore leaving Bastion meant death. So anyone intubated who could not be returned to Britain had to stay at Bastion until they could breathe unaided, which sometimes took days or weeks. They were discharged only when it was certain they could survive away from Bastion: probably in a local hospital that was under severe stress, and which could only provide medical care for two or three hours a day, where the rest of the time they would be looked after by their families.

I’ll return to this in a later post, because in some cases those local hospitals have been supplemented and even supplanted by more advanced medical facilities operated or supported by international NGOs like Emergency or MSF.

But what is extraordinary in Aisha’s case is that her pathway did not follow any of these routes.  Karzai had asked both the French and the Germans to help, but they deferred to the Americans who insisted that she be taken to the United States for further treatment.  ‘Twelve days after the strike,’ May reports, ‘Aisha was gone’: but nobody ever told her relatives what had happened to her.  Every attempt they made to find out was rebuffed.

Months later her uncle was informed that she was at Walter Reed hospital in Maryland; she had been sponsored by an American organisation, Solace for the Children.  According to its website:

Each Summer Solace for the Children Summer Medical Program brings children from areas affected by war to the United States so they may receive medical care unavailable to them in their country. We currently focus our efforts on children in Afghanistan. Each fall, applications are accepted for treatment. Our office in Afghanistan typically receives more than 50 applications they must review and qualify. Youth are qualified for services based on need and health condition. They are then placed with a host family for approximately 6 weeks while receiving the medical care they require. After care, youth return to Afghanistan with a better quality of life, brighter future and hope for peace.

While ‘there was no official relationship between the U.S. military and Solace,’ May was told by the charity’s director Patsy Wilson, ‘individual members of the military often reached out to Solace, which had been the case for Aisha.’

“We just get calls. We get calls from the military all over Afghanistan,” she said. She repeatedly deferred to the military, stating, “I am sure they don’t say we kidnap children.” Wilson also expressed doubts that Aisha had been injured in a drone strike, despite the claims of scores of villagers interviewed by The Intercept. “We do not necessarily believe Aisha was in a drone strike, but I know that is one of the stories,” she said. When pressed for details, she said, “I have been told not to discuss that,” adding, “We have no facts. There are no facts.”

Those last sentences are becoming all too familiar, but in this case ISAF not only acknowledged the ‘IM [international military] aerial attack’ but carried out its own investigation into the civilian casualties.  It has never been declassified.