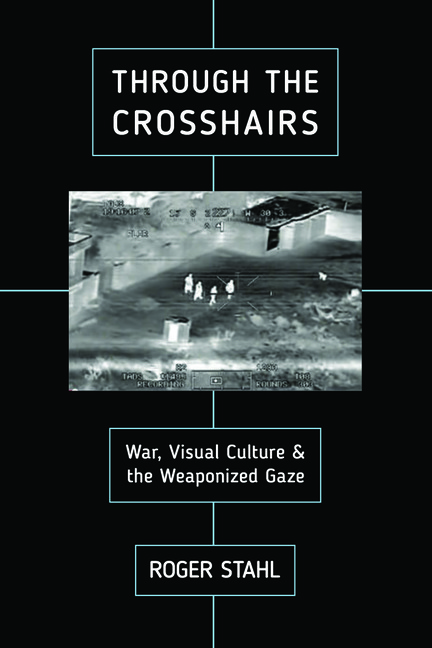 First, from the ever-interesting Roger Stahl: Through the Crosshairs: War, Visual Culture, and the Weaponized Gaze (Rutgers).

Now that it has become so commonplace, we rarely blink an eye at camera footage framed by the crosshairs of a sniper’s gun or from the perspective of a descending smart bomb. But how did this weaponized gaze become the norm for depicting war, and how has it influenced public perceptions?

Through the Crosshairs traces the genealogy of this weapon’s-eye view across a wide range of genres, including news reports, military public relations images, action movies, video games, and social media posts. As he tracks how gun-camera footage has spilled from the battlefield onto the screens of everyday civilian life, Roger Stahl exposes how this raw video is carefully curated and edited to promote identification with military weaponry, rather than with the targeted victims. He reveals how the weaponized gaze is not only a powerful propagandistic frame, but also a prime site of struggle over the representation of state violence.

And here’s Lisa Parks on the book:

“Immersing readers in the perilous visualities of smart bombs, snipers, and drones, Through the Crosshairs delivers a riveting analysis of the weaponized gaze and powerfully explicates the political stakes of screen culture’s militarization.  Packed with insights about the current conjuncture, the book positions Stahl as a leading critic of war and media.”

Incidentally, if you don’t know Roger’s collaborative project, The vision machine: media, war, peace – I first blogged about it five years ago – now is the time to visit: here. 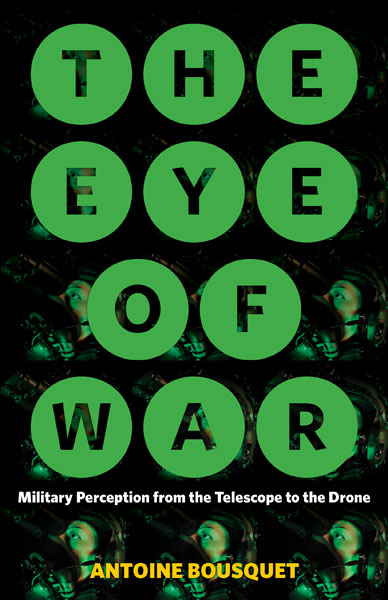 And from Antoine Bousquet, The Eye of War: military perception from the telescope to the drone (Minnesota):

From ubiquitous surveillance to drone strikes that put “warheads onto foreheads,” we live in a world of globalized, individualized targeting. The perils are great. In The Eye of War, Antoine Bousquet provides both a sweeping historical overview of military perception technologies and a disquieting lens on a world that is, increasingly, one in which anything or anyone that can be perceived can be destroyed—in which to see is to destroy.

Arguing that modern-day global targeting is dissolving the conventionally bounded spaces of armed conflict, Bousquet shows that over several centuries, a logistical order of militarized perception has come into ascendancy, bringing perception and annihilation into ever-closer alignment. The efforts deployed to evade this deadly visibility have correspondingly intensified, yielding practices of radical concealment that presage a wholesale disappearance of the customary space of the battlefield. Beginning with the Renaissance’s fateful discovery of linear perspective, The Eye of War discloses the entanglement of the sciences and techniques of perception, representation, and localization in the modern era amid the perpetual quest for military superiority. In a survey that ranges from the telescope, aerial photograph, and gridded map to radar, digital imaging, and the geographic information system, Bousquet shows how successive technological systems have profoundly shaped the history of warfare and the experience of soldiering.

A work of grand historical sweep and remarkable analytical power, The Eye of War explores the implications of militarized perception for the character of war in the twenty-first century and the place of human subjects within its increasingly technical armature.

And here is Daniel Monk on the book:

The Eye of War is a masterful contemporary history of the martial gaze that reviews the relation between seeing and targeting. The expansion of ocularcentrism—the ubiquitization of vision as power—Antoine Bousquet shows us, coincides with the inverse: the relegation of the eye to an instrument of a war order that relies on the sensorium as the means to its own ends. As he traces the development of a technocracy of military vision, Bousquet discloses the vision of a military technocracy that has transformed the given world into units of perception indistinct from ‘kill boxes.’