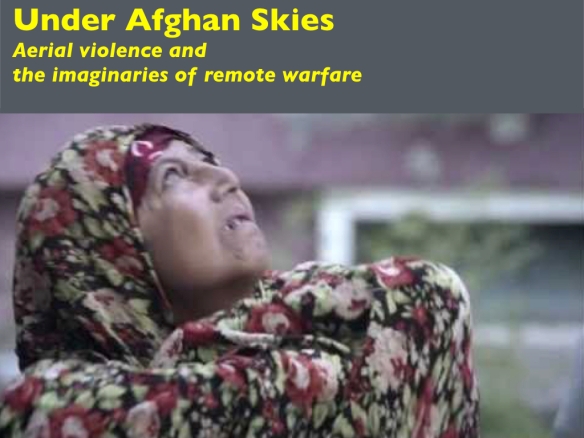 In what seems like another lifetime, although it was only last month, I spoke at a wonderful conference on “The Aesthetics of Drone Warfare“, organised by Beryl Pong and her team at the University of Sheffield.

I gave a new version of my research on the Uruzgan air strike that has preoccupied so many critics of drone warfare.  You can find earlier versions here and here, and I discussed the aftermath of the strike and the fate of the casualties in an essay called “Eyes in the Sky, Bodies on the Ground” which you can find under the DOWNLOADS tab [the original appeared in Critical Studies on Security 6 (2018) 347-358]. The Sheffield talk will eventually be online, though like so much else in these difficult times I’m sure that’s been delayed.  I’ve also given developing versions of the argument at several other conferences, under various titles; ‘developing’ because I haven’t been able to let it go.  Each time I dive back into the archival materials I seem to find something new – that’s in the nature of archival research, I think – but I’ve now been able to work up what is, I hope, the near-final written version.

This will be the last Part (I had hoped ‘chapter’, but it’s too long for that) of my new book, Reach from the Sky, which is intended to be both a geography and a genealogy of aerial violence.  Over the next several weeks I’ll be posting the essay here in serial form – interspersed, I suspect, with other notices: I’ve decided to return to blogging at something like my old pace – and I would be truly grateful for any comments, questions or suggestions (at derek.gregory@ubc.ca).

Trying to piece together what happened has been like playing multi-dimensional chess (I imagine: I’ve never tried), which is why there are so many notes.  As I worked on this version I realised that I had become so immersed in the narrative that I had started to take for granted contextual information that many, perhaps most readers probably wouldn’t have: hence the need to explain as I go, without breaking the flow. I hope you’ll let me know if it works.

One last rider: I’ve tried to keep the overt theory to a minimum, and for two reasons.  The first is that for me – now, anyway! – theory works best in solution, diffused into my presentation of the empirical materials with which I’m (also) working. Theory makes my argument possible, but in my experience it rarely survives its encounter with the archive intact (nor should it): it’s a medium, something to be worked with and constantly re-made.  It’s also – like the narrative that I will present in the coming weeks – always open and incomplete, an intellectual force-field of tensions and contradictions, because there is no one Theory that asks all the important questions or provides all the convincing answers.  So I’m obliged to work in the space between competing perspectives rather than seek some meta-theoretical resolution; there are decisions that still have to be made – of course: not all perspectives are valid – but I have refused to nail my colours to a single mast and have that determine my direction of travel.

More directly: the world does not exist in order to provide examples of our theorisations of it.  My interest here is in the fate of all those Afghan civilians who were killed and injured on 21 February 2010 and in what that might tell us about aerial violence and nominally ‘remote’ warfare.  And this brings me to my second reason.  Much of what I’ve read on ‘drone warfare’ seems long on theory but short on substance.   There are, of course, essays that activate theory to provide sensitive and illuminating insights into the conduct and consequences of aerial violence, and you’ll see that I’m indebted to many of them.  To  bring those ideas into a close engagement with the empirical – transforming both in the process – is a slow, delicate and time-consuming process.  It’s also, I hope, a collaborative one: which is where you come in….

More to come.  Stay safe and be well.

3 thoughts on “Under Afghan Skies: prologue”