I’m Peter Wall Distinguished Professor and also Professor of Geography [the two are different!] at the University of British Columbia in Vancouver. I’m British; I was educated and I taught at the University of Cambridge until moving to UBC in 1989; I’m a Fellow of the British Academy and a Fellow of the Royal Society of Canada; and I’ve been awarded honorary degrees from one of Europe’s youngest (Roskilde) and oldest (Heidelberg) universities, and I’m also an Honorary Fellow of King’s College London.  More information here.

For the record: despite the rise of what I now think of in the Age of Trump as anti-social media, I’m not on Facebook (I prefer real friends) and I don’t tweet (life is too full to be fitted into 140 characters, unless you are the President of the United States); neither am I on academia.”edu” (you can find most of my recent writings and drafts under the DOWNLOADS tab).  You can contact me at derek.gregory@ubc.ca. 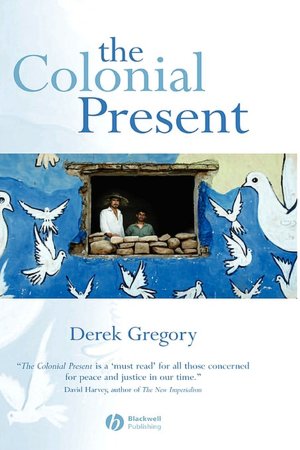 Much of my research and writing since The colonial present: Afghanistan, Palestine, Iraq (Oxford: Blackwell, 2004; reprinted 10 times) has concerned what I call later modern war.  I’m presently working on five research/book projects.  For the first time in my life, I’ve decided to write these without a publishing contract; I want to write my own book(s) without pressure and without arbitrary deadlines, and then I’ll approach resolutely non-academic publishers with the manuscripts:

The everywhere war: Its main focus is on US military power and violence, though there are excursions that address other advanced militaries (Britain, Israel).  It’s organised around three main sections, each of which corresponds to one of the ‘performances of space’ that I discuss in much more detail in the opening essay (and in “War and peace”, Transactions, Institute of British Geographers 35 (2010) 154-86).  The first, ‘Locating’, refers to the production of the space of the target, and includes essays on targeting on the ground and from the air and maps the transition from deliberative to dynamic targeting and from an object-ontology to an event-ontology.  The second, ‘Inverting’, refers to the production of the space of the enemy Other, and includes essays on Orientalism, the cultural turn and counterinsurgency and on the biopolitics of Baghdad.  The third, ‘Excepting’, refers to the production of the legal-lethal space of the exception, and includes essays on Guantanamo, Bagram and the global war prison.  Taken together, L-I-E provides a sharp acronym…  The final essay, ‘The everywhere war’,  provides a complementary characterisation of late modern war through discussions of  the Afghanistan-Pakistan borderlands, the US-Mexico border, and cyberspace.  Original versions of many of these essays are available under the DOWNLOADS tab, but I’m radically revising them for the book.

Killing Space: This is a study of the histories/geographies of bombing, focusing on three main campaigns: the combined bomber offensive against Germany in World War II, the US air wars over Vietnam, Laos and Cambodia, and the ‘drone wars’ over Afghanistan-Pakistan, Yemen, Somalia and elsewhere.  The original research proposal, together with some essays from the project, are available under the DOWNLOADS tab.  Since starting on this, I’ve also developed a sub-project on Militarized vision – there are multiple posts on the blog that refer to this in one way or another – that addresses the In)capacity of advanced militaries to maintain near real-time ‘eyes on the target’; I look at drone strikes and their Full Motion Video feeds, but I’m also interested in the networked political technologies of vision that are involved in attacks by conventional strike aircraft and combat helicopters in Afghanistan, Iraq and elsewhere.

Deadly embrace: war, distance and intimacy:  This had its origins in my British Academy Lecture in March 2012, and is rapidly taking on a life of its own.  Contemporaries often claim that one of the diagnostics of contemporary warfare is its capacity to inflict military violence from a distance – and yet, while the modalities for doing so have undoubtedly changed, the capacity to wage war over a distance has a much longer history (and a much more complicated geography).  Here I focus on information (how publics are informed about distant wars waged in their name); intelligence (how states and their militaries know the enemy and the battlespace); logistics (how people and materials are transported to and from war zones); and weapons (the changing range over which violence is inflicted).

War material: Since I despair at those who think that all we need to know about war and military violence was anticipated by Foucault in his Paris lectures – so that they are somehow absolved from doing any substantive research of their own into the materialities of modern war: something that would surely have horrified Foucault – I’m bringing together a number of essays that explore the ways in which war has (and has not) changed since 1914 under the title War material.  These will include expanded versions of ‘Doors into nowhere’, ‘Lines of descent’, ‘Gabriel’s map’ and ‘The natures of war’ (all available under the DOWNLOADS tab) and packed with images….  There will also be an introductory essay and – since these are all, in different ways, investigations into the killing fields – perhaps a closing essay from my ‘Wounds of War’ project on casualty evacuations, 1914-2014.

Wounds of war: My latest project examines how casualties (by which I mean both the wounded and the sick, both military and civilian) are evacuated from war zones, and the intersecting roles of military and civil-humanitarian medical machines in medical care and evacuation.  The study focuses on the Western Front, 1914-1918; the Western Desert of North Africa in the Second World War; Vietnam during the American war; and Afghanistan today.  The original, draft proposal is available under the DOWNLOADS tab.  A side-project concerns contemporary trans-border evacuations of the sick and wounded from conflicts in Libya, Iraq and Syria.

Most of the postings on this blog flow from these projects, but I do address other themes and topics from time to time.