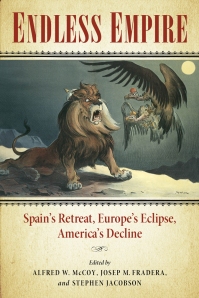 Oliver‘s favourite historian, Alfred McCoy, recently co-edited a fine new collection, Endless Empire: Spain’s retreat, Europe’s eclipse, America’s decline (University of Wisconsin Press, 2012), and there’s an excellent taster of McCoy’s argument at both Tomdispatch and Guernica.  The title – ‘Beyond bayonets and battleships’ – is not only a rejoinder to Romney’s complaint during the last Presidential debate; it’s also a reply to Obama and his predecessors. 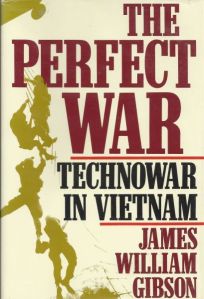 McCoy traces the long historical curve of what, in another age, was called America’s techno-war: the phrase comes from James Gibson’s stunning The perfect war: technowar in Vietnam (Monthly Review Press, 1986; Atlantic, 2000), and like Gibson McCoy insists on the importance of the wars in Indochina for the matrix within which late modern war is now conducted.

Many of his themes resonate with my own work – the key elements for today’s remote operations were assembled over the skies of Vietnam, Laos and Cambodia, and these have been radically extended by biometric identification, electronic surveillance and cyberwarfare – and McCoy also peers into a not-do-distant but desperately dark future in which the contemporary politics of verticality and what Stuart Elden describes as projects to ‘secure the volume‘ will be dwarfed by a triple-tier canopy (‘Just how high is national sovereignty? … Some puckish Pentagon lawyer might reply: only as high as you can enforce it’):

It’s 2025 and an American “triple canopy” of advanced surveillance and armed drones fills the heavens from the lower- to the exo-atmosphere.  A wonder of the modern age, it can deliver its weaponry anywhere on the planet with staggering speed, knock out an enemy’s satellite communications system, or follow individuals biometrically for great distances.  Along with the country’s advanced cyberwar capacity, it’s also the most sophisticated militarized information system ever created and an insurance policy for U.S. global dominion deep into the twenty-first century.  It’s the future as the Pentagon imagines it; it’s under development; and Americans know nothing about it.

I’m drafting the introduction to The everywhere war now, and this is a superb essay for me to engage – if you read one thing this week, make it this.