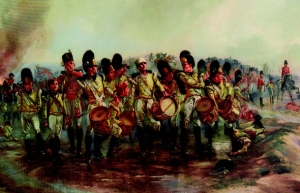 Vanessa Barford‘s BBC essay – ‘What does war sound like now?‘ – complete with sound clips adds more dimensions to my previous post on the sounds of war:

Particular noises are associated with particular conflicts, both by those who watch the news and soldiers and civilians who experience it firsthand….  Some sounds – the silence of shock, the pain of the wounded and the cries of bereaved relatives – unite all wars. But others, in many ways, help define a conflict.’

The short report travels from the drumbeats and bugle calls that were used to control the battlefield of the eighteenth century to the sounds of drones, missiles and shells over Gaza.

Writing in the New Yorker, Wasseem el Sarraj provides a much more detailed (and far more harrowing) account of the soundscape of Gaza City:

In our house we have become military experts, specializing in the sounds of Israeli and Palestinian weapons. We can distinguish with ease the sound of Apaches, F-16 missiles, drones, and the Fajr rockets used by Hamas. When Israeli ships shell the coast, it’s a distinct and repetitive thud, marked by a one-second delay between the launch and the impact. The F-16s swoop in like they are tearing open the sky, lock onto their target and with devastating precision destroy entire apartment blocks. Drones: in Gaza, they are called zananas, meaning a bee’s buzz. They are the incessant, irritating creatures. They are not always the harbingers of destruction; instead they remain omnipresent, like patrolling prison guards. Fajr rockets are absolutely terrifying because they sound like incoming rockets. You hear them rarely in Gaza City and thus we often confuse them for low-flying F-16s. It all creates a terrifying soundscape, and at night we lie in our beds hoping that the bombs do not drop on our houses, that glass does not shatter onto our children’s beds. Sometimes, we move from room to room in an attempt to feel some sense of safety. The reality is that there is no escape, neither inside the house nor from the confines of Gaza.

And this from Catherine Charrett in Gaza via Critical Legal Thinking:

A war on Gaza is com­plete with all of Israel’s latest tech­no­lo­gical killing inven­tions. “The drone” flies high in the sky, filling the airy space with a con­stant deep buzz­ing, which does not sub­side the entire night. His buddy, “the F-​16” flies lower down mak­ing a most ter­ri­fy­ing roar­ing sound which tears out the heart and car­ries it down the lane, and which is always fol­lowed by the sound of a bomb blast­ing. “The Bomb”, which crashes down, breaks the sky, rattles the win­dows, moves the chairs, pierces the ear, stops the heart and causes a deep feel­ing of sor­row and pro­found fear. The bomb that we know is always fol­lowed by death.

UPDATE: Rana Baker‘s recordings (for the Electronic Intifada) of the sound of Israeli attacks on Gaza can be heard here.