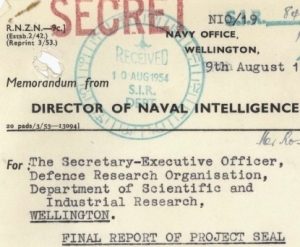 Among other things, I’m still collecting materials about the militarisation of nature (I’m not going to put it in scare-quotes, though it scares me — but we all know that Raymond Williams considered ‘nature’ to be perhaps the most complex word in the English language).  So I was interested to read about a secret US-New Zealand programme to develop a ‘tsunami bomb’ to be used against Japan during the Second World War (the official report talks of ‘an investigation into the potentialities of offensive inundation by waves generated by means of explosives’).

Under the codename Project Seal, the New Zealand Army, working in close cooperation with the Air Force, Navy and the US Navy, set off a series of underwater explosions that triggered tidal waves along the coast of New Caledonia and then the Whangaparaoa Peninsula near Auckland in New Zealand between June 1944 and January 1945.  Some 3,700 bombs (mainly TNT) were detonated during the experiments, and preliminary experimental results suggested that  a cascade of 10 large blasts (two thousand tons in total, 5 miles from the shore) would be sufficient to generate a 30–40 foot tsunami capable of inundating a small coastal city. 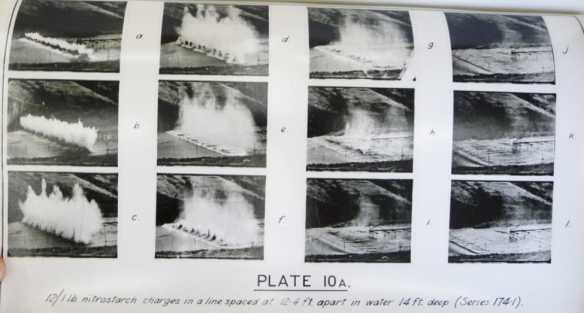 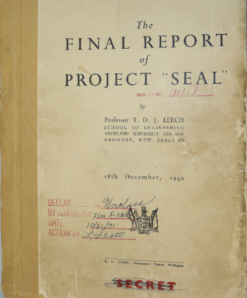 The project was directed by Professor Thomas Leech, Dean of Engineering at Auckland University, who was seconded to the military for the purpose of developing the bomb.  The final report was released in 1950, and the New Zealand Herald reported that its author’s work was considered sufficiently important for plans to be made for Leech to be sent to observe the US nuclear tests off Bikini Atoll in 1946 and to make direct comparisons between the two (the project was seen by some as a potential rival to the atomic bomb).

The report was declassified in 1999 and reported in New Zealand, but it was picked up by conspiracy theorists in the wake of the Indian Ocean tsunami in 2004 and the Japanese tsunami following the earthquake in 2011 (‘It is unprecedented in recorded history for two major tidal waves to occur less than seven years apart’; more here) and by news media in Britain and the US at the beginning of this year.  More here.

UPDATE: The United States continued to experiment with the possibilities of ‘explosion-generated waves’ in the 1960s, and the Office of Naval Research – which was busily sponsoring all sorts of research projects in spatial science at the same time – cooperated with the Scripps Institution of Oceanography, which initiated the compilation of this handbook-review and its presentation of a ‘procedure for wave predictions based upon the state-of-the-art in the field of explosion-generated waves’.  The review included experimental reports from high-explosive blasts at Mono Lake, field observations in Hawaii and elaborate mathematical modelling.

Interestingly, though, the language of the report – on those occasions when it turns to ‘operational considerations’ – is ostensibly defensive not offensive:

‘… any prediction method must consider each critical area of the coastline independently, and calculate enough different situations so as to be sure to bracket all critical conditions, before general statements can be made about susceptibility to wave attack from large explosions. Aside from the direct effects of run-up on the shore, large explosions can, under appropriate circumstances, produce very large waves in deep water, which may break upon the continental shelf many miles from shore. Since the wave spectrum for large explosions is peaked at wave periods substantially longer than the longest prevailing swell or surf, the net result is the creation of a breaker zone covering a very large area, and which can persist for several hours. Such waves could pose unusual and potentially severe problems to coastal navigation, not only through direct dynamic effects, but also because of cumulative effects such as inducement of resonant harbor oscillations and the scouring or deposition of sediment in regions ordinarily immune to normal storm conditions.’

Of course, the scenario can be reversed: if the US coast were potentially vulnerable to these effects (the threat of nuclear attack is the ever-present horizon of the report), so too were enemy coasts.  Unlike the earlier experiments, however, the danger now was less that of widespread coastal inundation and more of disruption to naval operations in the vicinity of the blast:

‘The first problem systematically attacked was that of coastal damage due to large explosion-generated waves, since, by analogy with the well-known phenomena of tsunami waves generated by earthquakes, it was initially hypothesized that the explosion of large atomic weapons at sea could result in considerable coastal damage by wave run-up and/or flooding. Later, as theoretical and experimental studies revealed the relatively inefficient wave making potential of large explosions, and that in many cases most wave energy is dissipated by breaking on the continental shelf before reaching shore, concern over run-up per se was replaced by the realization that other more serious wave problems exist. Accordingly, recent emphasis has been directed towards assessing the nature of the breaking wave regime offshore and its implications on the vulnerability of ships and undersea structures to breaking waves in relatively deep water (100 feet). These studies, in turn, have indicated more refined secondary problems. These include harbor oscillations induced by cumulative wave action offshore, and anomalous wave-induced clogging or erosion of harbor entrance channels by sediment transport.’

I suppose this may account for the interest in Hawaii, in which case Japan re-enters the scenario in spectral form, through the prospect of another Pearl Harbor…

3 thoughts on “Danger on the shore”