Most readers interested in the politics of humanitarianism and what Eyal Weizman calls ‘the humanitarian present‘ will know Lilie Chouliaraki‘s work, notably The spectatorship of Suffering (Sage, 2006).  She has a new book out now, The ironic spectator: solidarity in the age of post-humanitarianism 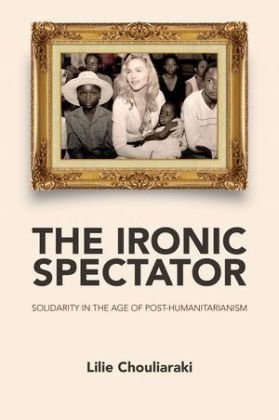 This path-breaking book explores how solidarity towards vulnerable others is performed  in our media environment. It argues that stories where famine is described through our own experience of dieting  or or where solidarity with Africa translates into wearing a cool armband tell us about much more than the cause that they attempt to communicate. They tell us something about the ways in which we imagine the world outside ourselves.

By showing historical change in Amnesty International and Oxfam appeals, in the Live Aid and Live 8 concerts, in the advocacy of Audrey Hepburn and Angelina Jolie as well as in earthquake news on the BBC,  this far-reaching book shows how solidarity has today come to be not about conviction but choice, not vision but lifestyle, not others but ourselves – turning us into the ironic spectators of other people’s suffering.

This intersects with my own interest in the modern and late modern spectatorship of war, though in complex and far from straightforward ways (I have particularly in mind the contemporary ‘consumption’ of war), so I was excited to read this description of Lilie’s current research:

My current work focuses on the mediation of war, where I explore the various public genres through which war has been mundanely communicated in our culture, from photojournalism to films and from memoirs to news. The aim is to better understand how our collective imagination of the battlefield and its sufferings, what we may call our ‘war imaginary’, has been shaping the moral tissue of public life, in the course of the past century (1914-2012).

As part of this project, she has an essay forthcoming in Visual communication later this year, ‘The humanity of war: iconic photojournalism, 1914-2012’, which will also appear in extended form in  Nick Couldry, Mirca Madianou and Amit Pinchevski (eds) The Ethics of Media (Palgrave, 2013).