I’ve been putting the finishing touches to the extended version of my essay on Tahrir Square and the Egyptian uprisings, which focuses on performance, performativity and space through an engagement with Judith Butler‘s ‘Bodies in alliance and the politics of the street’ essay/lecture (originally delivered in Venice in 2011).

Much of the existing discussion of Tahrir treats performance in conventional dramaturgical terms, and owes much more to Erving Goffman‘s classic work than to Judith’s recent contributions, so that spatiality is more or less reduced to a stage: see, for example, Charles Tripp, ‘Performing the public: theatres of power in the Middle East’, Constellations (2013) doi: 10.1111/cons.12030 (early view).  Others have preferred to  analyse the spatialities of Tahrir through the work of Henri Lefebvre: I’m thinking of Ahmed Kanna, ‘Urban praxis and the Arab Spring’, City 16 (3) (2012) 360-8; Hussam Hussein Salama, ‘Tahrir Square: a narrative of public space’, Archnet – IJAR 7 (1) (2013) 128-38;and even, en passant, W.J.T.Mitchell, ‘Image, space, revolution: the arts of occupation’, Critical Inquiry 39 (1) (2012) 8-32.

None of these seem to me to convey the way in which, as Judith has it, the presence of bodies in the square becomes the performance of a new spatiality through which people

‘seize upon an already established space permeated by existing power, seeking to sever the relation between the public space, the public square, and the existing regime. So the limits of the political are exposed, and the link between the theatre of legitimacy and public space is severed; that theatre is no longer unproblematically housed in public space, since public space now occurs in the midst of another action, one that displaces the power that claims legitimacy precisely by taking over the field of its effects…. In wresting that power, a new space is created, a new “between” of bodies, as it were, that lays claim to existing space through the action of a new alliance, and those bodies are seized and animated by those existing spaces in the very acts by which they reclaim and resignify their meanings.’

I see a similar conception at work in Adam Ramadan‘s emphasis on Tahrir as at once a space and an act – a space-in-process, if you like – of encampment: ‘From Tahrir to the world: the camp as a political public space’, European Urban and Regional Studies 20 (2013) 145-9.  I’m drawn to these formulations partly because they connect performance to the possibility of performativity through space-in-process, and partly because these ideas, attentive as they are to ‘space’, also pay close attention to ‘time’ (or rather space-time) (for a suggestive discussion of the temporalities of Tahrir, which I think have been marginalised in too many ‘spatialising’ discussions, see Hanan Sabea, ‘A “time out of time”‘, here.)

These comments are little more than place-holders, I realise, and I hope my reworked essay will clarify them; I’ll post the final version on the Downloads page as soon as it’s ready – in the next day or two, I hope. [UPDATE: The manuscript version, to appear in Middle East Critique, is now available under the DOWNLOADS tab: ‘Tahrir: politics, publics and performances of space’] 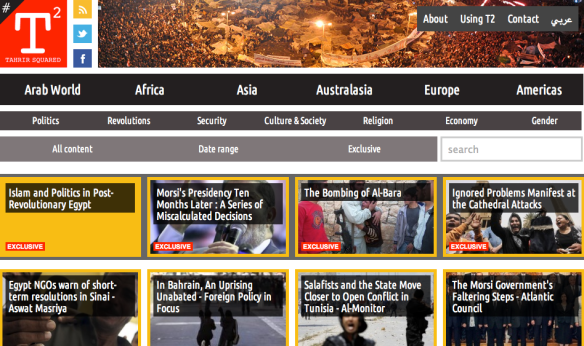 Part of my discussion addresses the imbrications of the digital and the physical, the virtual and the visceral.  For a quick overview, see Mohamed Elshahed here (from whom I’ve borrowed the wonderful image at the head of this post), but for a remarkable online platform that, amongst other things, seeks to ‘multiply the Tahir Effect around the globe’, capitalising on the transformations from the digital to the physical and back again, try Tahrir Squared:

‘T2 is a one-stop shop for reliable and enlightening information about the Arab uprisings, revolutions and their effects. It combines both original content by leading analysts, journalists and authoritative commentators, and curated content carefully selected from across the web to provide activists, researchers, observers and policy makers a catch-all source for the latest on the Arab revolutions and related issues through an interactive, virtual multimedia platform.

Unattached to governments or political entities, Tahrir Squared is concerned with ‘multiplying the Tahrir Effect around the globe’: an Effect which reawakened civic consciousness and awareness. An Effect which led to neighbourhood protection committees, and created those scenes in Tahrir of different religions, creeds and backgrounds engaging, assisting, and protecting one another.

That Effect still lives inside those who believe in the ongoing revolutions that called for ‘bread, freedom, social justice and human dignity’. This website is a part of that broader initiative, seeking to provide people with the knowledge and information to assist and stimulate that process of reawakening, through the provision of reliable news reports, thoughtful commentary, and useful analysis.‘