One of the very best blogs to be written out of Baghdad while the city was under US military occupation was Baghdad Burning.  Written by a young Iraqi woman who called herself “Riverbend“, it documented everyday life in a city being torn apart by military and paramilitary violence and provided a spirited series of commentaries on US and Iraqi politics.

In September 2007 Riverbend and her family finally left Baghdad: 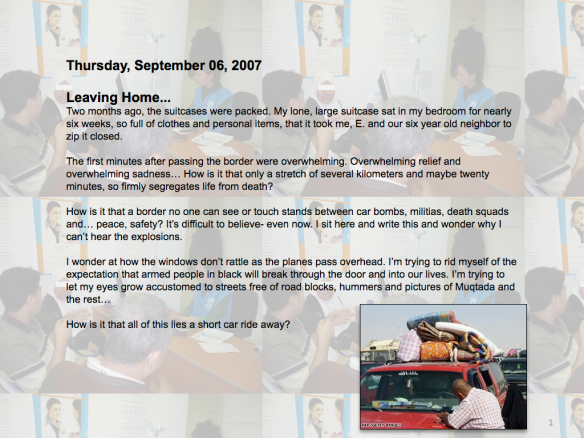 They crossed the border into Syria and took refuge in Damascus.  ‘Syria is a beautiful country,’ Riverbend wrote in her last post on 22 October 2007:

‘… at least I think it is. I say “I think” because while I perceive it to be beautiful, I sometimes wonder if I mistake safety, security and normalcy for ‘beauty’. In so many ways, Damascus is like Baghdad before the war – bustling streets, occasional traffic jams, markets seemingly always full of shoppers…’

And she described a newly strange sense of being at home:

‘Walking down the streets of Damascus, you can hear the Iraqi accent everywhere. There are areas like Geramana and Qudsiya that are packed full of Iraqi refugees. [You can find some extraordinary photographs by Gabriela Bulisova of Iraqi refugees in Damascus here and a revealing guide to being an Iraqi refugee in the city here].  Syrians are few and far between in these areas. Even the public schools in the areas are full of Iraqi children….

‘We live in an apartment building where two other Iraqis are renting. The people in the floor above us are a Christian family from northern Iraq who got chased out of their village by Peshmerga and the family on our floor is a Kurdish family who lost their home in Baghdad to militias and were waiting for immigration to Sweden or Switzerland or some such European refugee haven.

The first evening we arrived, exhausted, dragging suitcases behind us, morale a little bit bruised, the Kurdish family sent over their representative – a 9 year old boy missing two front teeth, holding a lopsided cake, “We’re Abu Mohammed’s house – across from you- mama says if you need anything, just ask – this is our number. Abu Dalia’s family live upstairs, this is their number. We’re all Iraqi too… Welcome to the building.”

I cried that night because for the first time in a long time, so far away from home, I felt the unity that had been stolen from us in 2003.’

The blog was transformed into two books, both published by the Feminist Press at CUNY with the same title, and inspired several stage plays and a BBC radio adaptation in 2007.

But on 9 April 2013, ten years since the fall of Baghdad to U.S. troops, Riverbend returned – to the blogosphere at least.  In her post, she lists the lessons of the war and the occupation, ‘probably’, she writes, ‘for the last time’:

‘We learned that while life is not fair, death is even less fair – it takes the good people. Even in death you can be unlucky. Lucky ones die a ‘normal’ death… A familiar death of cancer, or a heart-attack, or stroke. Unlucky ones have to be collected in bits and pieces. Their families trying to bury what can be salvaged and scraped off of streets that have seen so much blood, it is a wonder they are not red.

We learned that you can be floating on a sea of oil, but your people can be destitute. Your city can be an open sewer; your women and children can be eating out of trash dumps and begging for money in foreign lands.
We learned that justice does not prevail in this day and age. Innocent people are persecuted and executed daily. Some of them in courts, some of them in streets, and some of them in the private torture chambers.’

Riverbend hasn’t returned to Baghdad, where violence (which never went away) has intensified over the last six months and headlines – now tucked away on the inside pages of European and American newspapers – are once again recording ‘another day of slaughter‘.  You can find contrasting reports on conditions in Baghdad now here (“Everyone has his own map of familiar, reassuring, “stabilised” places, and other areas where they dare not return”), here (‘“Before we at least had the security to go anywhere,” Salbi said. “We go out like normal, but we don’t have the security of knowing we will come back. If someone is running even a half an hour late, you start worrying about bombs”‘), here (“… the sprawling, less well-to-do neighbourhoods, such as Ghazaliya, Dora and Saidiya still feel angry and tense. The concrete walls and armed checkpoints, put up during the American occupation at the height of the sectarian violence, remain in place. They still function to control the population, limiting access in some neighbourhoods to a couple of exits that can be easily sealed off”), and here (“Baghdad looked like a city scarred by death and despair. The sense of fear among ordinary Iraqis, exhausted and traumatized by the foreign occupation and years of fratricide, is overwhelming. Across the capital lie abandoned houses”).

Snapshots of a tangled mosaic.  You can find an overview, with graphs and maps, here and a backgrounder to that article here.  Below I’ve reproduced a map from the Institute for the Study of War; despite the military language (SIGACTS are ‘significant acts’), the map was compiled by ISW ‘from available open-source news reporting from Iraqi and western media. Where possible, the attacks were cross-referenced with other sources.’ In consequence the map does ‘not provide an exhaustive account of security incidents in Iraq during the period in question’ but indicates ‘concentrations of violence.’  But the continuity of military language – and military cartographic conventions which I discussed in “Seeing Red” (DOWNLOADS tab) – is about more than the neo-conservative ideology of the ISW: it also speaks to the resurgence of violence noted in many of those recent press reports: 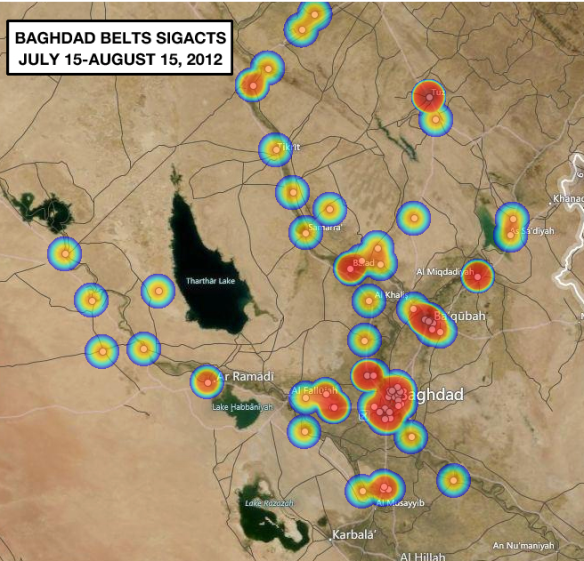 Casualty figures in Iraq are now at their highest level since June 2008.  Iraq Body Count is still maintaining its grim but necessary tabulations – though some critics insist that these gravely underestimate the true figures – and in its most recent report notes:

The US/UK-led invasion of March 2003 has brought a decade of high and low intensity armed conflict to Iraq. But this conflict is not yet history. It remains entrenched and pervasive, with a clear beginning but no foreseeable end, and very much a part of the present in Iraq. In major regions of the country armed violence continues to exact a remorseless toll on human life, young and old, male and female, across society.

The US/UK-led invasion of March 2003 has brought a decade of high and low intensity armed conflict to Iraq. But this conflict is not yet history. It remains entrenched and pervasive, with a clear beginning but no foreseeable end, and very much a part of the present in Iraq. In major regions of the country armed violence continues to exact a remorseless toll on human life, young and old, male and female, across society.

Riverbend is no longer in Damascus either, where violence has also intensified during the civil war, especially since last spring (see this sequence of maps compiled by the New York Times here): 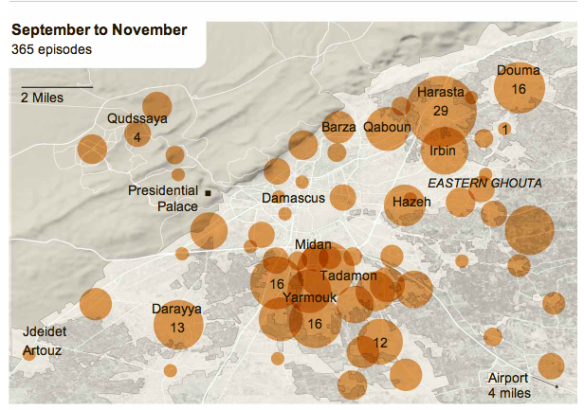 Many Iraqis have been forced out of Damascus by the fighting and returned to Baghdad, shaken by the reappearance of sectarian violence, but Riverbend explains:

‘I moved before the heavy fighting, before it got ugly. That’s how fortunate I was. I moved to another country nearby, stayed almost a year, and then made another move to a third Arab country with the hope that, this time, it’ll stick until… Until when? Even the pessimists aren’t sure anymore. When will things improve? When will be able to live normally? How long will it take?’

I hope she isn’t in Cairo.

1 thought on “Baghdad is still burning”