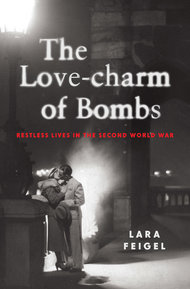 I’ve noted Lara Feigel‘s wonderful The love-charm of bombs before, and now there’s a short interview with her at the New York Times Arts blog here:

I was originally planning to write an academic study of war literature. But I kept finding that I was reading about the writers’ lives, rather than reading about their books, and especially about their passionate wartime love affairs. Once I had spent time in their archives and read their wartime letters and diaries, I started to think that it’s impossible fully to understand classic novels like Graham Greene’s “The End of the Affair” or Bowen’s “The Heat of the Day” without knowing about their lives, and seeing these books as urgent messages, written to lovers, and written out of an extraordinary time. A lot of parallels and shared experiences were emerging in the research, so it seemed obvious to tell the stories simultaneously, threading them together as in a novel.

Lara explains that, although she was trained as a literary critic and historian,

I enjoyed the challenge of acquiring new kinds of knowledge in researching this book. I read a few military accounts of the war, but I learned a lot of the war news from reading contemporary diaries and newspapers. I wanted only to convey as much as well-informed people knew at the time. After all, my writers weren’t military experts, just people who found themselves living through a complicated and long-drawn-out war.

I know just what she means (and for more on another project in which Lara crosses established boundaries, see this meeting of minds between neuroscientists, artists, philosophers and analysts, which she co-organized with Lisa Apignanesi).  In a similar sort of way I’m a geographer ‘by training’, whatever that might mean, but I’m content with the description largely because it gives me the freedom to pursue ideas and issues wherever they take me, often far beyond the bounds of any recognisable or at any rate nominal ‘geography’ – except that I always remember Dick Chorley‘s frequently repeated injunction when I was an undergraduate at Cambridge: “To ask, ‘Is that Geography?’ is the most un-geographical of questions.”  So I think geography is a discipline in the Foucauldian sense – it works to produce disciplinary subjects through a network of formal institutions (including university departments) and journals, through a canon of texts, and through a systematic series of examinations – but that’s about it.  I don’t think this makes Geography any different from a host of other ‘disciplines’, needless to say: it’s a route of entry into a rich and constantly changing intellectual-practical world, and unlike Richard Hartshorne and others of his ilk I insist that there’s a lot to be said for deviating from the path (or rather Path) and acquiring those ‘new kinds of knowledge’ that Lara talks about.

With that sort of license comes responsibility, too, of course, but that doesn’t mean conformity.  I’ve always liked E.P. Thompson‘s image of himself, working for the first time on early eighteenth- rather than ninteenth-century Britain in Whigs and Hunters – his best book – as a parachutist landing in occupied territory (occupied not least by Jack Plumb), burying his silk under a tree and night after night moving stealthily through the surrounding landscape, gradually coming to know it better and better: but on his own terms.  Perhaps he was channelling his late brother Frank who parachuted into Bulgaria during the Second World War to provide support to the partisans and who was summarily executed for his pains.

Which brings me back to Lara.  Asked to recommend a book about literature during the Second World War, she suggests Adam Piette‘s Imagination at war: British fiction and poetry 1939-1945 (1995): ‘a wonderful account of the oddness of the literary responses to the Second World War.’  D.J. Taylor wasn’t so sure, though I found Adam’s discussion of the war in the desert very helpful in enlarging my own view of those campaigns for ‘The natures of war’.

I know the sequel better, The Literary Cold War, 1945 to Vietnam (2009), which includes an invigorating discussion of Graham Greene‘s The Quiet American amongst many other good things (a novel much on my mind of late).  Adam runs the Cultures of the Cold War network whose website opens with a rapid-fire quotation from E.L. Doctorow:  ‘The bomb first was our weapon. Then it became our diplomacy. Next it became our economy. Now it’s become our culture. We’ve become the people of the bomb.’ Unfortunately, it appears the website then ran out of energy (sic), though there’s a useful Bibliography.

For me, the book I most admire is Patrick Deer‘s Culture in Camouflage: war, empire and modern British literature (2009).  He paints on a larger canvas than Imagination at war – the book covers the period 1914-1945, and there are definite advantages in doing so – and he seems to have read everything and to have thought about it all in depth and detail.  I was first drawn to it by his chapters on the Second World War, but as I re-work “Gabriel’s Map” for what I think, hope and pray will be a second new book (really), provisionally called War material, I’ve plunged back into his earlier accounts of the First World War.  They are brimful of incisive readings and artful insights.

“Gabriel’s Map” is all about the dialectic between the scopic regime constructed through the topographic map, the aerial photograph and the field sketch on the Western Front (‘cartography’) and the sensuous, haptic and thoroughly embodied knowledge of the troops on – and in – the ground (‘corpography’).  Here’s Patrick:  ‘If the emblematic figure for the collapse of vision was No Man’s Land, it was the strategist’s map that came to represent the struggle to recapture oversight, to survey and order the mud, chaos and horror of battle.’ So I’m now thinking much more about the very idea of No Man’s Land and the multiple ways in which soldiers apprehended its gouged terrain.

More on all that very soon, but here I just want to say that Culture in camouflage is gloriously intellectually promiscuous and also a rattling good read.  If you want to explore the idea of ‘war culture’ I’d recommend starting here, and returning to it again and again.  But pack Lara’s book for the journey because she also has much to show us not only about how to travel but also how to write.