I’ve posted about this remarkable project before.  The Air Force Research Institute has now made available online its historical database of air strikes.  Although a USAF project, the Theater History of Operations Reports is not confined to US airstrikes but includes allied strikes; the main focus is on World War I (from June 1916), World War II and Vietnam (from 1965-1969, though I haven’t yet checked whether this includes Laos and Cambodia).

The original description of the Project included the Korean War, Desert Storm (1991), Allied Force (1999), Afghanistan (2001 on) and Iraq (2003-11), but these are still classified and not yet available online.  Here is the architect of the project, Lt Col Jenns Roberston, explaining the background:

That was a year ago.  There’s now a Quick Start Guide here, and you can download the full, unclassified database and also ‘Grab and Go’ files for Google Earth.  Latest background information here.

Here’s a grab of Allied bombing in Europe and the Mediterranean during World War II, though the key here is obviously to disaggregate and refine the data – which is precisely what the database allows.  The red squares on the map are B-17 strikes but these overlay (for example) the orange squares of Wellington bombers so the impression at this scale is not particularly helpful. 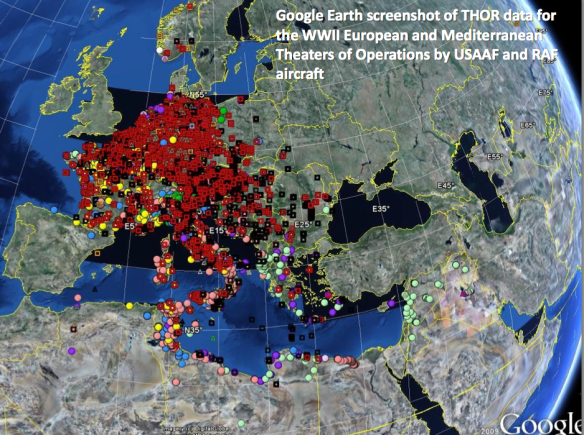 And while we’re on the subject of World War II, don’t forget the Bomb Sight project, which maps the London Blitz in extraordinary detail: more here.

It’s important to look beyond Europe, of course.  Roberston, who started work on the database in 2006, told the Air Force Times that he was surprised at the level of Allied bombing in the Pacific theater:

“We were blown away – no pun intended – by the level of bombing that was taking place, not only in the South Pacific  but also in Burma, which is something that nobody looks at; Formosa, currently known as Taiwan; and the Philippines – how heavily those regions were bombed in the lead-up to bombing Japan proper.”

If anyone else is working through the disaggregated database too, do let me know how you get on.