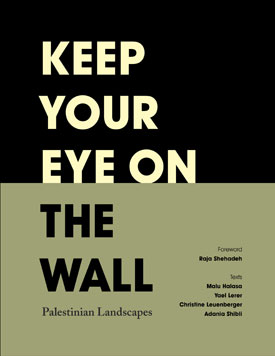 There’s a fine series of reflections by Andrew Ryder at Warscapes on a new book of photographs and essays on the Wall that Israel has built deep inside the occupied West Bank, Keep your eye on the Wall: Palestinian landscapes.  As Andrew notes,

‘The wall is a nuisance and eyesore; it is a scar in the natural landscape and the social body. It is congealed theft, and an act of violence.’

Eyal Weizman‘s Hollow Land tells us much about the way in which Israel’s neo-colonial project is inscribed through a series of visual practices – a scopic regime of extraordinary, ever-present and brooding violence – but Andrew’s commentary reminds us of another, no less artful politics of looking.  He engages in a wonderfully suggestive, deeply critical way with the aesthetics of dispossession and oppression:

While I found many of the photos in this book upsetting, I think that a traditionally aesthetic standpoint toward the wall, a disinterested interest, is particularly horrifying because it occludes something that was always obvious to me every time I looked at the wall, which was its manifest injustice.

Throughout the book, there are moments that the wall appears too static, imposing and impermeable. I found a lack of witness to the gaps and even the fragility of the structure. There seems little evidence of soldiers, checkpoints, settlements, refugee camps or the other evidence of dynamism or vulnerability in the territorial apparatus that the Israeli state has constructed.

The gaps I understand, but fragility?  vulnerability?  If only.  As Shakespeare put in in A Midsummer Night’s Dream,

O wicked Wall through whom I see no bliss!
Cursed be thy stones for thus deceiving me!

Others have travelled this route before, of course: I’ve already noted other critical reflections on the political and ethical snares set by any attempt to photograph the monstrosity.  And yet the collection that Andrew discusses is well-titled.  As Edward Said reminded his readers:

For a different take on the political aesthetics of the occupied landscape – though not on the Wall – see Daniel Bertrand Monk’s An aesthetic occupation: the immediacy of architecture and the Palestine conflict (2002).