Until now, my knowledge of the French experience on the Western Front has been largely confined to Henri Barbusse’s Under Fire.  I was particularly taken by his striking evocation of the materiality of war – of the ‘slimescape’ – which features in ‘Gabriel’s Map’ and ‘The Natures of War’ (both soon to be available in written form):

The earth! It is a vast and water-logged desert that begins to take shape under the long-drawn desolation of daybreak. There are pools and gullies where the bitter breath of earliest morning nips the water and sets it a-shiver; tracks traced by the troops and the convoys of the night in these barren fields, the lines of ruts that glisten in the weak light like steel rails, mud-masses with broken stakes protruding from them, ruined trestles, and bushes of wire in tangled coils. With its slime-beds and puddles, the plain might be an endless gray sheet that floats on the sea and has here and there gone under. Though no rain is falling, all is drenched, oozing, washed out and drowned, and even the wan light seems to flow. Now you can make out a network of long ditches where the lave of the night still lingers. It is the trench. It is carpeted at bottom with a layer of slime that liberates the foot at each step with a sticky sound; and by each dug-out it smells of the night’s excretions. The holes themselves, as you stoop to peer in, are foul of breath. I see shadows coming from these sidelong pits and moving about, huge and misshapen lumps, bear-like, that flounder and growl. They are “us.”

We begin to flow again in one direction. No doubt it is a movement planned up there, back yonder, by the chiefs. We trample soft bodies underfoot, some of which are moving and slowly altering their position; rivulets and cries come from them. Like posts and heaps of rubbish, corpses are piled anyhow on the wounded, and press them down, suffocate them, strangle them. So that I can get by, I must push at a slaughtered trunk of which the neck is a spring of gurgling blood.

The ground is so full of dead that the earth-falls uncover places that bristle with feet, with half-clothed skeletons, and with ossuaries of skulls placed side by side on the steep slope like porcelain globe-jars. In the ground here there are several strata of dead and in many places the delving of the shells has brought out the oldest and set them out in display on the top of the new ones. The bottom of the ravine is completely carpeted with debris of weapons, clothing, and implements. One tramples shell fragments, old iron, loaves and even biscuits that have fallen from knapsacks and are not yet dissolved by the rain. Mess-tins, pots of jam, and helmets are pierced and riddled by bullets—the scrapings and scum of a hell-broth; and the dislocated posts that survive are stippled with holes.

It’s a clunky old translation, but the power of Barbusse’s prose still shines through.  Small wonder that he later confided: ‘I once used to think that the worst hell in war was the flame of shells; and then for long I thought it was the suffocation of the caverns which eternally confine us. But it is neither of these. Hell is water.’ (If you want more on these imaginative geographies, incidentally, I recommend Susan Grayzel‘s short essay on Barbusse and, more generally, Claire Keith‘s ‘Pilgrims in a toxic land: Writing the Trenches of the French Great War’ in Jeff Persels‘s collection, The environment in French and Francophone Literature and Film (2013) pp. 69-85). 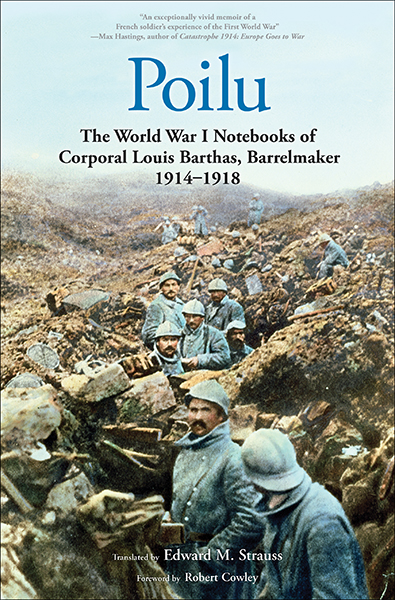 I’ve spent the last several days reading two other accounts by French authors.  The first, Louis Barthas‘s Poilu, has only recently been made available in English translation (it was first published in France in 1978).  ‘Poilu’ means ‘hairy one’, but probably the closest English-language equivalent is the much more recent ‘grunt’, for Poilu presents  the view of the (not so) common soldier.  It’s a carefully assembled account, as Robert Cowley explains in his helpful introduction:

‘Few documents from the Great War are as remarkable as the war notebooks of Louis Barthas, published in English for the first time in Edward M. Strauss’s fine translation. They are special for a number of reasons. Their author left a record of four years of service at the front, an unusual span of survival. He was not an officer but a common soldier, a corporal, a man approaching middle age who in civilian life had been a barrelmaker from the Languedoc region of France, a wine-growing center…. After he was mustered out in February 1919, Barthas began to assemble a narrativeRead more at describing his time on the Western Front that would eventually run to nineteen notebooks. He would work on it after he finished a long day of barrel-making, fleshing out the original diaries with quotes from letters home, official reports and orders that he had kept, and accounts by fellow soldiers that he had written down at the time, as well as with ephemera such as postcards and newspaper clippings. Those sources he put together in the book you read here, one that is part diary, part memoir.’

It’s been praised to the skies – see, for example, this review in the New York Times and this review at the Daily Beast – and Barthas’s spirited socialism and pacifism make it all the more interesting.  But, for me at least, it doesn’t capture the slimescape with the same intensity as my second book: Gabriel Chevallier‘s Fear.

I confess to being taken aback by its very existence.  In another life – in grammar school – my French teacher, a wonderful man called Robert Bratcher, recommended Chevallier’s Clochemerle as a way, I now suspect, of teaching us what ‘Rabelaisian’ meant without actually having to read Rabelais.  It’s a brilliantly comic novel (or at least it seemed so to this fifteen year-old), shot through with word play, artful phrases and visually, almost viscerally immediate staging in which the body – and the fear of/fascination with  its functions – loomed large.

It turns out that the same sensibilities run through Fear, which is a novelisation grounded in Chavellier’s own experiences. Malcolms Imrie‘s fine translation was made available in the UK in 2012, but the New York Times is now publishing a US edition.  ‘At times,’ Neil Fitzgerald wrote in the TLS (in a review tellingly entitled ‘When the body takes charge’),

reading Fear feels like being led through the damnation panel of Bosch’s “The Garden of Earthly Delights”, the front line “blazing like some infernal factory where monstrous crucibles melted human flesh into a bloody lava”. There are wince-inducing close-ups of mutilated men and corpses. Chevallier’s turn of phrase, brilliantly rendered in Malcolm Imrie’s translation, makes this distant war feel horrifying and close. Dartemont’s ultimate triumph, beside surviving, is in never having allowed himself to become dehumanized.

It turns out that others were also taken aback by its very existence.  Fear was originally published in 1930, as Tobias Grey explains, and the French officer class rose up against Chevallier’s merciless assault (which you can also find in Barthas):

Subsequent criticism of “Fear” meant that it was withdrawn from circulation in France on the eve of World War II and did not reappear until 1951. Chevallier, who had scored a big hit with his satirical novel “Clochemerle” (1934) in the meantime, declined to kick up a fuss. “Once war has come, the time has passed for warning that it is a disastrous venture with unforeseeable consequences,” Chevallier reasoned in the preface of “Fear.” “That is something that must be understood earlier, and acted on accordingly.” When “Fear” was recently re-published in France after many years out of print, one critic still felt it necessary to point out that pages like the ones he had just read “would have had the author shot during the war.”

As I’ve indicated, central to Chevallier’s account is the human body and the hapticity of war: its sensual, physical apprehension and its corporeal inscription.  Grey concludes:

… above all “Fear” is a novel whose most indelible passages describe the sensory degradation of war on the human body. These baroque descriptions are generously translated into English by Malcolm Imrie without a hint of stiltedness [in fact, Imrie won the Scott Moncrieff Prize for his translation]. A face is described as seeming to “acquire a dull, gray coating, as if someone had forgotten to dust it, and the beard, drawing strength from the compost of unhealthy flesh, spread rapidly, seeming to drive out life, like ivy takes light from the front of a house.” It is the kind of powerful prose that helps to make Chevallier’s long-neglected novel one of the most effective indictments of war ever written.

All of this reading is in part preparation for a trip later this month with an old friend to the battlefields of the Western Front (we’re still arguing over which of us is Blackadder and which is Baldrick, but it’s really no contest): watch this space for a report.

1 thought on “In the literary trenches”