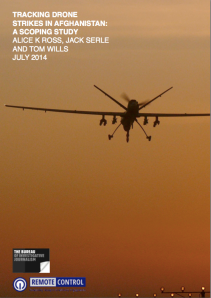 The marvellous Bureau of Investigative Journalism has just published a preliminary report on its new study  of drone strikes in Afghanistan, ‘the most heavily drone-bombed country in the world.’  The study, carried out with the support of the Remote Control Project, has been prompted by analyses which show that ISAF has persistently under-estimated civilian casualties from its strikes (‘“We only count that which we see… You can do a tremendous amount of forensics … [but] seldom do we see the actual bodies.”)

I have my doubts about the wisdom of severing ‘drone strikes’ from air strikes carried out by conventional aircraft that are networked in to ISR feeds from drones; I’ve elaborated this before, and it is a crucial part of my own work on militarised vision, where I’m working through the military investigations into air strikes in Kunduz, Sangin and Uruzgan.  I’ll start posting about this work next month.

The irony, I think, is not (quite) that we know so little about the ostensibly ‘public’ strikes in Afghanistan compared with the ‘covert’ campaigns in Pakistan, Yemen, Somalia and elsewhere: it is, rather, that we know a lot about how the USAF (though not the RAF) conducts strikes in Afghanistan but remarkably little about the victims, whereas in Pakistan we know much less about how the strikes are carried out (apart from the bureaucratisation of ‘kill lists’ in Washington) and, thanks to the work of the Bureau, much more about the victims.

It is true, though, that while the official US military investigations released through FOIA requests are often immensely informative, even in redacted form (more on this next month), there is often also a remarkable reluctance to release even basic information to the public.  Spot the difference between these two tables; the first release (on top) was subsequently overwritten by the second (below)… 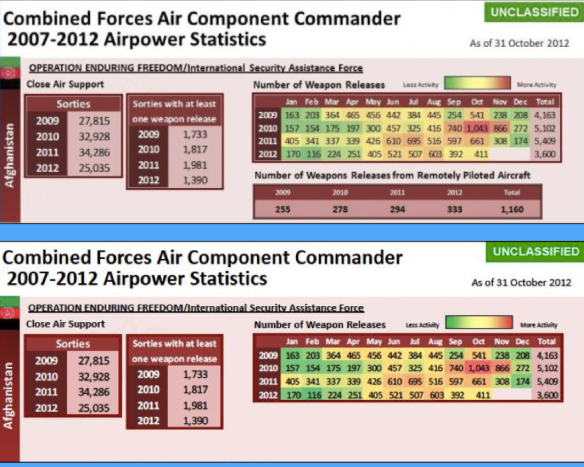 As I say, more to come.  In the meantime, the ‘scoping study ‘ from the Bureau is here, and well worth reading.