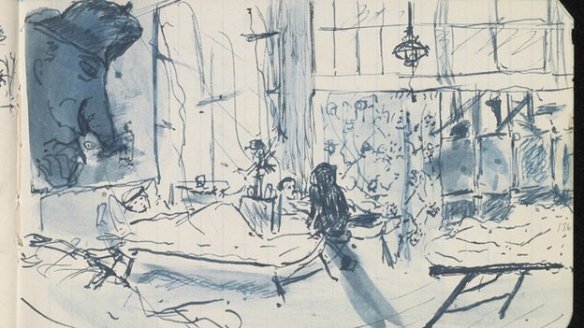 The BBC reports that Siegfried Sassoon‘s diaries from the First World War have been digitised by Cambridge University Library and are now available online (more illustrated reports here and here).  The journals and two notebooks of poetry include not only Sassoon’s jottings but also sketches like the interior of a military hospital (above).

Unlike edited printed transcriptions, the digitisations allow the viewer to form a thorough sense of the nature of the physical documents. Sassoon wrote in a small but neat and legible hand, frequently using the notebooks from both ends. His war journals were used for a wide variety of purposes: in addition to making diary entries Sassoon drafted poetry, made pencil or ink sketches, listed of members of his battalion and their fates, made notes on military briefings and diagrams of trenches, listed locations and dates of times spent at or near the Front, noted quotations, and transcribed letters. The wartime notebooks were small enough to have been carried by Sassoon in the pocket of his Army tunic, and many had enclosures such as letters tucked into the outer cover or inner pouches; some bear tangible evidence of use in the trenches, from the mud on notebook MS Add.9852/1/7 to the candlewax spilled on MS Add.9852/1/9, presumably as Sassoon sat writing in his dug-out by candlelight.

I read Sassoon’s (fictionalised) Memoirs of an infantry officer several times, for ‘Gabriel’s Map’ and ‘The natures of war’, and again more recently for my new project on the casualties of war,  and didn’t find it a patch on, say, Edmund Blunden‘s Undertones of war.  But I’m looking forward to working my way through the notebooks because it’s already clear to me that there’s an immediacy and rawness to the writing that Memoirs often, understandably, seemed to lack:

‘July 1st 1916…  Since 6.30 there has been hell let loose.  The air vibrates with the incessant din.  The whole earth shakes and rocks and throbs.  It is one continuous roar.  Machine guns tap and rattle, bullets whistling over head – small fry quite outdone by the gangs of hooligan-shells that dash over to [illegible] the German lines with their demolition parties…. One can’t look out as the m[achine] g[un] bullets are skimming.  Inferno – inferno – bang – smash!!’