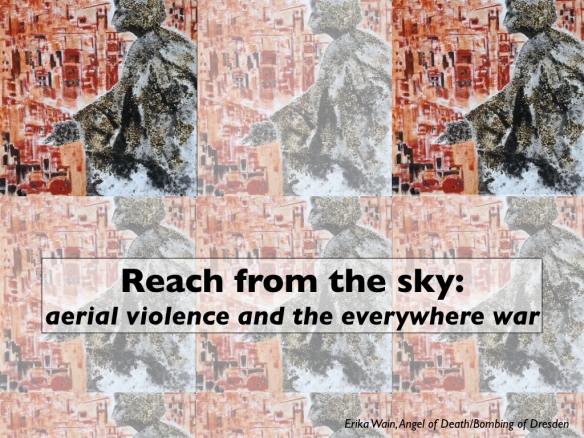 I now have more details to share about my Tanner Lectures in Cambridge next month, Reach from the sky: aerial violence and the everywhere war.

First, here is a preliminary summary (not an easy thing to provide, since the two presentations are still very much in formation: but it will give you a rough idea of what I want to address).

Bombing is back in the headlines – but then it never really left. Over the last hundred years, bombing has become the preferred military option for many states, but it has supposedly been radically transformed over the last decade or so by the introduction of unmanned aerial vehicles (‘drones’). Their use has sparked a vigorous debate, inside and outside military circles, but commentators have rarely situated Predators, Reapers and other drones within the longer history of aerial violence or the larger matrix of armed conflict within which they have been deployed.

These lectures seek to fill both those gaps by addressing two fundamental questions. The first lecture, Good bomb, bad bomb, asks how people – both those who carry out air strikes and those publics who endorse them – have been persuaded of the propriety of aerial violence. Four responses run like red threads throughout the long history of bombing from the air: bombing saves lives, especially when compared with ‘boots on the ground’; bombing is bold, brave and ‘separates the men from the boys’; bombing is scientific, objective and precise, organised through an extended ‘kill-chain’ that ensures efficiency and disperses responsibility; and bombing is ‘law-full’, not only legal but also a means of imposing law on those who lack its ordering. These claims only apply to our bombs of course, not theirs, and these arguments and the practices that lie behind them have been substantially re-worked by today’s drone wars.

The second lecture, Killing space, asks what spaces have been produced through the changing ‘destruction line’ that has animated military targeting and military violence. Here there are two issues of crucial importance. One concerns the locus of targeting: in particular the range of aerial violence, the emergence of ‘wars without fronts’ and the extension of military violence beyond any demarcated battlefield, and the subsequent ‘individuation of warfare’ in which targets have contracted from areas and boxes to groups and individuals even as they have expanded through their location within networks that transmit and amplify the effects of individual strikes. The other concerns the grammar of targeting: in particular the reification and abstraction of targets, the rise of dynamic targeting and the incorporation of real-time intelligence, surveillance and reconnaissance, and the increased reliance on digital signatures for the cultivation of the killing fields.

Answers to these questions have much to tell us about the changing contours of modern war and the adjudication of what is to count as a ‘grievable life’ in the twenty-first century.

The lectures draw on a series of presentations, essays (most of them available under the DOWNLOADS tab) and posts, but they will also break new ground – and lots of it.  I’ll be going back to the origins of bombing before the First World War, tracing some of the parallels between bombing on the Western Front and the late modern deployment of Predators and Reapers, tracking the development of drones since the Second World War, and coming right up to the multiple forms of aerial violence currently being visited on Afghanistan, Iraq, Syria and elsewhere.  The lectures will also be packed with images (and even poetry).

The format: I’ll give two 50-minute presentations starting at 5 p.m. on Wednesday 13 January, separated by a refreshment break (!) and followed by a reception.  Then at 5 p.m. on Thursday 14 January a panel of four respondents – which will include Chris Woods, (author of Sudden Justice: America’s secret drone wars), Grégoire Chamayou (author of A theory of the drone/Drone theory) and Jochen von Bernstorff, (Professor of Constitutional Law, Public International Law and Human Rights in Tübingen) will provide their reactions and comments, to be followed by a general discussion and debate.

The place: The lectures are organised by Clare Hall but will be given at the Robinson College Auditorium.  Admission is free but you will need a ticket from:

I’m told that the tickets are going fast (really).  I’ll post updates on my progress; after the event I’ll post the presentation slides, and there will also be a published version at a later date.

2 thoughts on “Reach from the Sky”