Virtually a month since my last post, the longest silence since I started: my dad died last month, and I’m only just back from the UK and still stumbling around trying to find words.  He left school at 14, like my mum; they met while she was working in a baker’s shop in Sidcup High Street and he parked his milk cart outside to buy some buns.  They married soon after the war ended and he had completed his national service with the Royal Artillery in India.  The post-war Britain in which I grew up was still indelibly marked by the war – from bomb-sites to prefabs, popular culture to kids’ comics. When I was a kid my dad worked as a van driver for the Ministry of Works, and one day he took me to one of the vast warehouses where the Imperial War Museum kept stuff for which it either didn’t have room or didn’t know what to do with; much of it still very recent.  It was a wonderland for a young boy to race around – and climb over – but back then I was oblivious to the possibility that these mute objects could be made to speak.

Dad never talked about his war, and it would be years before my thoughts turned back to war again. I heard that he had taken a turn for the worse while I was working in the research room at the IWM, reading diaries and letters from men and women who had been involved, in one capacity or another, in casualty evacuation during the First and Second World Wars.  In amongst the horror – of which there was no shortage – there was also extraordinary courage and bravery, black humour and beautiful images, and for some consolation and even redemption.

But this isn’t a prelude to talking about my dad ‘fighting a battle’ in his last months; those martial metaphors are utterly misplaced, particularly for such a gentle man.  To be sure, there was bravery and defiance – Dad insisted that all he wanted to do was leave hospital and go home to look after Mum – and there was beauty too: him and Mum holding hands across his bed, telling one another over and over again how much they loved one another.  And yet the experience – death, I insist, not a ‘passing’ –  is like war in at least one sense:  you think you’re prepared for it, but you never are and so you muddle through as best you can, helped immeasurably by the company of others.  All sorts of things suddenly leave you bereft; some you anticipate, others you don’t. When we arrived at the crematorium, my mum sitting between my brother and me, the hearse was at the foot of the long drive, idling by the side of the road – and I can’t get the sense of Dad quietly waiting for us out of my mind. 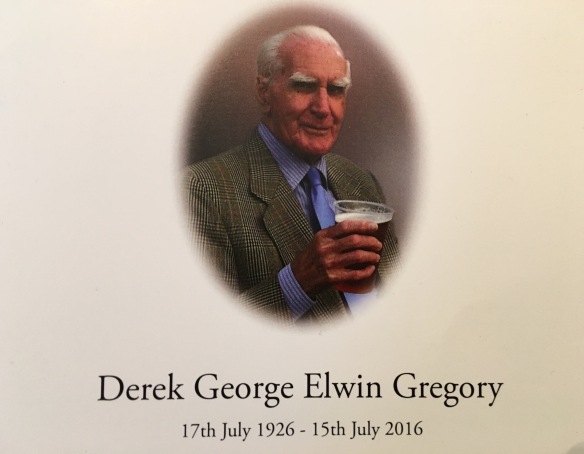 He died just two days before his ninetieth birthday, and I’ve been re-reading Elizabeth Barrett Browning’s To my father on his birthday, which was written in 1826, exactly one hundred years before Dad was born:

‘There glides no day of gentle bliss

More soothing to the heart than this!

Repeating to the listening ear

The names that made our childhood dear

Will leave her dulcet voice behind

To tell, amidst the magic air

How oft she smiled and lingered there.’

He was always there for all of us, quietly, unobtrusively there; he was a lovely, loving and much loved man, and I can’t imagine him not being there still.

6 thoughts on “The Long Silence”