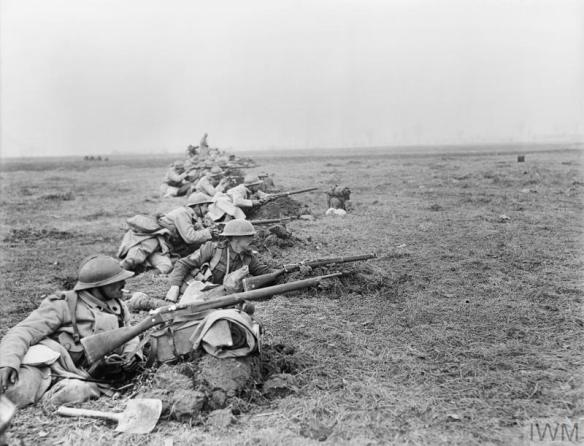 News from the brilliant Nisha Shah that her paper, ‘Gunning for war: infantry rifles and the calibration of lethal force’, is just out in a themed issue of Critical Studies on Security [(5 ( 2017] on ‘Becoming Weapon’:

Infantry rifles are responsible for the majority of war-related deaths. This paper describes how and why they became ‘standard-issue’ military equipment. Examining testing reports, field surgery observations and bullet specifications, I develop a theory of instrumentality through which a specific way of killing in war- fare becomes legitimate and manifest in infantry rifles. Rather than pre-given objects that are made acceptable through an evaluation of their uses and consequences, I show that weapons become possible through an ontology that calibrates how killing in war occurs, technologically and ethically. More generally, this paper expands the study of weaponry and war by uncovering the material and moral specifications that not only design but also crucially define what counts as a weapon. Clearly stated are when and against whom the line between life and death can be drawn. This paper, by contrast, uncovers the conditions that generate how and with what that line can be legitimately crossed.

No human artefact is intrinsically a weapon, be it a sword, an explosive or a chemical agent. Conversely, a passenger airplane, a shard of broken glass or a trained dog can perfectly well serve as a vector of bodily harm or lethality. An arrangement of things becomes a weapon through relational changes in intensity and context such that its motive force, density, potential energy or mechanical capability comes to make events of death and dismemberment. And beyond the immediate occasion of a weapon’s terrible work lies a wider network of relations that condition its emergence and support its operation. Systematically pursued, the tracing of such a network will draw out dependencies that extend far beyond the immediate requirements of its material production or the political economy of its acquisition and circulation, revealing the long tail of weaponisation that runs through our contemporary societies…

By placing particular emphasis on the making or becoming of weapons, we can begin to displace the fascination with the technical performance of destruction and instead query how weapons come to destroy in the first place. In so doing, we hope to break the deadlock between techno-fetishism and normative-polemical rejections of weapons, which together function as obstacles to a greater understanding of the significance of weapons in the making of worlds of violence and war.

It’s an excellent issue, including a paper from the equally wonderful Kate Hall (Kindervater).  Here are those other contributions:

Weapons, desire, and the making of war: Benjamin Meiches

The technological rationality of the drone strike: Katharine Hall Kindervater

War machines par excellence: the discrepancy between threat and control in the weaponisation of infectious agents:  Gitte du Plessis

Lethal visions: the eye as function of the weapon: Antoine Bousquet