A note from Ian Alan Paul – I’ve noticed his Guantanamo Bay Museum before, but he’s produced a host of other interesting projects too – brings the welcome news of his experimental video The Dis/Appeared: 25 Notes on Colonial Regimes of Perception:

“The Dis/Appeared” (2018) is an experimental video essay that examines the totalizing imposition of colonial perception in contemporary Palestine. The project theorizes the Israeli state’s establishment of perceptual regimes that confine the colonized to the liminal thresholds of view, never allowing Palestinians to entirely appear or disappear but instead perpetually rendering them dis/appeared. Through narration and a montage of images that are at once ordinary and unsettling, the video essay gives an account of settler-colonial instantiations of power while also proposing a tactical repertoire to be taken up against colonial rule. The project was produced over the course of 2017 while the artist was living and teaching in the West Bank of Palestine, and is the first part of a series of films, installations, and texts that examine the conjuncture of coloniality, governmentality, and memory in global contexts.

You can view it here (33 minutes) and download the script here. 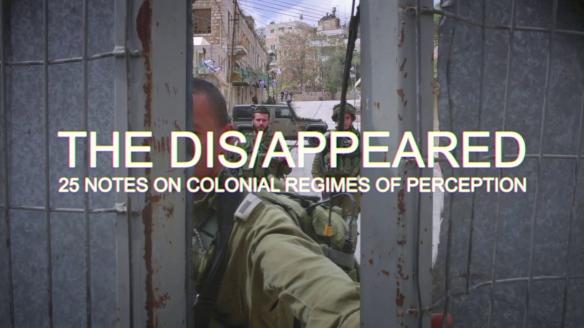 A sample that really doesn’t do justice to the project and its artful exploration of colonial visuality:

Never entirely in or out of view but perpetually detained in the spectral thresholds between the two, Palestinians are made to be both apparent and transparent, signal and noise, conspicuous and concealed, evident and obscure, appeared and disappeared. Because Palestinians cannot decidedly and finally appear within view, Palestine can be perceived as a pristine landscape, a blank slate, an untouched surface, entirely vacant of Palestinians and inviting of ever-expanding Israeli settlements and colonization. Because Palestinians cannot decidedly and finally disappear from view, they remain perpetually available for increasing intensities of Israeli oversight, management, surveillance, policing, and control. If Palestinians manage to escape from the thresholds of Israel’s colonial regime of perception, the subsequent recognizability or clandestinity, transparency or secrecy, are all perceived by Israel as pure hostility.

To escape from view as a Palestinian is to be viewed as a fugitive threat. The proliferous destruction of civilian architecture in Gaza is preemptively and retroactively justified with claims that enemy combatants and weapon caches are being hidden inside of them, every bomb destroying the conditions for life and the conditions of concealment with the blinding exposure of its blast. Inversely, to enter into view as a Palestinian is to be viewed as an invasive enemy. In the West Bank, Palestinian demonstrations filled with cameras, banners, portraits of martyrs, and flags are made to vanish within toxic obfuscating clouds of tear gas. Attempting an escape from the view of Israel is to be marked as a hostis and fugitive in need of surveillance, capture, and elimination, while entering into Israel’s view is to be marked as an invader and as an infiltrator in need of exclusion, eviction, and expulsion.