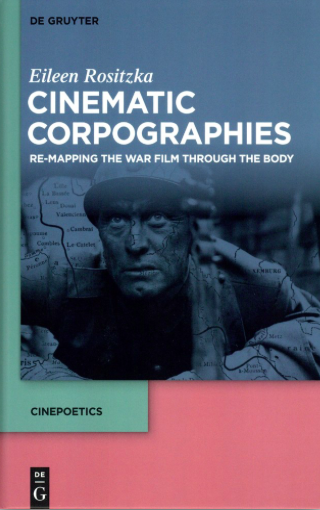 News from Eileen Rositzka of her new book, Cinematic Corpographies: Re-Mapping the War Film Through the Body.  We’ve been corresponding since she started work on the project at St Andrews (she’s now at the Free University of Berlin), and I’m thrilled to see it in print (and on my screen):

Writing on the relationship between war and cinema has largely been dominated by an emphasis on optics and weaponised vision. However, as this analysis of the Hollywood war film will show, a wider sensory field is powerfully evoked in this genre. Contouring war cinema as representing a somatic experience of space, the study applies a term recently developed by Derek Gregory within the theoretical framework of Critical Geography. What he calls “corpography” implies a constant re-mapping of landscape through the soldier’s body. These assumptions can be used as a connection between already established theories of cartographic film narration and ideas of (neo)phenomenological film experience, as they also entail the involvement of the spectator’s body in sensuously grasping what is staged as a mediated experience of war. While cinematic codes of war have long been oriented almost exclusively to the visual, the notion of corpography can help to reframe the concept of film genre in terms of expressive movement patterns and genre memory, avoiding reverting to the usual taxonomies of generic texts.

Measuring the Trenches: Corpographies of the First World War

From Above and From Within: Aerial Views and Corpographic Transformations in the WWII Combat Film

Uncharting Territories: The Vietnam War’s Shattering of the Senses

Zero Dark Thirty: Corpographies of the War on Terror