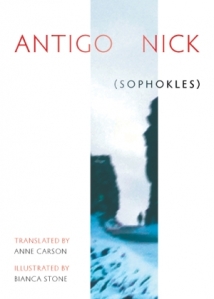 It’s been over a decade since Judith Butler reflected on Antigone, ‘the renowned insurgent’ from Sophocles’ Oedipus, in Antigone’s Claim: kinship between life and death (Columbia, 2000), but I’ve been reading and re-reading her latest thoughts, inspired by Anne Carson‘s visual-textual translation Antigonick (or is it Antigo Nick?) (New Directions, 2012) at Public Books here.

Carson’s project – she’s both a poet and a classicist – raises a series of urgent questions about translation and tragedy, and about the connective imperatives between the two.

Those links spiral in and out of Butler’s recent work too, and this is how she concludes her review-reflection:

Antigone rages forth from grief, causing new destruction, and so, too, does Kreon; they mirror each other in the midst of their opposition. So, too, do you, apparently, and everyone else as well, nodding and driving off, unless we catch ourselves in time. The reader is implicated in this recurrent alteration of grief and rage, subject to the destruction she or he is capable of inflicting, if there is no timely intervention.

Apparently “you” already know why tragedy exists. What Carson writes of Paul Celan’s direct address to the “you” offers us a formulation that may well apply to her Antigonick: “But you, by the time we reach you, are just folding yourself away into a place we cannot go: sleep. Blank spaces instead of words fill out the verses around you as if to suggest your gradual recession down and away from our grasp. What could your hands teach us if you had not vanished?”  It is a cry of grief posed in question form, emphatic, handwritten, excessive and abbreviated and, in this sense, a measured scream that gives us some sense of who or what lives on when it is all too late. 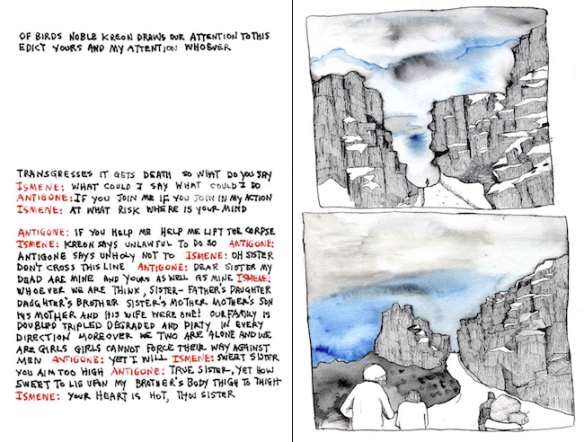 If that seems too general – I don’t think it is at all – then read Nicholas Mirzoeff‘s take on Antigo Nick on his Occupy 2012 blog here.

As predicted, Greece is having its Antigone revolution in refusing to abide by the Law in favor of kinship. For the majority who voted for Syriza and other anti-memorandum parties, mutual aid outweighs obligations to creditors. In the first days of this project, you may recall, I was very taken with a reworking of the Antigone legend in the context of the global social movements by Italian performance group Motus. The proper treatment of the dead body was later visualized by the Egyptian video collective Mosireen. And so when the chant “A-Anti-Anticapitalista” became the subject of a later post, I rewrote it in my head in my geeky way to go “A-Anti-Antigone.”

And if it’s still too elliptical, try Brian Patrick Eha‘s review of Antigonick at New Inquiry (he brilliantly describes it as ‘Antigone after Sarah Kane’, who wrote Blasted):

Never have we had so much direct access to grief. Photographs, television, and the Internet all promise to bridge the unbridgeable gap—to give us, our isolated egos, a means of ingress into the walled city of another’s suffering. What they deliver is an endless series of images like the one of the girl in the green dress that recently won a Pulitzer Prize. The photographer, Massoud Hossaini, captured the aftermath of a vicious bomb blast in Kabul, and in his picture the now-famous “girl in green,” who is eleven years old, stands amid the mangled bodies of the dead, stands crying out, in her utter anguish, as if from the bottom of a well, beyond our power to console. She screams noiselessly in the silence of the photograph, forever.

It’s easy to see why this picture won prizes. One can hardly fail to be moved by it. But at the same time that we are bombarded with compelling photographs and video footage that seem to give us access to emotions not our own, these images remain intrinsically mediated, revealing only surfaces, and our sympathy pains too often serve no utility.

Along with our hunger for grief comes impatience with emotional restraint. From the tearful confrontations of Intervention to the acting out of The Bad Girls Club, in our popular entertainments—period dramas like Downton Abbeybeing the rare exception—there’s nary a stiff upper lip in sight. Our age doesn’t do restraint, full stop. Emotions are expressed to their fullest, and these expressions are broadcast for consumption. Understated expressions of grief have largely vanished from society. We no longer dress for mourning except at hasty funerals, and even there the custom survives only in cheap black suits no less shabby than the rented tuxedos that now make our weddings feel forced. When did you last see a man wearing a black armband in remembrance of a fallen friend?

So Anne Carson’s blunt Antigonick has arrived at the right cultural moment, if not for poetry than for grief….

1 thought on “Grief, tragedy and translation”