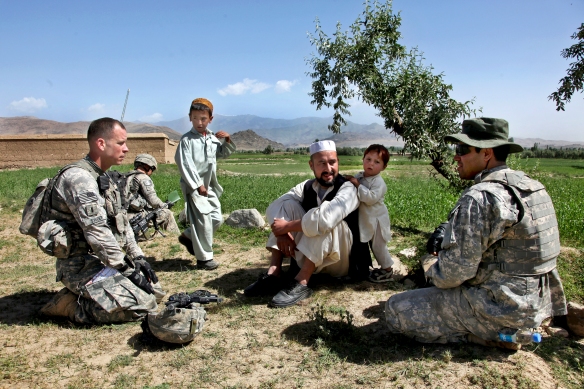 The power of coincidence.  Just after I finished posting about the fog (and friction) of war, I opened an e-mail from Vince Rafael, who was at UBC a year or so ago to present a paper on counterinsurgency on which I’d been asked to comment.  He’s now sent me the published version, ‘Targeting translation: counterinsurgency and the weaponization of languiage’, which appears in the latest issue of Social Text 30 (4) (2012) 55-80.  It’s a characteristically elegant, original and powerful argument:

The chronic failure of counterinsurgency to convert language, whether its own, English, or the other’s, into a weapon, that is, into a standing reserve that could be switched, secured, and deployed, tends to generate catastrophic effects. Targets are missed or misconstrued, accidents abound, death proliferates, while no one is held accountable. As I have been suggesting, the resistance of language to weaponization is not incidental but structurally built into the very discourse and practices of counterinsurgency. That counterinsurgency harbors the very elements of its own undoing can be understood in at least two ways. On the one hand, as military leaders and engineers tend to think of it, the intractability of language could be regarded as a kind of noise that adds to the friction of war: merely a technical problem that can be fixed with greater application of resources, financial and technological, and a strengthening of political will. On the other hand, we could think of the insurgency of language as evidence of the possibility of another kind of translation practice at work. Operating in between the lines of imperial commands, it would be a kind of translation that evades targeting, spurring instead the emergence of forms of life at variance with the biopolitical prescriptions of counterinsurgency.

It’s an argument that not only extends the standard critique of ‘the weaponization of culture’ directly into the domain of language but also explores, in Vince’s brilliant coda ‘Translating otherwise’, the confounding capacities of language to refuse the reduction of the life of the Other to a target.