I suspect most people attribute the metaphoric “fog of war” to Clausewitz’s critical reflections on the Napoleonic wars and then fast-forward to Erroll Morris‘s brilliant 2003 film about Robert Strange (sic) McNamara, The Fog of War, which centres on the Second World War and Vietnam.

Both turn out to be more problematic than they seem. First, although Clausewitz mentioned ‘fog’ several times in his manuscript On War he never used the phrase “fog of war”; this is the sentence that probably comes closest to the contemporary meaning:

In a brief commentary, Eugenia Kiesling suggests that Clausewitz made much more of ‘the friction of war’ than ‘fog’ (and was right to do so) and, more originally, that he gave it a peculiar moral force.  In fact, the two are closely connected: Victor Rosello had already noted that following ‘the metaphorical path of Clausewitzian fog-shrouded battlefields which defy attempts at penetration owing to insurmountable uncertainty’ led directly to ‘the ascendancy of the moral domain’:

‘These moral influences are the role of chance; the imponderables of fog and friction and their effects on the reliability of information; the limitation inherent in observation; the inability to penetrate the mind of the adversary; the dominance of preconception over fact; and the limitations of intelligence analysis.‘

And, second, here is McNamara, at the very end of Morris’s film (from the transcript):

We all make mistakes. We know we make mistakes. I don’t know any military commander, who is honest, who would say he has not made a mistake. There’s a wonderful phrase: “the fog of war.”  What “the fog of war” means is: war is so complex it’s beyond the ability of the human mind to comprehend all the variables. Our judgment, our understanding, are not adequate. And we kill people unnecessarily.

This isn’t quite what Clausewitz meant, but in any case even at the age of 85 McNamara had lost none of his ability to manufacture his own fog: as Fred Kaplan asked at the time, ‘What’s true and what’s a lie in The Fog of War?’ In effect, McNamara turns Clausewitz on his head and uses ‘the fog of war’ as an ethical defence (or, more accurately perhaps, distraction).

I’ve been led down these pathways by my continuing preoccupation with the First World War.  I’ve noted before the metricization of the battlefield on the Western Front: the meticulous planning of what Clausewitz would have called ‘paper war’ on the abstract spaces of maps.  No matter how frequently these were updated, revised and annotated, their purchase on the course of combat was ineluctably limited once the infantry went over the top.  On the British side, telephone and telegraph lines snaked back from the front lines to an ascending series of headquarters in the rear (an appropriate location in more ways than one), but as John Keegan wrote in The Face of Battle, these lines of communication, however imperfect, had one further, disabling limitation: they stopped at the end of no man’s land.

On the Somme, he wrote, 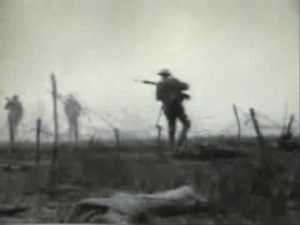 ‘Once the troops left their trenches, as at 7.30 a.m. on July 1st, they passed beyond the carry of their signals system into the unknown. The army had provided them with some makeshifts to indicate their position: rockets, tin triangles sewn to the backs of their packs as air recognition symbols, lamps and flags, and some one-way signalling expedients, Morse shutters, semaphore flags and carrier pigeons; but none were to prove of real use on July 1st.

‘That a party could disappear so completely, not in the Antarctic wastes but at a point almost within visual range of their own lines, seems incomprehensible today, so attuned are we to thinking of wireless providing instant communication across the battlefield. But the cloud of unknowing which descended on a First World War battlefield at zero hour was accepted as one of its hazards by contemporary generals. Since the middle of the nineteenth century, the width of battlefields had been extending so rapidly that no general could hope to be present, as Wellington had made himself, at each successive point of crisis; since the end of the century the range and volume of small-arms fire had been increasing to such an extent that no general could hope to survey, as Wellington had done, the line of battle from the front rank. The main work of the general, it had been accepted, had now to be done in his office, before the battle began.’

As Keegan says, there were various attempts to allow GHQ to monitor the progress of the battle. Here is one of the most fanciful, not included in his list, which involved re-imposing cartographic vision – what Edmund Blunden called in Undertones of war its ‘innocuous arrows’ and ‘matter-of-fact symbols’ – on the obdurately physical, all-too-corporeal battefield.  In Somme success: the Royal Flying Corps and the Battle of the Somme, Peter Hart reproduces this report from 2nd Liuetenant Cecil Lewis, describing a so-called ‘contact patrol’:

‘We had all our contact patrol technique perfected and we went right down to 3,000 feet to see what was happening.  We had a klaxon horn on the undercarriage of the Morane – a great big 12 volt klaxon, and I had a button which I used to press out a letter to tell the infantry we wanted to know where they were.  When they heard us hawking them from above, they had little red Bengal flares, they carried them in their pockets, they would put a match to their flares.  All along the line wherever there was a chap there would be a flare, and we would note those flares down on the map and Bob’s your uncle!’

Not difficult to see why A.M. Burrage gloomily wrote in War is war that the infantry were ‘the little flags which the General sticks on the war-map to show the position of the front line’…  But, Lewis continued,

‘It was one thing to practice this but quite another for them to really do it when they were under fire, and particularly when things began to go a bit badly. Then they jolly well wouldn’t light anything and small blame to them because it drew the fire of the enemy on to them at once.’

1 thought on “The fog-horn of war”