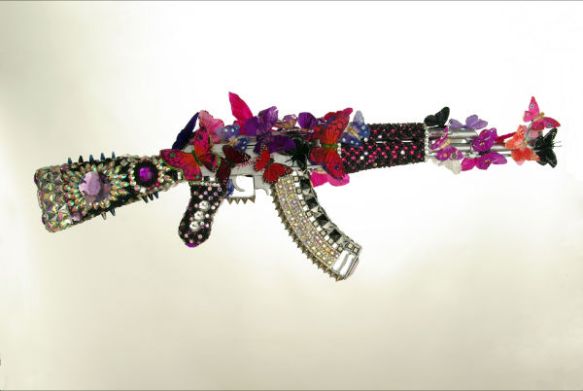 I’ve had a message from Laila Shawa, whose work I noted earlier, enclosing one of her latest projects (and generously allowing me to show her work here).  Where Souls Dwell (above) is from her Gun series and speaks directly to one of my very first posts (on the arms trade); it shows the AK-47, and Leila explains it like this:

Next to Drones, this gun is the biggest killing machine in the World. Due to its cheap production by everyone, it is in the hands of everyone, including children!! The Butterflies (in World mythology) represent the souls killed by this gun, and their return to the place (or cause) of their death.

I provided a brief bibliography of work on the AK-47 and the trade in ‘small arms’ in my original post, but I wasn’t aware of the way in which artists had engaged with this deadly weapon.  Last September Laila’s work was featured as part of the AKA Peace Exhibition at the Institute for Contemporary Art in London.

The exhibition was conceived by an ex-soldier who challenged 23 contemporary artists to incorporate decommissioned AK-47 assault rifles into their work. You can see some of the results, including those by Antony Gormley and Damien Hirst, here, here and here.  Laila adds:

“The challenge of altering and removing the raison d’êtres of an AK-47 is irresistible. I turned my guns into jewelled objects that can only be useless!!! In no way was I trying to glorify lethal weapons that are responsible for the death of hundreds of thousands of people.

I feel that artists must speak out against the arms race, wars, and the Arms Industry,which drives countries to create unnecessary wars.

According to mythology, the souls of people killed return as butterflies to the place where they were killed. The butterflies in this work represent those souls.

My first AK-47, was commissioned by Peace One Day, a peace organization under the patronage of the United Nations, and was exhibited at the ICA London in October 2012 under the title ‘AKA Peace.’ Later it was sold in a public auction to raise money forPeace One Day. 20 British artists participated in this show amongst which were Damien Hirst, Anthony Gormley, Gavin Turk and the Chapman Brothers. The AK-47 (Kalashnikov) is the most produced gun in the world, in various versions. There are over 200 million AK-47s in circulation, quite often, and most irresponsibly, in the hands of children.”

There are many implications arising from all this – the most direct, of course, about these killing machines.  But these interventions also underscore the need for those of us working in the humanities and social sciences to engage with the work of creative artists, not only as critics and commentators but also as interlocutors interested in exploring other media in which to develop our arguments.

1 thought on “Where Souls Dwell”