Rafia Zakaria, a columnist for Dawn, Pakistan’s largest-circulation English-language newspaper, reflects at Guernica on the disjuncture between the global attention paid to the victims of violence in her own country and those in the United States:

Attacks in America are far more indelible in the world’s memory than attacks in any other country. There may be fewer victims and less blood, but American tragedies somehow seem to occur in a more poignant version of reality, in a way that evokes a more sympathetic response. Within minutes American victims are lifted from the nameless to the remembered; their individual tragedies and the ugly unfairness of their ends are presented in a way that cannot but cause the watching world to cry, to consider them intimates, and to stand in their bloody shoes. Death is always unexpected in America and death by a terrorist attack more so than in any other place.

It is this greater poignancy of attacks in America that begs the question of whether the world’s allocations of sympathy are determined not by the magnitude of a tragedy—the numbers dead and injured—but by the contrast between a society’s normal and the cruel aftermath of a terrorist event. It is in America that the difference between the two is the greatest; the American normal is one of a near-perfect security that is unimaginable in many places, especially in countries at war.

I’m not so sure the differential apprehension can be explained quite so cleanly – that ‘American normal’ is shot through with violence and insecurity for millions of people too, and on the same day that Rafia published her essay the Guardian reproduced this map of terrorist incidents in the United States 1970-2011; the animated version is here. 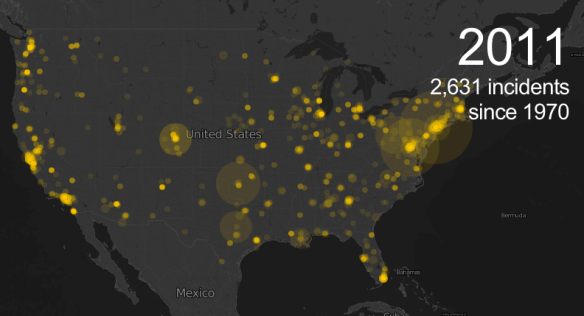 The data on which the map is based raise all sorts of questions, of course, but still the numbers surprised me.  America is even more violent than I had imagined.

And yet Rafia does have a point; the scale of political violence in Pakistan is surely far greater than this, and yet its victims received far less sympathetic attention from audiences outside the country than many of those elsewhere in the world.  This habituation to the violence done to others (Others?) intersects with Susan Sontag‘s reflections on the suffering of others, and it’s that multi-stranded process of othering that deserves critical reflection.  But I think Rafia is on to something important when she suggests that this is about places as well as peoples – about the ways in which habituation and habitus are bound in to apprehensions of different places.  Place is one of the crucial ways in which we navigate the world, physically and imaginatively, through the spatial cues provided by the meanings that become attached to place (what does ‘Baghdad’ signify to you?) and the places that become attached to meaning (which places are made to stand for ‘violence’?).  I realise I’m using shorthand, but it is the differential play between these meanings-in-place that surely has a significant role in our (dis)regard for the pain of others.