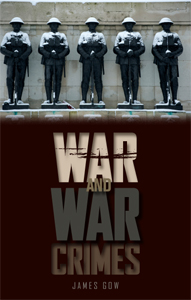 While we’re on the subject of war crimes – and, as you’ll see shortly, my visit to Poland and the Czech Republic gave me new opportunities to reflect on the enormity of violence  – news of a new book from James Gow, Professor of International Peace and Security at King’s College London, War and War Crimes: the military, legitimacy and success in armed conflict (Hurst, April 2013):

The laws of war have always been concerned with issues of necessity and proportionality, but how are these principles applied in modern warfare? What are the pressures on practitioners where an increasing emphasis on legality is the norm? Where do such boundaries lie in the contexts, means and methods of contemporary war? What is wrong, or right, in the view of military-political practitioners, in how those concepts relate to today’s means and methods of war? These are among the issues addressed by James Gow in his compelling analysis of war and war crimes, which draws upon research conducted over many years with defence professionals from all over the world. Today more than ever, military strategy has to embrace justice and law, with both being deemed essential prerequisites for achieving success on the battlefield. And in a context where legitimacy defines success in warfare, but is a fragile and contested concept, no group has a greater interest in responding to these pressures and changes positively than the military. It is they who have the greatest need and desire to foster legitimacy in war by getting the politics-law-strategy nexus right, as well as developing a clear understanding of the relationship between war and war crimes, and calibrating where war becomes a war crime.

There is a considerable literature on war crimes, both general discussions of international law and tribunals and specific accounts of serial violations, but Gow’s book promises to open up a different dimension. One of the diagnostic features of later modern war is its reflexivity, a keen interest in monitoring the conduct of conduct and a close attention to public attention, twin developments which help to account for the close involvement of military lawyers in the ‘prosecution of the target’ and the rapid growth of ‘media operations’ across a range of social platforms.  So I’m interested in this plaudit from Jeremy Jarvis at the Royal College of Defence Studies:

‘At the heart of this authoritative examination of the legitimacy of war and its conduct in the twenty-first century, James Gow refreshingly gives voice to the military judgment of professionals from around the world, as military officers themselves best understand the moral dilemmas they face and can best explain the context, at the strategic and tactical levels, which is so crucial to determining whether war crimes have been committed.’

I think there’s rather more to it than that, needless to say, but it’s certainly important to understand how the kill-chain has been ‘lawyered up’: much more on all this from Craig Jones at War, law and space. 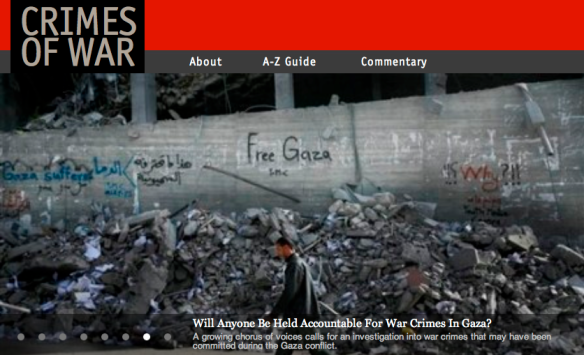 If you want an easily accessible resource then Crimes of War, a collaboration between lawyers,  journalists and scholars provides both an A-Z Guide and a Commentary on current events.  It’s indispensable, as are the provocative posts (which address a wider range of topics than war crimes) at Lawfare and Opinio Juris.