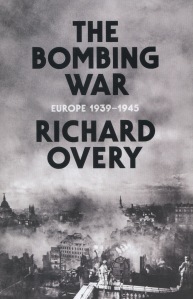 I’m slowly working my war through Richard Overy‘s magisterial account of The Bombing War: Europe 1939-1945; the subtitle is a necessary reminder that this wasn’t the only ‘bombing war’ of the period, but Overy’s scope is still much wider than the usual focus on the Blitz and the combined bomber offensive against Germany.  Too soon for me to work out what I think, but there’s an appreciative review by another brilliant historian of the period, Richard J. Evans, in the Guardian here.  Evans calls The Bombing War ‘probably the most important book published on the history of the second world war this century.’

Evans’s summary of bombing’s ‘surprising inefficiency’ and ‘staggering inaccuracy’ is worth repeating:

Bombing was surprisingly inefficient. As Overy shows, poor visibility, the sudden deterioration of weather conditions, malfunctioning equipment, outdated and slow-moving aircraft, pilot inexperience or crew exhaustion, and enemy action varying from anti-aircraft batteries to night-fighters or the jamming of navigation beams, all reduced the effectiveness of bomber fleets. Aircraft crashed, ran out of fuel or suffered engine failure with astonishing frequency. In its raids on Britain from January to June 1941, for example, 216 German bombers were lost and 190 damaged; 282 of these were as a result of flying accidents. The death rate among bomber crews was appallingly high (crew members in Bomber Command had a one-in-four chance of surviving their first tour of duty, and a one-in-10 chance of surviving their second) but not all of it was as a result of enemy action. At the end of 1941 Bomber Command reckoned that it was losing six aircraft to accidents for every one shot down by the enemy. The British and especially the Americans could make good these losses, and more besides; in the end, Germany’s smaller resources meant that the German air force was increasingly outproduced.

Above all, bombing was staggeringly inaccurate. Bomber fleets had to fly high to avoid anti-aircraft fire from the ground, so even if the weather was clear, they were often unable to locate their targets effectively. On one mission, Robert Kee, a bomber pilot who later became a successful historian, “bombed some incendiaries at what we hoped was Hanover” but mostly dropped his bombs on searchlight concentrations because that was all he could see through the cloud. One report, compiled in September 1941, reported that only 15% of aircraft were bombing within five miles of their target. In the last three months of 1944, it was reckoned that only 5.6% of bombs fell within a mile of the aiming point if there was cloud, despite the use of electronic navigation aids. One raid on a major oil plant saw 87% of the bombs missing their target entirely, and only two actually hitting the buildings.

There’s also a thoughtful review of The Bombing War by Keith Lowe here; Lowe’s account of the bombing of Hamburg, Inferno: the devastation of Hamburg, 1943, is another tour de force, which describes both the execution of the air raids and the consequences for those on the ground. Claire Tomalin‘s review of Inferno closed with a sentence that has haunted me ever since I read it: ‘Once you are committed to fighting, you are going to kill the innocent with whatever technology you have developed.’  Overy does discuss those consequences too, but I think it’s fair to say that the tone of his discussion is largely (though not exclusively) policy-directed – a matter of response rather than experience. 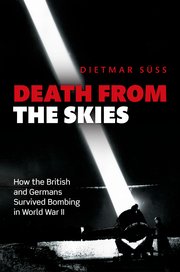 There are now a number of major studies of the effects of bombing individual cities, and Jörg Friedrich‘s The Fire: the bombing of Germany 1940-1945 is also indispensable.  But for an account of the experiences of those crouching (and dying) under the bombs on an equally epic scale to Overy, albeit confined to Britain and Germany, we have to wait for Dietmar Süss‘s  Death from the skies: how the British and Germans survived bombing in World War II, due from Oxford University Press next spring.  Originally published in 2011 as Tod aus der Luft, the book has been a bestseller in Germany.  Stefan Goebel provides a detailed review here:

‘The publication of Tod aus der Luft is to be highly welcomed, not least because it breaks into a market that for too long has been dominated by popular accounts on the one hand and official histories on the other. Süß’s extraordinary book combines the virtues of both genres: delivered with great panache, it is also based on a scrupulous examination of archival records. Potential buyers of Tod aus der Luft can expect multiple ‘two-in-one’ deals: not only is this book both sophisticated and accessible, written by an academic historian with a background in journalism, it is also a stimulating synthesis of the social, political, and cultural history of war, and a thoughtful comparative study of Britain (or ‘England’, as Süß has it) and Germany in the era of the Second World War…

‘At the centre of this comparative study are not the political systems (even though Süß has a great deal to say about their institutional structures) but the emergence of a Kriegsmoral (war morale) at the intersection of individual experiences and political mobilization. Moreover, this hefty tome is not meant to be a comprehensive ac-count of the British and German bombing campaigns of the Second World War. Rather, the author’s approach might be described as a history of the air war ‘from below’: one that is focused on the fear, experience, and memory (of people on the ground) of death and destruction….

‘The construction of a Kriegsmoral became the central preoccupation of both societies during the air war. This book offers an intriguing exploration of the comparative method; the author’s discussion of British society during the Blitz throws many aspects of the German experience of the air war into much sharper relief (and vice versa).’

Both books are, appropriately, blockbusters: Overy comes in at 880 pp and Süss  at 736 pp.