With all the usual caveats about the notoriously contentious definition(s) of ‘terrorism’,  the National Consortium for the Study of Terrorism and Responses to Terrorism (START), which has been up and running at the University of Maryland since 2005, has now geocoded its Global Terrorism Database – at least for 2012 – and from its list of more than 8,400 terrorist attacks that killed over  15,400 people its has produce this map of terrorist attacks last year: 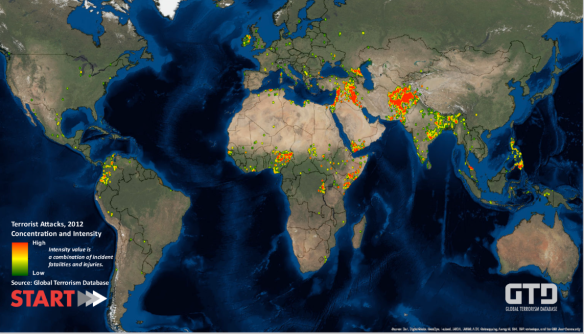 ‘Although terrorism touched 85 countries in 2012, just three – Pakistan, Iraq and Afghanistan – suffered more than half of 2012’s attacks (54%) and fatalities (58%)… The next five most frequently targeted countries were India, Nigeria, Somalia, Yemen and Thailand.’

You can download a hi-res and zoomable version here, and you can find out more about START here.

Of course, it’s a moving map:

‘In the 1970s, most attacks occurred in Western Europe. In the 1980s, Latin America saw the most terrorist acts. Beginning with the 1990s, South Asia, North Africa and the Middle East have seen steadily rising numbers of attacks, a trend that has accelerated in recent years.’

And since START is a ‘Center of Excellence of the US Department of Homeland Security’ then, no, the map doesn’t include US drone strikes or attacks on civilians carried out by US allies.