I’ve been thinking about the description of Gaza as a space of exception in my last post, and I will elaborate (and qualify) that discussion shortly: in many ways the Israeli offensive against Gaza reinforces Achille Mbembe‘s arguments about necropolitics but, as I’ll try to show, suggests the need for a reworking of Giorgio Agamben‘s claims about the exception.

En route, I’ve been greatly taken by the work of Janina Dill (Politics and International Relations, Oxford) – particularly her discussion of Israel’s development of ‘Lawfare 2.0’ in relation to Gaza – and, as I say, I’ll have much more to say about that shortly.  But I’ve also discovered she has a book due out from Cambridge in the fall which, like her (I imagine summary) chapter in The American Way of Bombing, speaks to my own work on genealogies and geographies of bombing: Legitimate Targets? Social construction, international law and US bombing. 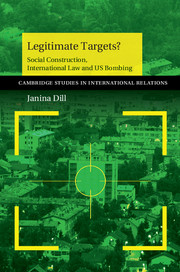 Based on an innovative theory of international law, Janina Dill’s book investigates the effectiveness of international humanitarian law (IHL) in regulating the conduct of warfare. Through a comprehensive examination of the IHL defining a legitimate target of attack, Dill reveals a controversy among legal and military professionals about the ‘logic’ according to which belligerents ought to balance humanitarian and military imperatives: the logics of sufficiency or efficiency. Law prescribes the former, but increased recourse to IHL in US air warfare has led to targeting in accordance with the logic of efficiency. The logic of sufficiency is morally less problematic, yet neither logic satisfies contemporary expectations of effective IHL or legitimate warfare. Those expectations demand that hostilities follow a logic of liability, which proves impracticable. This book proposes changes to international law, but concludes that according to widely shared normative beliefs on the twenty-first-century battlefield there are no truly legitimate targets.