I suspect anyone interested in international/transnational legal geographies will know of Jens David Ohlin‘s work already (he’s Professor of Law at Cornell and recently co-edited Targeted Killings: Law and Morality in an Asymmetrical World [Oxford, 2012]).  If not, check out his page on ssrn for recent papers; I’ve found three particularly helpful in thinking about US air strikes in Afghanistan and Pakistan and, more recently, the Israeli offensive against Gaza (more on this and the space of exception soon, I promise):

Targeting and the concept of intent (2013); Acting as a sovereign versus acting as a belligerent (2014); and The combatant’s privilege in asymmetric and covert conflicts (2014)

I’ve just received news of his new book out early in the New Year, whose relevance will be apparent from its title: The assault on international law. 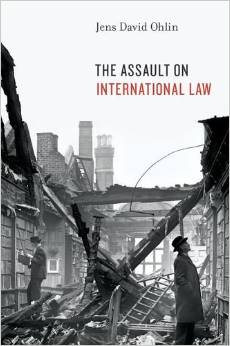 International law presents a conceptual riddle. Why comply with it when there is no world government to enforce it? The United States has a long history of skepticism towards international law, but 9/11 ushered in a particularly virulent phase of American exceptionalism. Torture became official government policy, President Bush denied that the Geneva Conventions applied to the war against al-Qaeda, and the US drifted away from international institutions like the International Criminal Court and the United Nations.

Although American politicians and their legal advisors are often the public face of this attack, the root of this movement is a coordinated and deliberate attack by law professors hostile to its philosophical foundations, including Eric Posner, Jack Goldsmith, Adrian Vermeule, and John Yoo. In a series of influential writings they have claimed that since states are motivated primarily by self-interest, compliance with international law is nothing more than high-minded talk. Theses abstract arguments then provide a foundation for dangerous legal conclusions: that international law is largely irrelevant to determining how and when terrorists can be captured or killed; that the US President alone should be directing the War on Terror without significant input from Congress or the judiciary; that US courts should not hear lawsuits alleging violations of international law; and that the US should block any international criminal court with jurisdiction over Americans. Put together, these polemical accounts had an enormous impact on how politicians conduct foreign policy and how judges decide cases – ultimately triggering America’s pernicious withdrawal from international cooperation.

In The Assault on International Law, Jens Ohlin exposes the mistaken assumptions of these ‘New Realists,’ in particular their impoverished utilization of rational choice theory. In contrast, he provides an alternate vision of international law based on a truly innovative theory of human rationality. According to Ohlin, rationality requires that agents follow through on their plans even when faced with opportunities for defection. Seen in this light, international law is the product of nation-states cooperating to escape a brutish State of Nature–a result that is not only legally binding but also in each state’s self-interest. 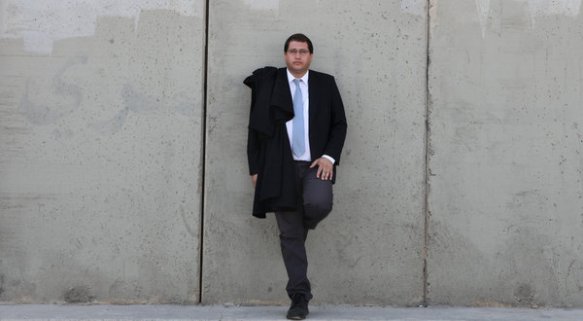 But not all assaults on international law derive from the United States and from professors hostile to its philosophical foundations.  I urge you to read Michael Sfard‘s coruscating Op-Ed from Ha’artez on 4 August, ‘A “targeted assassination” of international law‘ (which is also available here if it disappears behind a paywall).  Michael is an Israeli human rights lawyer, specializing in international humanitarian law and dealing directly with the Israeli occupation of Palestine, and he is also the legal adviser to Yesh Din: Volunteers for Human Rights:

Israelis are surprised. Did I say surprised? Downright shocked. Even before the dust from the fighting has settled, even before this “most just of all wars” has ended, even as the most moral army in the world is still mired in Gaza – there is already talk of war crimes and an international investigation.

We, who didn’t carpet-bomb even though we could have, who dropped fliers and made phone calls and knocked on the roof; we, who agreed to the humanitarian cease-fire that Hamas violated; we, who took more precautions than any other nation would have done – we are once again being accused of war crimes. Once again, the same old song is being sung: decisions about opening an international investigation, talk of the International Criminal Court, fear of arrests in Europe. And we don’t understand why we deserve all this.

It is possible to console ourselves by accepting the explanation that the television journalists keep repeating to us: that the world is anti-Semitic and two-faced and supports Hamas. But this would constitute a regrettable evasion of the tough questions. It would constitute an effort to flee the pointed discussion Israeli society ought to be holding about the way we have waged armed conflicts with our enemies over the last decade.

Since the Second Lebanon War of 2006, the Israel Defense Forces has adopted an extremely problematic combat doctrine for conflicts that take place in urban areas with dense civilian populations, and in which the enemy is seen as an illegitimate terrorist entity (Hezbollah in Lebanon and Hamas in Gaza). This combat doctrine is supported by a legal theory developed by the IDF’s international legal division, which interprets the laws of war in a manner that is shockingly different from their accepted interpretation by experts in the field worldwide. Its direct result is massive civilian casualties and the destruction of civilian neighborhoods.

This combat doctrine consists of two elements, each of which is a declaration of war against the fundamental principles of the laws of armed combat. The first element redefines what constitutes a legitimate target for attack, such that it now includes not only classic military targets (bases, combatants, weapons stockpiles and so forth), but also facilities and objects whose connection to the enemy organization is nonmilitary in nature….

The second element is even more far-reaching: It holds that when fighting in urban areas, we are entitled to treat the entire area as a legitimate target and bombard it via air strikes or artillery shelling – as long as we first warn all the residents of our intention to do so and give them time to leave. The IDF first used this method in Beirut’s Dahiya neighborhood during the Second Lebanon War. Before bombing, the army dropped fliers telling the residents to leave. Then the bombs were dropped, and most of Dahiya’s houses were destroyed.

This doctrine was applied, to varying degrees, in Operations Cast Lead and Protective Edge as well, primarily in Gaza City’s Shujaiyeh neighborhood. It does not take into consideration the question of whether the prior warning given the population is effective – i.e., whether the population can in fact leave, whether solutions have been found for the elderly, the ill and the children. Nor is it accompanied by the creation of a safe corridor through which people can flee to someplace that won’t be fired on, and where civilians have what they need to survive.

The terrifying result of this combat doctrine, in both Cast Lead and Protective Edge, was piles of bodies of women, children and men who weren’t involved in the fighting….

The IDF’s lawyers, who provide legal support for this combat doctrine, are conducting a “targeted assassination” of the principles of international law: the principle of distinction, which requires differentiation between military targets (which are legitimate) and civilian targets (which aren’t); the principle of proportionality, which forbids attacking even a legitimate target if the anticipated harm to civilians is excessive in comparison to the military benefit from the target’s destruction; and the need to take effective, rather than merely symbolic, precautions.

2 thoughts on “Legal geographies and the assault on international law”