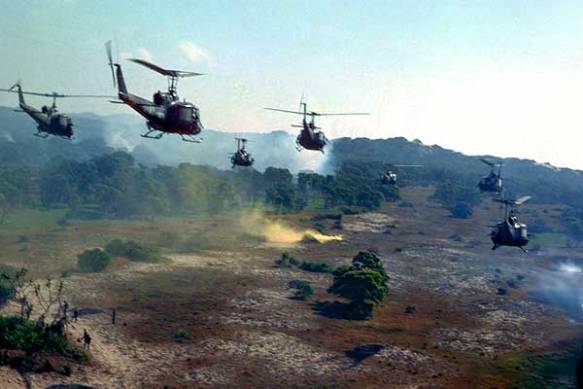 The war in Vietnam was often heralded as ‘a new kind of war’, one that reached its awful climax in what James Gibson brilliantly criticised as ‘technowar’.  It had many dimensions, including the reintroduction of chemical warfare (Agent Orange and all the other herbicides) and the development of the ‘electronic battlefield’.

But at the time the US Army made the most of its commitment to what it called ‘air mobility’.

As you can see from this contemporary Army video, the concept was claimed as revolutionary (and, in its way of course, counter-revolutionary).  ‘An entirely new concept of warfare known as heli-borne or air mobile operations has been developed by the United States Army,’ claims the commentator, ‘and has been successfully employed to meet the problems posed by South East Asia’s hostile wilderness and bye enemy who hides there.’

In fact, it wasn’t invented in Vietnam, but it was a dominant mode of army operations there: you can download the US Army’s historical report on Air mobility 1961-1971 here, for example, the Vietnam Center and Archive has a helpful page on ‘The helicopter war’ here, and you can read an extract from Walter Boyne‘s How the helicopter changed modern warfare here.  There is also a considerable literature on ‘dust-off‘ that I’m working through for my new research project on casualty evacuation in war zones.

And don’t forget its role in popular culture.  The helicopter loomed large in the iconography of Francis Ford Coppola‘s Apocalypse Now (1979):

More recently Pete Adey provided a summary of a more general concept of ‘aeromobilities’ [Geography Compass 2/5 (2008) 1318-1336] though his emphasis, perhaps not surprisingly, is on vision.

What interests me here, though, is another capacity, and one without which the potential of air mobility would have remained unrealised.

I’m talking about the voice on the radio.  I’ve written about the role of the forward air controller before, and the parallels between the air strikes they directed in Vietnam and today’s remote operations in Afghanistan (see ‘Lines of descent’, DOWNLOADS tab). 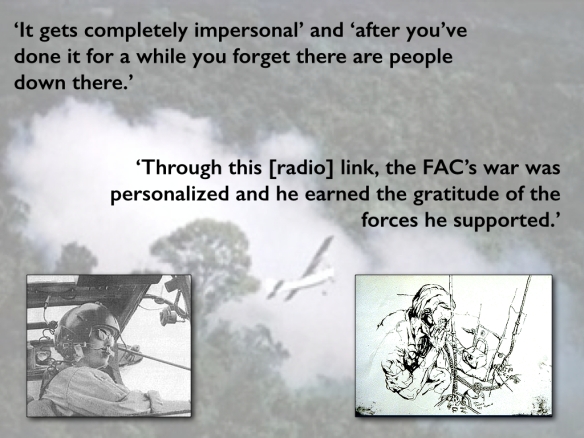 This destructive power was captured with extraordinary economy by Phil Caputo in A Rumor of War:

Simply by speaking a few words into a two-way radio, I had performed magical feats of destruction. Summoned by my voice, jet fighters appeared in the sky to loose their lethal droppings on villages and men. High-explosive bombs blasted houses to fragments, napalm sucked air from lungs and turned human flesh to ashes. All this just by saying a few words into a radio transmitter. Like magic.

But the radio was part of a much wider network of military violence and military logistics in Vietnam.  Here is Frederick Downs in The killing zone:

With the radio, we grunts could make use of modern weapons. Without it, everything stayed put. We used the radio to call in artillery, naval gun support if it was close enough, air strikes, gunships, dustoffs, Puff the Magic Dragon [the AC-47 gunship], mortars, tanks, APCs and other rifle platoons. The radio kept us supplied. One day our order went in; the next day the chopper flew out with a delivery. We found each other by using grid coordinates and radioing them back and forth. A pilot knew he had the right location when we popped smoke and he identified it over the radio. By this method, we received C rations, ammo, new weapons, grenades, parts for our equipment, shoes, new clothes, underwear, socks, medicine, personnel replacements, beer, iodine tablets for use in the water, mail, and once in a while even a chaplain. To complete the cycle, the radio was used to extract us from trouble. Saving a life was often a matter of seconds. The radio was also a comfort at night. The periodic radio checks assured us that friends and help were always near.

Here too, incidentally, there are lessons for contemporary analysis: satellite imagery is clearly of vital significance for today’s advanced militaries, but so too are satellite communications.  I’ll discuss this is another post, but without those communication links there would be no full-motion video-feeds from all those Predators and Reapers – and their operating range would be dramatically constricted.  Ground operations in Afghanistan and elsewhere would also be virtually impossible without their radio links. 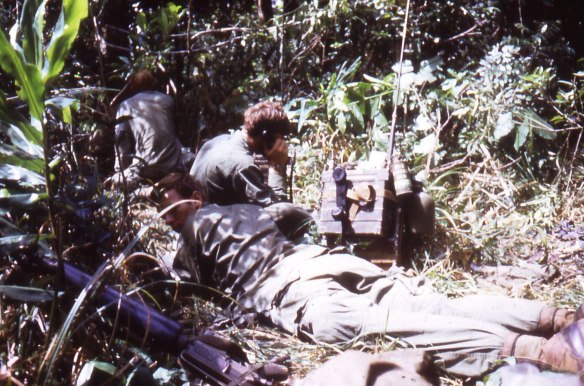 From 1965 the main field radio in Vietnam was the PRC-25 (‘Prick 25’).  You can find a detailed technical specification here, but here are the key passages:

‘The PRC-25 was about the size and weight of a case of soda. With its battery “can” included, call it a case of soda sitting on top of a six-pack. (It actually weighed slightly more than that, 23.5 pounds) There was a handle on each side at the top to carry it. The radio consisted of two parts, both in metal boxes, called “cans.” The upper can held the radio itself, the lower can held its battery pack. Metal buckles held the two together. The radio was tough and would easily survive a 50 foot fall from a helicopter onto a metal-planked runway. You could throw the whole thing in the water for an hour, completely submerged, then pull it out and expect it to work…

‘The radio antenna was exactly like a metal tape measure, but the bottom foot or so was a round flexible tube that screwed into the radio. There were actually two antennas, a regular one and a long-range antenna, carried in a canvas bag strapped to the side of the radio The radio had a transmission range, with the short antenna, of about 3-4 miles, but various terrain factors could influence this, of course. It helped to be higher up. The long range antenna was supposed to be good for up to 18 miles.

The rule of thumb was that the battery was good for about a day of casual operation, listening mostly, some occasional transmissions. In a period of intense use, transmitting/receiving all the time, it was good for perhaps 2-3 hours. The way the LRRPs [Long Range Reconnaissance Patrols] and SF [Special Forces] used it, shutting it off and only coming up at scheduled times to briefly transmit or listen, it was good for perhaps four days. Spare batteries were usually kept in a spare .30 caliber ammo can. When expended, the battery pack had to be physically destroyed. Inside were flashlight-type batteries which the Viet Cong could use in booby traps or to ignite bombardment rockets.’

Notice first the extraordinary weight of the thing.  I’ve detailed the loads humped by soldiers and Marines in Vietnam before, but you can see from this that the radio operator (RTO) was even more heavily burdened.  He also had to contend with a difficult load distribution: according to Rodger Jacobs ‘radiomen had to wear their radios on their chests because if worn on their backs the thickness of the jungle and the vines would constantly catch on the controls and change the frequencies.’  The best account of the trials and tribulations of an RTO that I know is Phillip Hoffman‘s appropriately titled Humping Heavy (right).

Then notice the size of the aerial (above); RTOs carried a ten-feet rigid mast in sections but much of the time used a three-feet whip antenna.  This made the RTO extremely vulnerable: not only was he a marked target, but he was always close to the platoon or patrol commander and so both were hi-vis priorities in an enemy attack or ambush.   For that reason the most prized possession of many RTOs was a North Vietnamese Army rucksack: ‘They’re better than anything the Corps has,’ Jeff Kelly was told.  ‘It’ll hang lower on your back and won’t catch on branches. But the big thing is you won’t be giving off that radioman silhouette.’  Most RTOs taped the antenna down, but Hoffman made the mistake of questioning the wisdom:

Right away he demanded I stuff the flexible, three-foot whip antenna down my shirt to limit me (and by extension him) as a target. He knew a priority of the enemy was to knock out communication, and our commo was located on my back. I complied with his directive but made the mistake of telling him our signal strength would suffer. In no uncertain words he told me never to question him again.

Even with a network of relay stations and airborne retransmissions, communications were uneven and intermittent: the terrain could block signals, especially in the Central Highlands, and rain (especially during the monsoon) could play havoc with reception.  At night even a whisper was dangerous; here is John Edmund Delezen:

Hourly situation reports are sent to the radio relay atop of Hill 950 some three kilometers north of the Khe Sanh airstrip. The “sit-reps” are not sent in the form of words-we dare not speak in the black void; when the relay asks us to acknowledge his call, there are just the two distinct pauses in the constant squelch as the handset is keyed twice. The two small audible clicks are all that connects us with the world, and all that assures the relay that we have not disappeared into the liquid black night.

It could be strangely remote for those receiving the transmissions too (above, an artillery fire support center).  Kenneth Sympson, an artillery officer, explained:

‘Our only contact with the men of the patrols was from radio transmissions—the infrequent call-in at a checkpoint or request for fire on some pretargeted location on their route. They were a noise on the radio and a trace on a map of the region. When you fired an artillery round in support, it was almost as if you were simply throwing it into the night and it just disappeared. It would later strike a place on the map, but there was no life there; there was only some representation for crossing trails or the contour lines indicative of the slope of a hill or a pin hole named Registration Point 3.’

Downs says much the same, describing gun crews anticipating ‘the release of their impersonal death into a grid square.’

But for those beyond the wire those staccato messages were far from abstract or impersonal.  ‘The radio was our link with literally everything outside our platoon,’ said Downs, ‘from supplies to survival’.  And without it, as he also said, ‘everything stayed put.’

Hence my title: and for those too young (or too old) to remember it, listen to this (YouTube).