Writing about the sensory armature of modern war seems to have two dimensions (and as usual it’s the relationship between them that matters).  One involves the political technologies used by advanced militaries to detect the physical presence of their enemies: the infrared sensors that form part of the multispectral targeting systems fitted to Predators and Reapers that can detect heat signatures of bodies, other sensors that can detect ‘chemical signatures’ associated with IED factories, and sophisticated signals monitoring equipment.  These are all prosthetic devices that extend the range of the human sensorium – though they also depend upon it – so that the other dimension, which remains stubbornly important even in later modern war, is constituted by the human body and its own sensory capabilities.  This was the central concern of the conference on Sensing War held over the summer, and you can find the abstracts from the meeting here (I particularly like the remark made by a Bundeswehr officer reported by Marion Naeser-Lather: ‘To understand Afghanistan, you have to see, hear, smell and taste it’).  It’s also a central theme of my lecture/essay on ‘The natures of war’.

While I was in Zurich I had a lively and productive discussion about the penultimate draft of that essay with Benedikt Korf, Timothy Raeymaekers, Rory Rowan and their students, and as a result of that, together with an e-conversation with Steve Legg, I’ve been re-thinking my previous ideas about corpography.  Steve drew my attention to the ways in which I describe senses being ‘out of place’ on the Western Front: tasting rather than feeling mud, for example, or feeling rather than hearing shell-fire.  You can find further examples in the extracts from the essay I’ve posted about the war in Vietnam here and here.  This scrambling of the senses seems to be different from the intersensoriality discussed by Concordia’s innovative Centre for Sensory Studies.

In response to a similar observation in Zurich, I suggested that the Enlightenment project involved a disciplining of the senses – establishing what it was permissible to see, to hear, to touch, to taste or to smell – and allocating epistemologies to each: what it was possible to know from seeing, hearing, and the rest.  And that perhaps these regulated divisions were undone and their epistemologies radically challenged by the intensity of experience on the battlefield.

Since then I’ve stumbled upon the wonderful work of Matt Leonard; see, for example, his exquisitely titled essay on the First World War, ‘A senseless war‘, in which he argues that

‘The Western Front was a world that could not be negotiated by temporarily reordering the operation of our senses, for the ‘temporary’ became a relative term in the hell of the trenches. Rather, the relationship with the environment had to be completely restructured.’

See also his splendid essay on ‘Mud in World War I’ from Military history here. 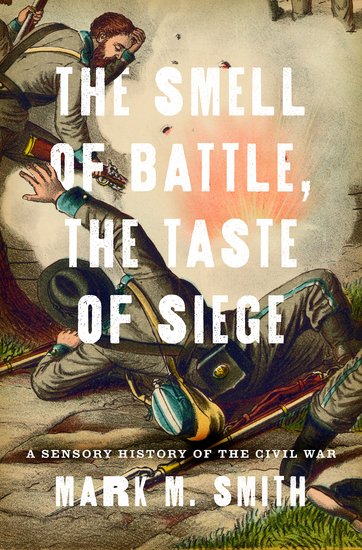 Perhaps closest to what I have in mind is Mark Smith‘s re-narration of the American Civil war in The smell of battle, the taste of siege (2014):

Historical accounts of major events have almost always relied upon what those who were there witnessed. Nowhere is this truer than in the nerve-shattering chaos of warfare, where sight seems to confer objective truth and acts as the basis of reconstruction. In The Smell of Battle, the Taste of Siege, historian Mark M. Smith considers how all five senses, including sight, shaped the experience of the Civil War and thus its memory, exploring its full sensory impact on everyone from the soldiers on the field to the civilians waiting at home.

From the eardrum-shattering barrage of shells announcing the outbreak of war at Fort Sumter; to the stench produced by the corpses lying in the mid-summer sun at Gettysburg; to the siege of Vicksburg, once a center of Southern culinary aesthetics and starved into submission, Smith recreates how Civil War was felt and lived. Relying on first-hand accounts, Smith focuses on specific senses, one for each event, offering a wholly new perspective. At Bull Run, the similarities between the colors of the Union and Confederate uniforms created concern over what later would be called “friendly fire” and helped decide the outcome of the first major battle, simply because no one was quite sure they could believe their eyes. He evokes what it might have felt like to be in the HL Hunley submarine, in which eight men worked cheek by jowl in near-total darkness in a space 48 inches high, 42 inches wide. Often argued to be the first “total war,” the Civil War overwhelmed the senses because of its unprecedented nature and scope, rendering sight less reliable and, Smith shows, forcefully engaging the nonvisual senses. Sherman’s March was little less than a full-blown assault on Southern sense and sensibility, leaving nothing untouched and no one unaffected.

One last thought: the identification (and limitation) of just five senses is a conventional, European construction, and so I’m left wondering about Steve’s final suggestion: that perhaps the intensity of experience in the deserts of North Africa and the Central Highlands of Vietnam reveals the dependence of the Cartesian model on particular ‘natures’ and, above all, on the ethnocentric privileges accorded to ‘temperate nature’ as ‘normal nature’.  These radically intemperate natures – the Western Front too – thus took their toll on more than the bodies of the soldiers who fought through them.