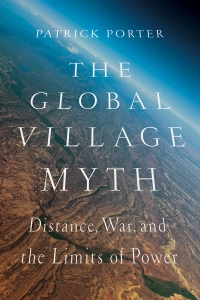 News from Patrick Porter of a new book due out in March, The global village myth: distance, war and the limits of power (from Hurst in the UK/Georgetown University Press in the US):

According to security elites, revolutions in information, transport, and weapons technologies have shrunk the world, leaving the United States and its allies more vulnerable than ever to violent threats like terrorism or cyberwar. As a result, they practice responses driven by fear: theories of falling dominoes, hysteria in place of sober debate, and an embrace of preemptive war to tame a chaotic world.

Patrick Porter challenges these ideas. In The Global Village Myth, he disputes globalism’s claims and the outcomes that so often waste blood and treasure in the pursuit of an unattainable “total” security. Porter reexamines the notion of the endangered global village by examining Al-Qaeda’s global guerilla movement, military tensions in the Taiwan Strait, and drones and cyberwar, two technologies often used by globalists to support their views. His critique exposes the folly of disastrous wars and the loss of civil liberties resulting from the globalist enterprise. Showing that technology expands rather than shrinks strategic space, Porter offers an alternative outlook to lead policymakers toward more sensible responses—and a wiser, more sustainable grand strategy.

You can get a preliminary preview of Patrick’s basic argument at War on the Rocks here.

1 thought on “War at a distance”