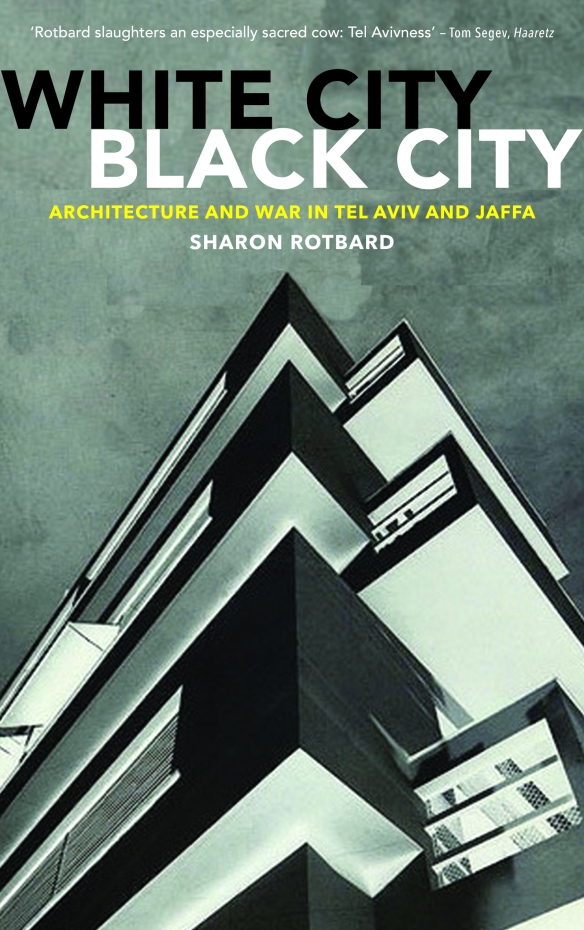 For those heading off to the International Conference on Critical Geography in Ramallah this summer, essential reading from Sharon Rotbard: White City, Black City: Architecture and War in Tel Aviv and Jaffa (MIT/Pluto Press, 2015) (first published in Hebrew in 2005).

In 2004, the city of Tel Aviv was declared by UNESCO a World Heritage Site, an exemplar of modernism in architecture and town planning. Today, the Hebrew city of Tel Aviv gleams white against the desert sky, its Bauhaus-inspired architecture betraying few traces of what came before it: the Arab city of Jaffa. In White City, Black City, the Israeli architect and author Sharon Rotbard offers two intertwining narratives, that of colonized and colonizer. It is also a story of a decades-long campaign of architectural and cultural historical revision that cast Tel Aviv as a modernist “white city” emerging fully formed from the dunes while ignoring its real foundation—the obliteration of Jaffa. Rotbard shows that Tel Aviv was not, as a famous poem has it, built “from sea foam and clouds” but born in Jaffa and shaped according to its relation to Jaffa. His account is not only about architecture but also about war, destruction, Zionist agendas, erasure, and the erasure of the erasure.

Rotbard tells how Tel Aviv has seen Jaffa as an inverted reflection of itself—not shining and white but nocturnal, criminal, dirty: a “black city.” Jaffa lost its language, its history, and its architecture; Tel Aviv constructed its creation myth. White City, Black City—hailed upon its publication in Israel as ”path-breaking,” “brilliant,” and “a masterpiece”—promises to become the central text on Tel Aviv.

There’s an excellent preview/review by Tom Sperlinger, ‘The “forced geography” of Tel Aviv‘, over at the electronic intifada:

At its heart, the book focuses on how Jaffa was all but absorbed into Tel Aviv and thus “ceased to exist as an urban and cultural entity” after 5,000 years. This focus on a city that isn’t there, which Rotbard describes as “an encyclopedia of ruins,” makes this a peculiar book to categorize.

It is not exactly a study of history or architecture. In fact, it can be quite frustrating as either, sometimes eliding past and present in the course of its argument. But it is compelling as a ghost story, in which the perpetual fictions created about Tel Aviv cannot obscure its past….[for a dissenting view, see the Comments at the electronic intifada]

Rotbard explains how in the decades since 1948, Tel Aviv has continued to push anything unwanted into the shadow city at its side:

Everything unwanted in the White City is relegated to the Black City: … garbage dumps, sewage pipes, high voltage transformers, towing lots and overcrowded central bus stations; noise and air pollution factories and small industries; illegal establishments like brothels, casinos and sex shops; unwelcoming and intimidating public institutions such as the police headquarters, jails, pathological institutes and methadone clinics; and finally, a complete ragtag of municipal outcasts and social pariahs — new immigrants, foreign workers, drug addicts and the homeless … Paradoxically, this has actually ensured that the Black City is the most colorful, heterogeneous and cosmopolitan city space in the whole of Israel. 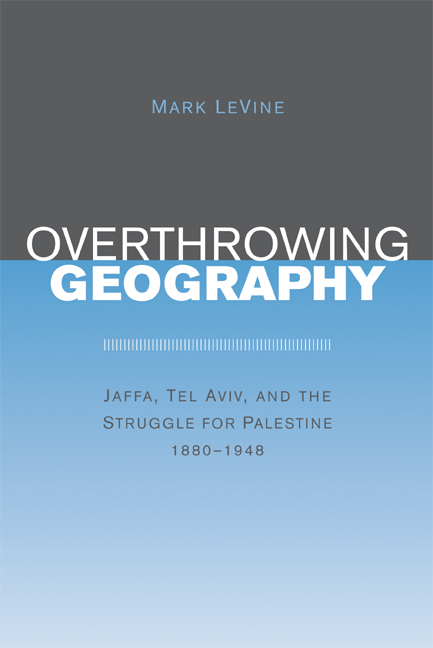 ‘Forced geography’ – Sharon’s own term – reminds me of one of my favourite books, also about Jaffa and Tel Aviv: Mark Levine‘s Overthrowing Geography: Jaffa, Tel Aviv, and the Struggle for Palestine, 1880-1948 (University of California Press), which was published in 2005 hard on the heels of the original edition of White City, Black City:

This landmark book offers a truly integrated perspective for understanding the formation of Jewish and Palestinian Arab identities and relations in Palestine before 1948. Beginning with the late Ottoman period Mark LeVine explores the evolving history and geography of two cities: Jaffa, one of the oldest ports in the world, and Tel Aviv, which was born alongside Jaffa and by 1948 had annexed it as well as its surrounding Arab villages. Drawing from a wealth of untapped primary sources, including Ottoman records, Jaffa Shari’a court documents, town planning records, oral histories, and numerous Zionist and European archival sources, LeVine challenges nationalist historiographies of Jaffa and Tel Aviv, revealing the manifold interactions of the Jewish and Palestinian Arab communities that lived there.

At the center of the book is a discussion of how Tel Aviv’s self-definition as the epitome of modernity affected its and Jaffa’s development and Jaffa’s own modern pretenses as well. As he unravels this dynamic, LeVine provides new insights into how popular cultures and public spheres evolved in this intersection of colonial, modern, and urban space. He concludes with a provocative discussion of how these discourses affected the development of today’s unified city of Tel Aviv–Yafo and, through it, Israeli and Palestinian identities within in and outside historical Palestine.

1. Modern Cities, Colonial Spaces, and the Struggle for Modernity in the Eastern Mediterranean
2. From Cedars to Oranges: A History of the Jaffa–Tel Aviv Region from Antiquity to the Late Ottoman Period
3. Taming the Sahara: The Birth of Tel Aviv and the Last Years of Ottoman Rule
4. Crossing the Border: Intercommunal Relations in the Jaffa–Tel Aviv Region during the Mandate Period
5. A Nation from the Sands? Images of Jaffa and Tel Aviv in Palestinian Arab and Israeli Literature, Poetry, and Prose
6. Ceci N’est Pas Jaffa (This Is Not Jaffa): Architecture, Planning, and the Evolution of National Identities in Jaffa and Tel Aviv, 1880–1948
7. Planning to Conquer: The Role of Town Planning in the Expansion of Tel Aviv, 1921–1948
8. The New-Old Jaffa: Locating the Urban, the Public, and the Modern in Tel Aviv’s Arab Neighborhood

POSTSCRIPT: A welcome reminder from Léopold Lambert of his interview with Dena Qaddumi (right) earlier this year on the spatial politics of Jaffa-Tel Aviv:

It attempts to propose a struggle narrative for Palestine that is not focused on Jerusalem to which many of us contribute, thus participating to a debate mostly focused on the 1967 war. By examining the spatial politics of Jaffa-Tel Aviv, Dena attempts to show that similar “ethnoocratic” logics of segregation are also at work in an environment admittedly less militarized. This logic also incorporates the same capitalist mechanisms of gentrification at work in other cities of the world. We begin by an historical approach to the “black” and “white” cities — using Sharon Rotbard’s terminology — before addressing its current situation, in particular from an architecture point of view, symptoms of the spatial violence at work within the city.