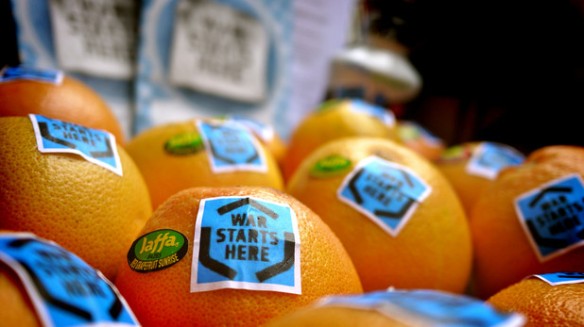 A postscript to my previous post about Palestine, solidarity and BDS.  Over at Books & Ideas, Benjamin Ferron has a review essay on Ingrid Nyström and Patricia Vendramin, Le boycott (2015): Globalisation and the art of boycotting.

There’s some succinct historical context, tracing the politics of boycotts back to the late seventeenth century, but then this about the current Boycott, Disinvest, Sanctions movement:

‘Launched in 2005 at the request of Palestinian intellectuals and academics, and supported by 172 Palestinian civil society organisations, it calls for an economic, academic, cultural and political boycott of the state of Israel to protest against the colonisation and occupation of Palestinian territories, the construction of the Wall of separation and annexation, and campaign in favour of the equality of Israeli Arab and Jewish citizens, and the acknowledgement of the Palestinian refugees’ right of return. The penalisation of these actions in Israel and in France (through the so-called Alliot-Marie circular) shows that this mode of action is threatening to the intended targets or their allies.’

I knew about moves by the Cameron government in the UK and the now mercifully extinct Harper government in Canada to outlaw BDS – the irony of the former Prime Minister threatening to use ‘hate laws’ against anyone with whom he disagreed is wholly unexceptional –   but I now realise that their authoritarian response is much wider than I had imagined, and for the reasons supplied by those last eight words in the quotation.

Of particular relevance to the upcoming plenary at the AAG is this report from Glenn Greenwald at The Intercept that details attempts in the US to suppress pro-Palestinian voices and peaceful actions: ‘Greatest Threat to Free Speech in the West: Criminalizing Activism Against Israeli Occupation‘.