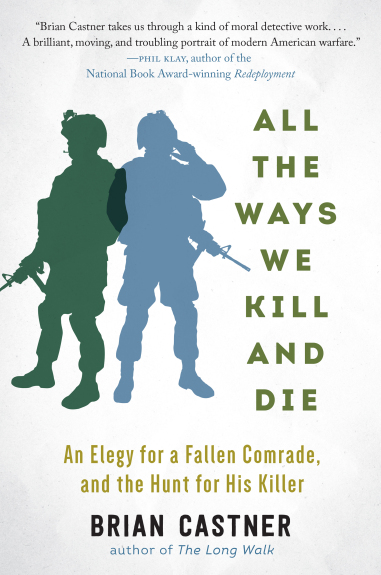 I’ve noticed Brian Castner‘s astonishing work before – see my post here – and I’m now deep into his latest book (published on my birthday).  I’ll write a detailed response when I’m finished, but it is so very good that I wanted to give readers advance notice of it.  It’s called All the ways we kill and die (Arcade, 2016):

The EOD—explosive ordnance disposal—community is tight-knit, and when one of their own is hurt, an alarm goes out. When Brian Castner, an Iraq War vet, learns that his friend and EOD brother Matt has been killed by an IED in Afghanistan, he goes to console Matt’s widow, but he also begins a personal investigation. Is the bomb maker who killed Matt the same man American forces have been hunting since Iraq, known as the Engineer?

In this nonfiction thriller Castner takes us inside the manhunt for this elusive figure, meeting maimed survivors, interviewing the forensics teams who gather post-blast evidence, the wonks who collect intelligence, the drone pilots and contractors tasked to kill. His investigation reveals how warfare has changed since Iraq, becoming individualized even as it has become hi-tech, with our drones, bomb disposal robots, and CSI-like techniques. As we use technology to identify, locate, and take out the planners and bomb makers, the chilling lesson is that the hunters are also being hunted, and the other side—from Al-Qaeda to ISIS— has been selecting its own high-value targets.

This is how Brian himself describes the book:

In January of 2012, a good friend of mine–Matt Schwartz from Traverse City, Michigan–was killed in Afghanistan. Matt was an Explosive Ordnance Disposal technician. We had the same job, but while I had done my two tours in Iraq and went home, Matt deployed again and again and again. He was shot on his second tour, and died on his sixth.

I realize now that I was bound to do an investigation into his death; my training demanded it. But instead of asking “what” killed him–we knew immediately it was a roadside bomb–I asked “who” killed him. It’s a question that would not have made any sense in past wars, not even at the start of this one. But we have individualized the war, we target specific people in specific insurgent organizations, and in the course of my research, I discovered the leaders on the other side do the same in reverse to us.

This is the story of an American family at war, and the men and women who fight this new technology-heavy and intelligence-based conflict. I interviewed intel analysts, biometrics engineers, drone pilots, special operations aircrew, amputees who lost their legs, and the contractors hired to finish the job. They are all hunting a man known as al-Muhandis, The Engineer, the brains behind the devices that have killed so many soldiers in Iraq and Afghanistan.

You can read an excerpt at VICE (‘The problem with biometrics at war‘) and another at Foreign Policy (‘You will know the Bomber by his designs‘).

Reading this in counterpoint to Harry Parker‘s  Anatomy of a soldier (see my post here) – both deal with the aftermath of an IED in Afghanistan – is proving to be a rich and truly illuminating experience.