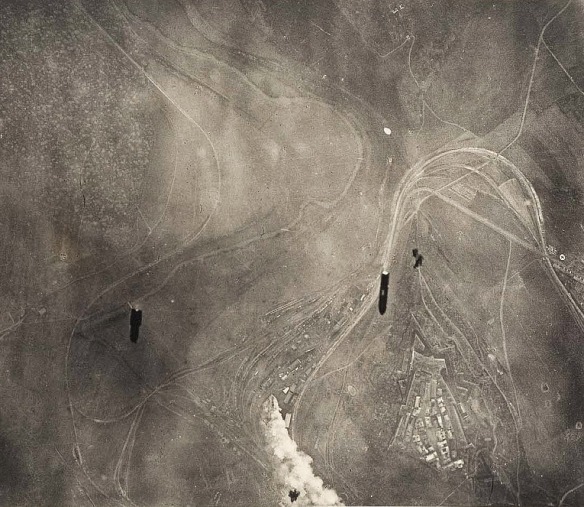 As I work on the text of “Reach from the Sky”, I’ve been revisiting the role of Edward Steichen in the development (in fact, the industrialisation) of air photography on the Western Front.  As I noted, all too briefly, in ‘Gabriel’s map’ (DOWNLOADS tab), Steichen commanded the photographic division of the American Expeditionary Forces. He organised the 55 officers and 1,111 men under his command into what Paul Virilio described as ‘a factory-style output of war information’ that ‘fitted perfectly with the statistical tendencies of this first great military-industrial conflict’. 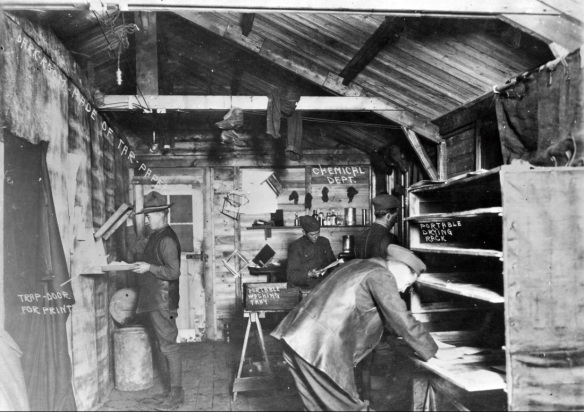 The classic source on Steichen’s assembly-line methods of reproduction (and much more) is Allen Sekula‘s essay, ‘The instrumental image: Steichen at war’, in Artforum 14 (1975) 26-35 [see also the image above]:

The establishment of this method of production grew out of demands for resolution, volume, and immediacy. No method of reproduction but direct printing from the original negative would hold the detail necessary for reconnaissance purposes. Large numbers of prints from a single negative had to be made for distribution throughout the hierarchy of command. In addition, the information in prints dated very rapidly. Under these circumstances, efficiency depended on a thorough-going division of labor and a virtually continuous speedup of the work process. Printers worked in unventilated, makeshift darkrooms; 20 workers might produce as many as 1,500 prints in an hour, working 16-hour shifts.

Analytically the essay has never been surpassed, but now there is a new book that fills in the biographical details of Steichen’s service during the First World War: Von Hardesty‘s Camera Aloft: Edward Steichen in the Great War (Cambridge, 2016): 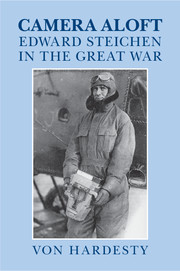 Edward Steichen (1879–1973) played a key role in the development of photography in the twentieth century. He is well known for his varied career as an artist, a celebrated photographer, and museum curator. However, Steichen is less known for his pivotal role in shaping America’s first experiments in aerial photography as a tool for intelligence gathering in what may be called his “lost years.” In Camera Aloft, Von Hardesty tells how Steichen volunteered in 1917 to serve in the American Expeditionary Forces (AEF). He rose rapidly in the ranks of the Air Service, emerging as Chief of Air Photography during the dramatic final offensives of the war. His photo sections were responsible for the rapid processing of aerial images gained through the daily and hazardous sorties over the front and in the enemy rear areas. What emerged in the eighteen months of his active service was a new template for modern aerial reconnaissance. The aerial camera, as with new weapons such as the machine gun, the tank, and the airplane, profoundly transformed modern warfare.

Here is the table of contents:

Foreword: taking the camera aloft
1. War and exile
2. A new life in the military
3. Over there
4. The world of air observation
5. Taking charge
6. Over the front
7. War and photography
Appendix: life at the cutting edge: the photo sections.

The book includes stunning reproductions of photographs (from which I’ve borrowed the annotated image of the Photographic Section above): you can see a selection from the book here.  Other Steichen aerial imagery from the period is here and here.

As you’ll be able to see when I’m finished, I’m no less interested in Steichen’s work during the Second World War, and in particular the various photographic projects he directed in the Pacific that captured – and celebrated – the masculinism and homosociality of modern war (here the work of Horace Bristol is especially revealing).

But right now it’s the industrialisation of aerial imagery that is capturing my attention.  It’s a commonplace that the First World War was industrial warfare on the grand scale, of course, but often our attention is distracted by the killing machines and mechanisms themselves – the gas, the tanks, the aircraft – and we lose sight of the assembly-line logic that animated the slaughter not only during but also before and after. 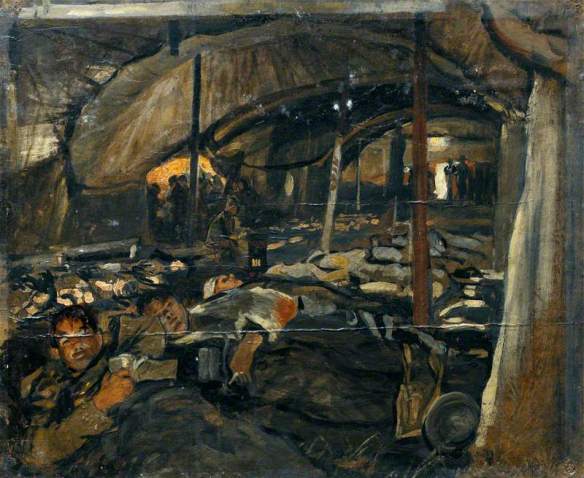 You can see it in Steichen’s production line, but there are countless other examples.  Last summer I was working in the Friends’ Library in London, recovering the role of the Quakers in providing medical care on the Western Front as part of my research on casualty evacuation, when I encountered this extraordinary passage that speaks directly to the relentless motion of the killing machine (see also my ‘Divisions of Life’ here).  It’s a medical orderly’s account of loading an ambulance train, written some time in 1915:

Down in a hedged field at the end of the straggling mining village lies the casualty clearing station, some two-score large tents… Since midday the [casualty] clearing station has been full to overflowing, but still an endless line of motor ambulances moves down along the crowded road from the fighting line, through the village and into the muddy field. It is night now, starless and dark as pitch, and a lashing rain is driven hard in your face before a bitter and rising wind; but still the cars are discharging their pitiful loads in dreary succession when the train is brought into the siding which serves this desolate little camp. 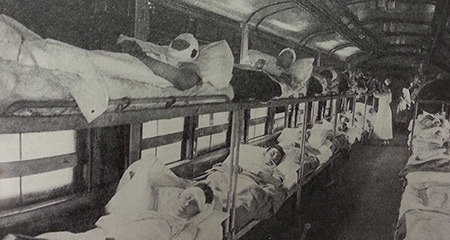 From the train itself you can scarcely see anything of the clearing station tonight; only the headlights of the cars as they turn in through the gate, and a few hurricane lamps flickering here and there. Near one end of the train, at the wooden footbridge which crosses the stream separating the camp from the railway track, there stands a powerful acetylene flare, casting a circle of vivid light on the deep mud of the path. Save for three or four feeble oil-lamps on the ground beside the long darkened train, this is the only light at the loading place. A few moments of uncertain waiting, and the first stretcher comes down, its weary bearers slithering and stumbling in the watery mire. As you watch the flare you see them emerge suddenly from the utter blackness beyond into the fierce glare of the light; they halt for a moment, while a cloaked officer standing on the bridge raises the waterproof sheet which protects the wounded man’s face from the beating rain; a name is given and noted; the covering is dropped over the head, and the bearers move on again, seeing to vanish as if by magic as they pass with their burden out of the light into the enveloping blackness. A pause, another stretcher enters the circle of light; the same words pass, the same motions, and it too move son, blotted out as suddenly as it appeared. Watching this time after time, you feel as if a picture were being cast on a screen and flashed off, over and over again: for there is something cruelly mechanical about it all. 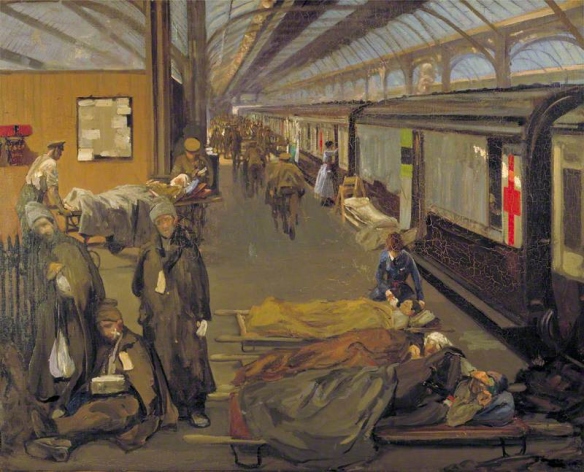