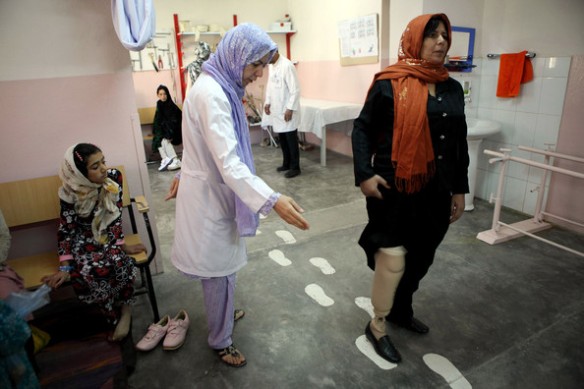 An update to my discussion of ‘The prosthetics of military violence‘: Gizmodo has published an arresting series of images from the ICRC’s rehabilitation centre in Kabul.  As Jamie Condliffe notes, and as I tried to show in that extended post:

Last week, bioengineering’s most advanced prosthetics were shown off at the world’s largest orthopedics event in Germany. But in Afghanistan, things are a little different.

These photographs, from AP, show the work being carried out at the International Committee of the Red Cross’s physical rehabilitation center in Kabul, Afghanistan. There, those who have suffered the loss of a limb — whether children with birth defects or adults who’ve been injured in war — are fitted with the best prosthetics the ICRC can provide.

As you can see, they’re not quite as advanced as those shown off in Germany last week. Think less of carbon fiber and 3D printing, and more of plaster and orbital sanders.

An Afghan employee of the International Committee of the Red Cross (ICRC) works on a prosthetic leg at the ICRC physical rehabilitation center in Kabul, Afghanistan, Tuesday, May 10, 2016. Afghanistan is one of the world’s most heavily mined countries. (AP Photo/Rahmat Gul)

You can find many more remarkable photographs from the ICRC centre at Getty Images here.