Many readers will already know of Banksy‘s most recent project – the Walled Off [not Waldorf!] Hotel on Caritas Street in occupied Bethlehem, which opened earlier this month.  The hotel’s website is here, and this is extracted from the FAQ:

The hotel is located in a bustling area fully open to tourists from across the world. It has all the restaurants, bars and taxis you’d expect. We’re 500 metres from the checkpoint to Jerusalem and a mile from the centre of Bethlehem…

You don’t need a visa to enter Israel as a tourist and you can stay for up to 3 months. Visitors entering via Tel Aviv airport are given an entry card in their passport. So, unlike the locals, you’ll be permitted to travel wherever you wish.

The Walled Off Hotel is an entirely independent leisure facility set up and financed by Banksy. It is not aligned to any political movement or pressure group. The aim is to tell the story of the wall from every side and give visitors the opportunity to discover it for themselves. We offer an especially warm welcome to young Israelis.

The artist paid for the installation costs and has now handed it over as an independent local business. The aim is to break even and put any profits back into local projects. 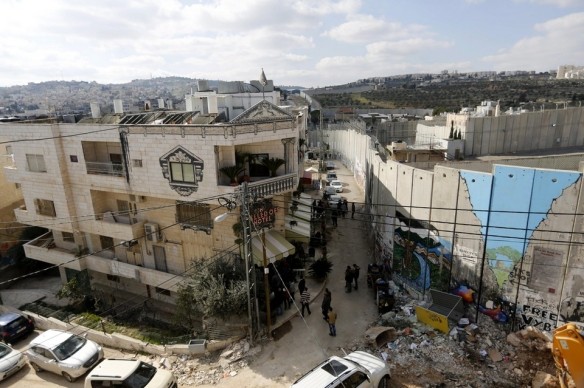 You can find more images here.

Jamil Khader provided an insightful commentary on the project – especially the resonances with the colonial architecture of the Balfour Declaration and, amongst the installation-hotel’s many internal installations, the Gaza Memorial – for al Jazeera here.  And now Jamil has provided a longer, spellbinding commentary over at the Middle East Research and Information Project (MERIP) here.  Here’s a key extract in which he discusses what he calls ‘Occu-tourism and the commodification of Palestinian suffering’:

Instead of culturalizing the political struggle and coopting it in the language of multicultural tolerance, Banksy draws attention to the contradictions of Palestine’s captive economy under occupation, and especially the sociopolitical effects of occu-tourism on the commodification of Palestinian suffering and oppression. For Banksy, no political solution is viable without sustainable economic independence.

The Walled Off Hotel itself was allegedly planned to help reinvigorate the local economy in the Bethlehem area, by providing employment opportunities for local residents struggling for decent living under conditions of scarcity. However, it is not clear how such revenues can be generated and how sustainable they can be given the low daily rate charged for the limited number of rooms on offer. While other businesses in the same area have fallen off a cliff as a result of the wall, it is also unclear how this business can survive and thrive. And this is the point. 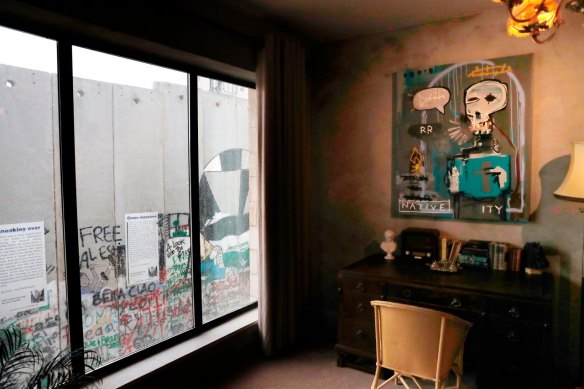 The installation-hotel thus becomes a parody of the many occu-touristic commercial ventures and other forms of alternative tourism and entrepreneurial activities that have developed around the occupation and apartheid wall in Palestine, both by Palestinians and international solidarity movement activists. However, some of these occu-tourism enterprises can collapse into staged spectacles for the entertainment of vacationing international travelers, who enjoy the adrenaline of confrontations with the Israeli military. Moreover, occu-tourism elevates Palestinian suffering into an ontological condition and erases histories of Palestinian agency and resistance. Rebecca Gould has thus correctly pointed out that “suffering is nowhere as globally implicated or heavily interpolated into the global public sphere as it is in Palestine.”

Nonetheless, the installation-hotel aims to move occu-tourists and other international travelers out of their comfort zone and educate them in the Palestinian struggle for freedom. First, Banksy invades the private space of these visitors by reworking a classic Western pastoral painting, in which he inserts a futuristic or cubistic bulldozer into the private space of a European family. He thus turns the idyllic rural European scene from Western art into a horror scene which is all too common in Palestine.

Furthermore, the installation-hotel provides ample opportunities for these visitors to educate themselves about the Palestinian struggle…. Many high quality photographs and posters present facts about the settlements, the wall, and checkpoints. In one interesting glass case, a cross-section from the earth reveals the contrast between the Palestinian and Israeli underground water distribution systems: The narrow rusty iron pipes used in Palestine pale in comparison to the thick, wide copper pipes that Israel uses in controlling the water resources and consumption in the West Bank.

A section of the wall in the educational area also pays tribute to the boycott, divestment and sanctions (BDS) movement. It presents a sample of some major products, including Coca-Cola cans, Sabra salads and Ahava Dead Sea personal care items—all of which have been the target of the BDS. There is also information about BDS’ impact and reception around the world. In an adjacent section, a video loop plays the testimonies of former Israeli soldiers, detailing their daily violations of Palestinian human rights.

More importantly, Banksy situates occu-tourism within the contradictions of the Palestinian captive economy under occupation and the global capitalist economy in general. According to early reports, Banksy has also placed Israeli products in the hotel rooms, including Dead Sea bath minerals, in a clear statement about the ironies of Palestinians ultimately financing their own occupation.

Do read the whole essay (Jamil is particularly good on the image I’ve reproduced below).

There is, incidentally, another hotel – often known as the Banksy Guest House – in Bethlehem, and for a discussion of local (critical) reactions to the project see here.  The issue is not only about the impact on the local economy (to which the FAQ above respond effectively, I think) but also the more general issue confronting so many artistic interventions:

“I see how [Banksy’s] work brings a lot of people to Bethlehem to see the wall and the city,” says Ayed Arafah, another local artist. “But now all the people who come to take photos of the paintings and graffiti… it’s become like Disneyland. Like you are living in a zoo.”

But I also think Jamer’s commentary squares that vicious circle too.  See what you think.