I’m just back from an invigorating conference on ‘The Intimacies of Remote Warfare’ at Utrecht – more on this shortly – and it was a wonderful opportunity to meet old friends and make new ones.  Chris Woods gave an outstanding review of air strikes in Iraq and Syria, and told me of an interview Airwars had conducted with Azmat Khan and Anand Gopal whose forensic investigation of civilian casualties in Iraq I discussed in a previous post.  The US-led Coalition has still not responded to their findings, even though they initially afforded a remarkable degree of co-operation.

The full interview really is worth reading, but here is Azmat explaining how their joint investigation started:

We began planning this in February 2016. By April I was on the ground [In Iraq] and I was embedding with local forces, both Shia militias and then with Peshmerga forces, in certain frontline towns. I remember early on seeing how pivotal these airstrikes were in terms of re-taking cities.

There was one town that was really important to Shias, and so dozens of Shia militias had tried to retake it — Bashir — from where ISIS had launched mortars with chemical agents into a neighboring town, Taza. I watched several Shia militias based in Taza try and fail to retake Bashir, putting in all of their troops. Then the peshmerga agreed to try and retake it, and they put in maybe a fraction of the number of troops, but were supported by Coalition airstrikes in a way the militias weren’t, and Bashir fell within hours.

It really showed me the extent to which these airstrikes played a pivotal role in re-taking territory, but also the level of devastation. Many parts of Bashir were just up in smoke, when I visited the day after it was re-taken. 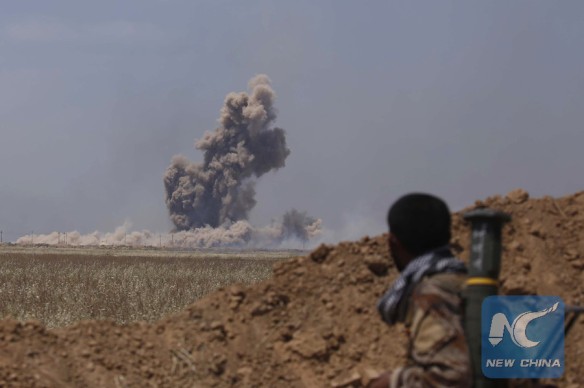 Unless you were on the ground, you couldn’t get a real sense of that scale. There’d been good accounts looking at civilian casualties — but nobody had looked at both those that successfully hit ISIS targets and those that didn’t, so a systematic sample. That’s what we teamed up to do. As more cities were being retaken, we though there’s an opportunity to do this….

In terms of verifying allegations, our work went far beyond interviews and analyzing satellite imagery. In addition to interviewing hundreds of witnesses, we dug through rubble for bomb fragments, or materials that might suggest ISIS use, like artillery vests, ISIS literature, sometimes their bones, because nobody would bury them.

We also got our hands on more than 100 sets of coordinates for suspected ISIS sites passed on by local informants. Sometimes we were able to get photos and videos as well. And ultimately, we verified each civilian casualty allegation with health officials, security forces, or local administrators.

The interview also revisits the attack on the Rezzo family home, a pivot of their NYT essay, which includes even more disturbing details.  As Azmat and Anand explain, this was a strike which ought to have shown Coalition targeting at its most adept; far from it.

Khan: This is a deliberate airstrike, not a dynamic one. It was an “ISIS headquarters,” which we were told, when I was at the CAOC (Combined Air Operations Center), a very senior intelligence officer told me that a target with one of the highest thresholds to meet is usually an ISIS headquarters… In so many ways Basim’s case was the ultimate, highest most deliberative process.

Airwars: When you say the best case scenario, you mean the best case on the Coalition side in terms of what intelligence they could have, and they still screwed up in such a fundamental way?

Gopal: if there was ever a strike they could get right, this would be the one. They have weeks to plan it, they have it as an ISIS headquarters. And so you know, if it’s an ISIS headquarters, the threshold for actionable intelligence has to be much higher. It can’t just be drone footage that doesn’t see women and children.

Airwars: They identified it as a headquarters and what was the genesis of that? In the story you talk about – it’s infuriating to read – that they didn’t see women and children.

Khan: One of the things I asked at the CAOC in Qatar was how do you identify local patterns of behavior. For example, I said, under ISIS a lot of women are not leaving their homes. So when you are looking at these pattern of life videos, are you taking these variable local dynamics into account? How do you distinguish for example when you are bombing in Iraq and one of these areas, how do you distinguish between patterns of behavior that are specific to Iraq vs. bombing in Afghanistan. What are the differences?

Gopal: At the end of the day, it appears there are no consequences for getting it wrong, so there are no incentives to try to get it right.